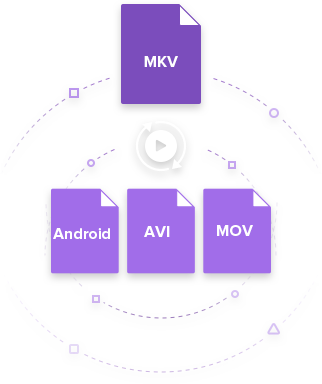 MKV is a container file format developed by MATROSKA. Since it is a completely new file format, many Android devices still cannot directly stream this file format, and that is an issue for Android users. Naturally, this issue really gets on the nerves of many people. But with the passing times, quite a few solutions have been introduced to handle this situation. Today we are going to discuss how to play MKV files on Android using various methods available through this article.

One of the top two methods to play MKV on Android is to convert the file type MKV into any of the Android supported file formats. But you have to be extremely careful while doing this as you don’t want to destroy the file by messing with its format. The other method is to convert the MKV file into a preset Android device compatible file. Wondershare UniConverter (originally Wondershare Video Converter Ultimate) with its huge range of features serves as the best way of implementing these 2 methods to play MKV on Android. It can convert MKV into 150+ other formats! The user interface is also so user friendly and intelligently designed to help the new users. So, now let’s learn how to convert MKV to MP4.

The very first step is to download and run the software. Please make sure you're downloading the right version to your PC operating system.

Once the software is launched, it’s time to add the MKV files you want to convert using the software. Simply click on the

option or drag & drop them onto the software interface.

On the right side of the software interface, you’ll find all the available formats that you can convert your MKV files into. RMVB, FLV, MP4, MKV, AVI and 3GP are all supported by Android device, just select one you prefer. 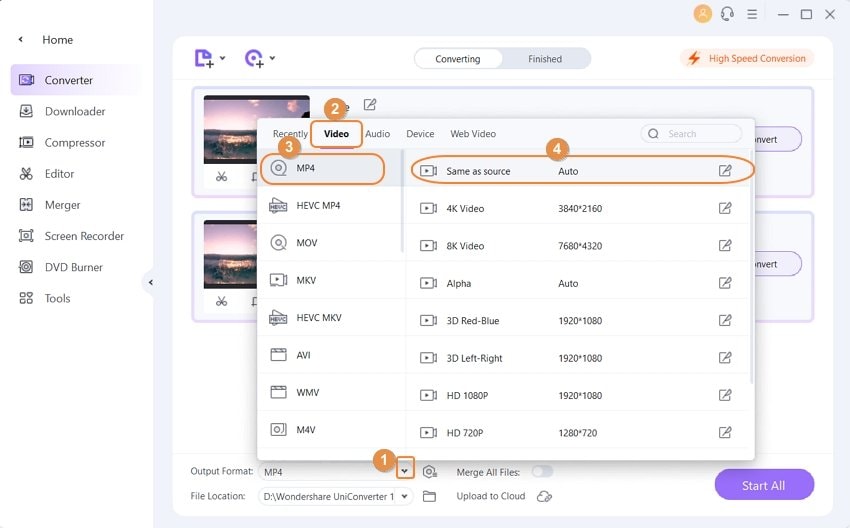 Finally, just hit the Start All button to begin the process of converting your MKV file into the format of your choice. It may take a few minutes or more for this process to complete, depending on the size of your MKV file. 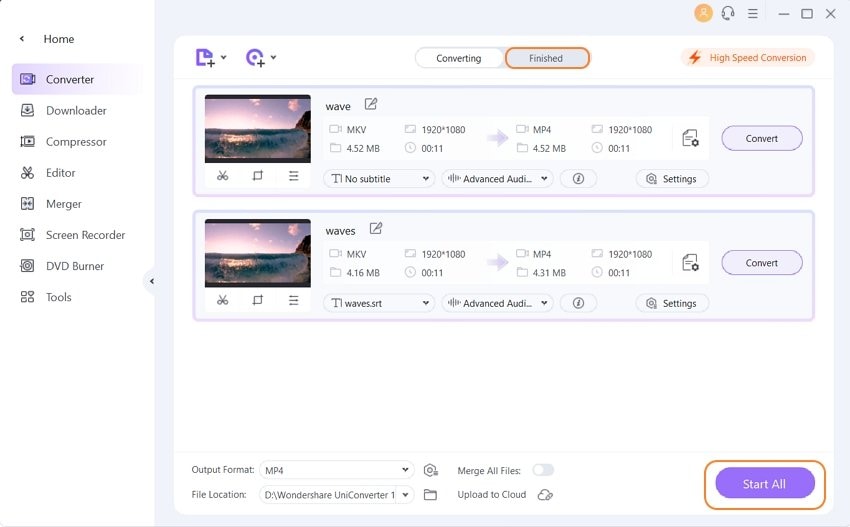 Congratulations! You are done with the first method. Now, you can simply transfer the converted file to your Android device and play it.

Wondershare UniConverter is truly a lifesaver for the not-so-tech-savvy among us. It comes with a ton of preset modes optimized for the various devices from Apple, Windows, Android, Zune, and other VR and gaming consoles. You can also use one of these preset modes to quickly and easily convert your MKV file to a file format that is compatible with your particular device. The first 2 steps in this method are similar to the ones we used in Method 1 (given above). Let’s take a look.

Launch the software and load the MKV files you want to convert.

For this step, go to the drop-down list of Output Format: and click the Device. There you'll see a lot Android device name for your choice, just select the corresponding device you want to play the converted MKV file with. See the image attached. Finally, hit the Start All button to Convert MKV Videos to Android. 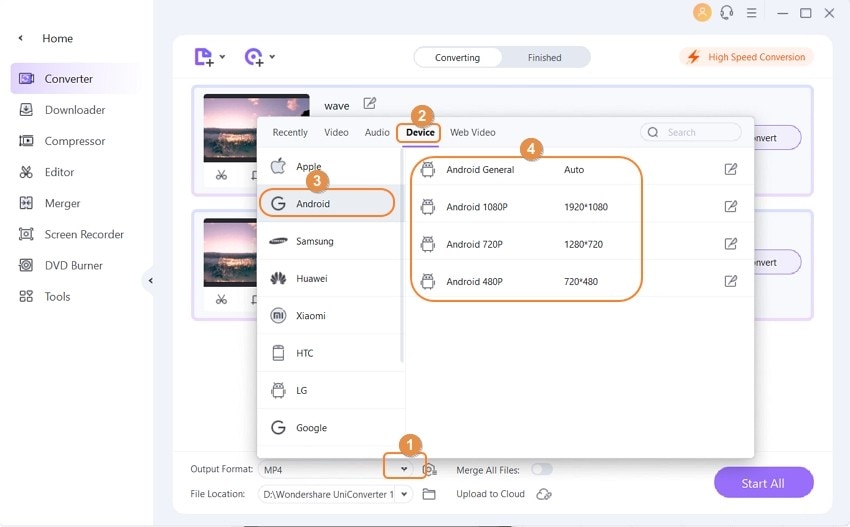 That’s it, once you’ve selected your particular device from the list of options, just hit the Convert button to convert the MKV file. What you’ll get after this process would be a file that will be easily played on your Android device.

With Wondershare UniConverter, you can convert MOV to MP3 easily. Move to How to Convert QuickTime MOV to MP3 Easily on Windows/Mac >> to learn more.

Before we get into the details of the 2 methods to play MKV on Android, here’s a quick look at four of the most popular and safe apps that can help play MKV on Android phones and tablets. You can choose any one of them for playing MKV in Android.

Wondershare Player for Android is a popular application used to play MKV on Android Phone. The greatest advantage of this application is that it can be directly be downloaded from the Google Play Store. It has a desktop version too which is known as Wondershare UniConverter (originally Wondershare Video Converter Ultimate). Of all the 4 MKV Players, Wondershare Player has the simplest and easiest to use interface. 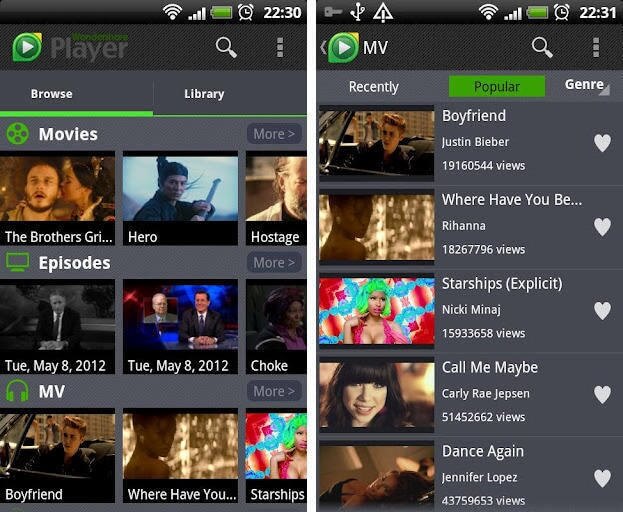 MoboPlayer is another one of the best 3rd party video, audio players available for Android devices. It can also be used to stream MKV to Android. Though it has a relatively complex interface, it isn’t as complex as some of the other players out there and is still very much usable. It was once on the top of the Android Players list. Over the years, its popularity has decreased a bit. 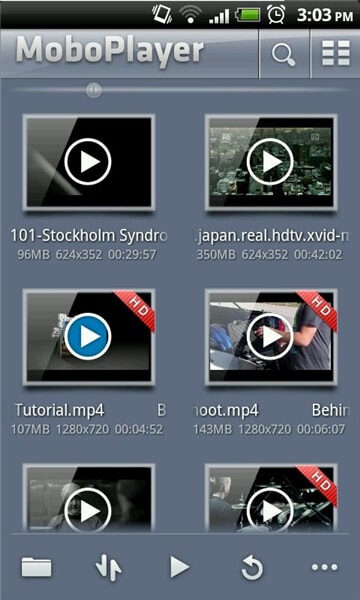 MX Player has been around for some time and is still one of the most popular players for Android. One of the prime reasons for that is its extremely simple and friendly user interface. Like the Wondershare Player, MX Player too can be directly downloaded from the Google Play Store. 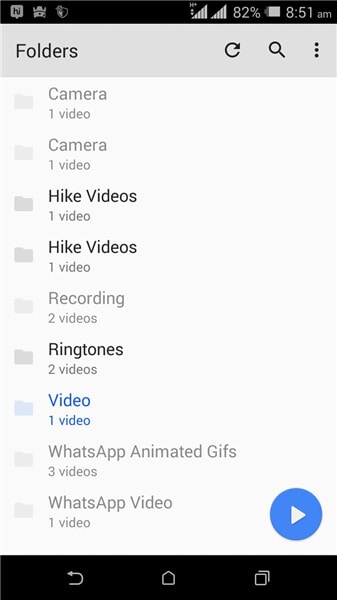 A relatively new software, RockPlayer2 is still a bit crude and needs a lot of bug fixes to reach the desired final state of tune. But it has already started winning the hearts of people all over the globe. This is due to its extremely simple to use nature and quick processing power. 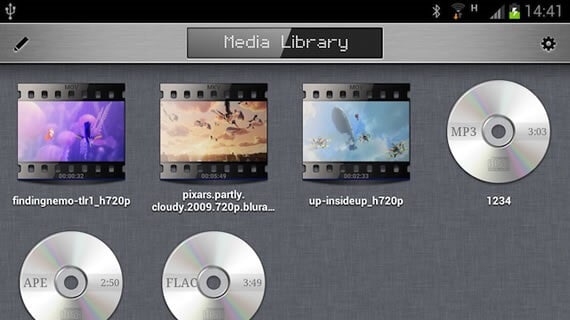 Here are some additional tips that’ll help in playing the MKV file properly on your Android device.

So, I hope that you had a great time learning how to play MKV on Android devices.