How to Play WMV Files with VLC

Part 1. What is WMV File

WMV is a video format and developed by Microsoft to play videos on Windows computers. WMV format stands for windows media video aiming at streaming several applications online. This format is also known as compression format that enables you to convert bigger files in the smaller and more manageable files. This file format is readable in most famous video players such as VLC, windows media player classic, Mplayer or RealPlayer. But if you are looking to play this WMV format on your Mac, I'm afraid not because the Microsoft codecs that WMV format uses are not readable by Mac operating system.

Part 2. How to Play WMV with VLC Media Player on Mac

As mentioned above, there're chances of Windows users to play WMV files with VLC media player, but not possible on a Mac operating system. Now to solve all these issues, the only quick and fast solution to that is converting your WMV files to other VLC supported formats. You can get help with Wondershare UniConverter (originally Wondershare Video Converter Ultimate).

Part 3. How to Solve "VLC Not Playing WMV" Issue

The quickest way is to turn to Wondershare UniConverter (originally Wondershare Video Converter Ultimate) Software, as the name puts, it converts WMV files or any other format file to different formats as per user requires. This software supports 1000+ audio video formats and allows you to convert your files from one format to another very easily and quickly. With it, you can effortlessly play WMV with VLC after converting WMV to VLC supported formats. This software also works as a downloader, media streamer and DVD burner as well. There are countless features available in Wondershare UniConverter (originally Wondershare Video Converter Ultimate) that allows you to do whatever you want with your video files and gives you a complete video solution.

Step 1 Download Wondershare UniConverter (originally Wondershare Video Converter Ultimate) via the download button above, and then follow the on-screen instructions to install it on your Mac. Launch it afterwards and make sure you're downloading the Mac verison.

Note: The Windows version functions almost the same as the Mac screenshots.

Step 2 By default, you will be on the Video Converter tab of the software. Now you have to add WMV files to the software interface, just click on the

button. Or you can use the diect drag-and-drop way to import WMV files to the software.

Step 3 After adding files in the software interface, click the

icon beside Output Format: and select Video > MP4 (or other formats compatible with VLC on Mac) and choose a video resolution in the right. 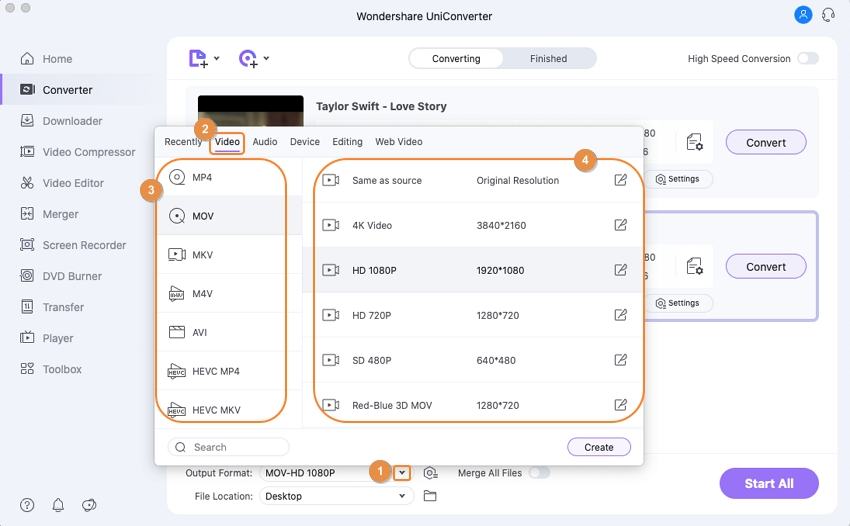 Note: Aside from converting WMV files into other formats, you can directly play WMV files with the built-in Wondershare player.

Step 4 Now click on the Start All button in the software interface, it will convert automatically and you can see these converted files in the output folder after a while. 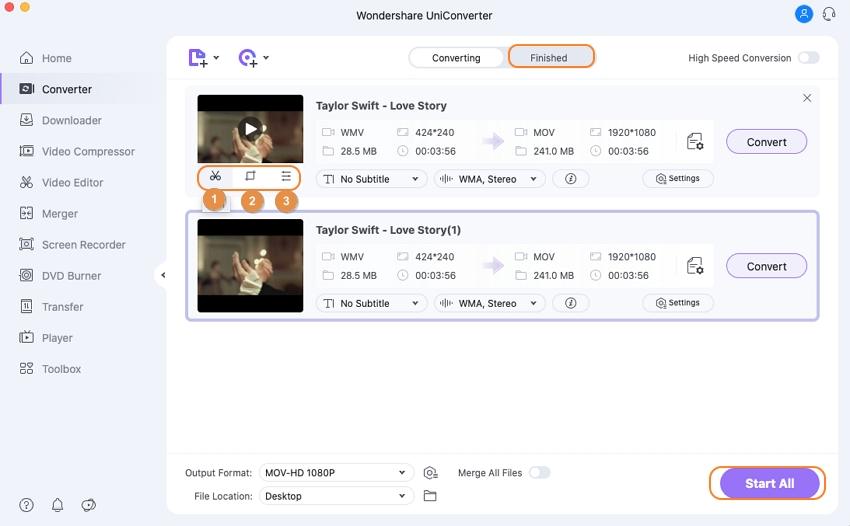 Note: Output folder is in the bottom middle area of the interface and you can change output folder for converted files yourself.