KMplayer vs VLC Media Player, Which is Better

What is KM Player

KM Player the original name of which is K-Multimedia player is media player that has been exclusively developed for windows and it support almost any format that windows can play. The supported formats have a wide range in relation to this player and the most common ones are VCD, DVD, AVI, MKV, Ogg and OGM. When it comes to the popularity then it is worth mentioning that the player has a strong user following and for the same reason the independent download websites allow the users not only to download the player but also to rate it to make sure that the new users can read the reviews before they download the player. The original author of the player is the Kang Yong Huee and it has been developed by the Pandora TV. When it comes to the developing languages then it is astonishing to see that the major language selection has been made in this regard to make sure that the users get the full functionality and for the same reason C++, Delphi and Net wide have been used to make this player as one of the awesome media players of all times. The player was developed in the year 2002 and the stable release of this awesome software came in the year 2015 when in February the company announced that the KM player is now up and has been cleared of any bugs that users formerly faced. The official website is http://www.kmplayer.com and it is supported by all major languages of the world.

What is VLC Player

Well VLC media player definitely needs no introduction and for the same reason it is known to people all over the world that this awesome player has left a mark on the market soon after its release 14 years back in 2001. Written in C, C++ and Objective C the player has been developed by VideoLAN and the related platforms that it supports are IA-32, x64, ARM and PowerPC. It has a sound user base all over the world and for the same reason it is also regarded as one of the most authentic pieces of technology of all times. Very few people know that the idea of VLC originated in 1996 and the main purpose initially was to make sure that the videos are streamed throughout the university campuses all over the world through a satellite link which has been dedicated for educational purposes but just like Facebook the popularity of the software increased over the period of time and hence it is not used now for the educational purpose only instead the developers are now trying to make sure that in future the IMAX theatres technology is also embedded within the player to make sure that the best is provided to the clients free of charge. The player holds the license of GNU GPL v2+ and GNU LGPLv2.1+ which makes it one of the most authenticated players in the world. It supports almost every video format of the world effectively.

The three most common reviews of the KM Player has been taken from Softpedia, Tech Support Talert and the user review that has been viewed most of the time on Softnic. The respective URLs are as follows:

The potent features include the format support, awesome customer services and brilliant response time. When it comes to the cons of the software then it is to be noted that the only issue users have with this player is that they are not able to get through the advanced features as they have been made too complex. Following is the screenshot of the review:

The user is of the view that the latest version of the KM media player does not have Ac3/DTS Audio codecs which has definitely created a nuisance. Rest all is OK and the player has been ranked high. It is also to be noted that the reviews has been viewed by the customers most of the times: 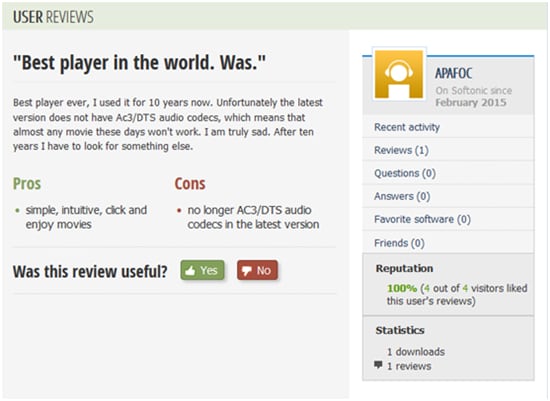 Reviews the player as one of the best alternatives of any player that exists in the market as it is not only light but the installation is also very simple and the codec bundles allow the user to make sure that each and every video in any format is played without any issue and problem. The website also recommends the KM player to those who are looking for a freebie and yet a powerful player that does the work for them.

The website is of the review that the VLC media player is the most powerful and feature packed player that a user can get any time free of charge from the website. It is the ultimate media player as per them and the user at first might find it difficult to use the features but at the same time they are also of the view that with the passage of time the user will get to know the features:

Has declared the player as one of those players which should be priced as the features it provide are state of the art and awesome. The interface is awesome and allows the users to get the best and use the controls easily. The list also includes A/V filters and effects, media library and playlists. The download link has also been provided by the website. 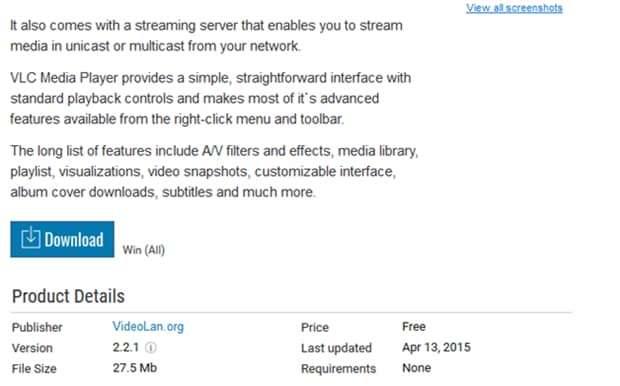 Calls VLC media player as one the most robust software programs of all times the user of which depend upon the fact that the user should try to improve the usage with the passage of time, it seems that the website is of the view that it is only the user behavior that would come up with the best software piece in the future as the developments solely rely on it. 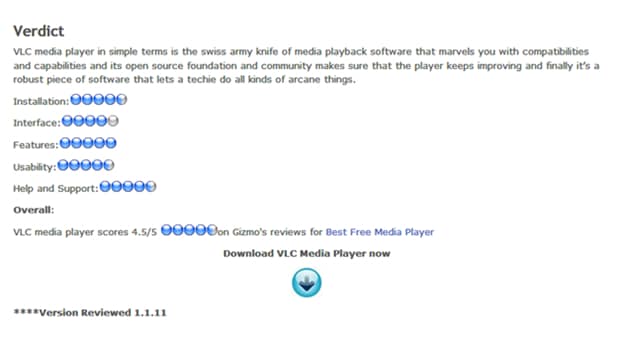