When compared to ProRes, MP4 has a better compression ratio that saves a decent amount of space on your storage media. ProRes files are quite larger in size, and as far as the picture quality is concerned, the difference between the two is almost negligible. Considering this, the obvious question is, “Why do professionals convert MP4 to ProRes?” Although the answer is a bit technical, things are easy to understand even if you don’t have an in-depth understanding of video formats and how your GPU processes the data. Here you will learn about the critical differences between ProRes and MP4 files, why most professionals convert MP4 to ProRes, and what tools do (or can) they to get this done.

Part 1. What Are the Differences Between ProRes and MP4

Developed and introduced by Apple Inc. in the year 2007 with the public release of Final Cut Studio 2, ProRes is a codec that, unlike and that use MP4 as file extension, loosely compresses the footages, thus preparing them for post-production processes.

MP4 files are GOP (Group of Pictures) and are smaller in size as they are compressed using or codecs. Because of this, the GPU has to make additional efforts to de-compress and compute the data they store before displaying a video on your screen during the playback. The condition stands true even during the editing process. Since the post-production tools like Adobe Premiere Pro, Final Cut Pro, etc. engage the GPU to de-compress an MP4 file, you cannot take full advantage of the hardware.

Furthermore, and are 8-bit codecs, and therefore you get limited shades when it comes to color grading while working with MP4 files.

On the other hand, ProRes is an I-frame (individual frame) files where each video frame is compressed individually. Although this significantly increases the size, it makes it extremely simple for the GPU to process and display the frames on the screen during playback. Also, due to this exact reason, the editing tools don’t have to engage the GPU unnecessarily while making modifications to the clips during the post-production processes.

In addition to this, unlike MP4, ProRes is a 10-bit codec, which means that you get more room to work with color grading as compared to and .

Assuming that you have now clearly understood why professionals prefer ProRes over MP4, the remaining two parts that follow from this point onward discuss the most recommended tools and methods to convert MP4 to ProRes.

Part 2. How to Convert MP4 to ProRes in Most Recommended Way

A widely appreciated tool by both Windows and Mac users across the globe is Wondershare UniConverter (originally Wondershare Video Converter Ultimate). UniConverter is a universal converter that supports more than 1,000 extensions and can recognize and convert almost all significant formats to their relevant ones. The program is also lightweight and can perform all the conversion tasks around 30x faster than other post-production applications.

Security Verified, 8,301,864 people have downloaded it

You can learn how to use Wondershare UniConverter to convert MP4 to ProRes by following the simple steps:

Note: At the time of this writing, only the Mac version of Wondershare UniConverter can transcode MP4 to ProRes.

Launch Wondershare UniConverter on your Mac computer running the latest version of macOS (macOS Catalina at the time of this writing), check from the top of the interface and ensure that you are on the Converter tile, click Add Files from the center of the window, select the MP4 video you want to transcode, and click Load. 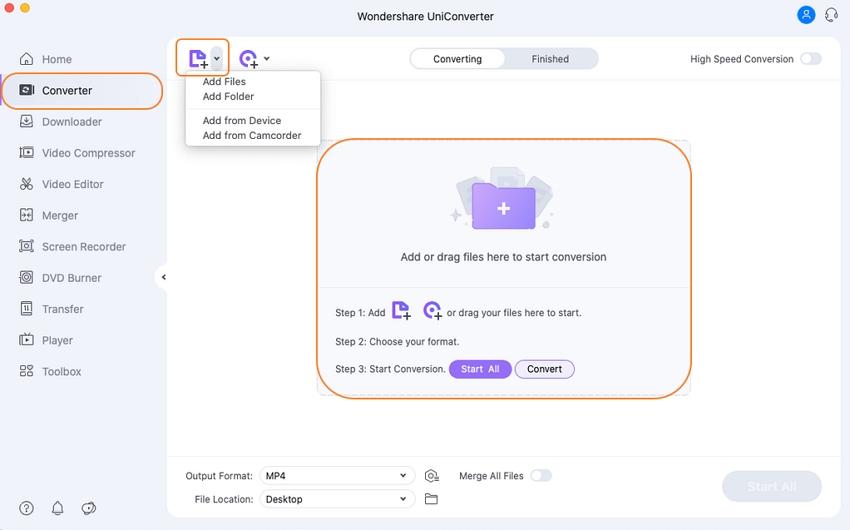 Click Output Format from the bottom section, go to the Editing tab from the top, and select ProRes from the list of formats in the left. As for the resolution, choose your preferred one from the right (Same as the source is selected here for illustration). 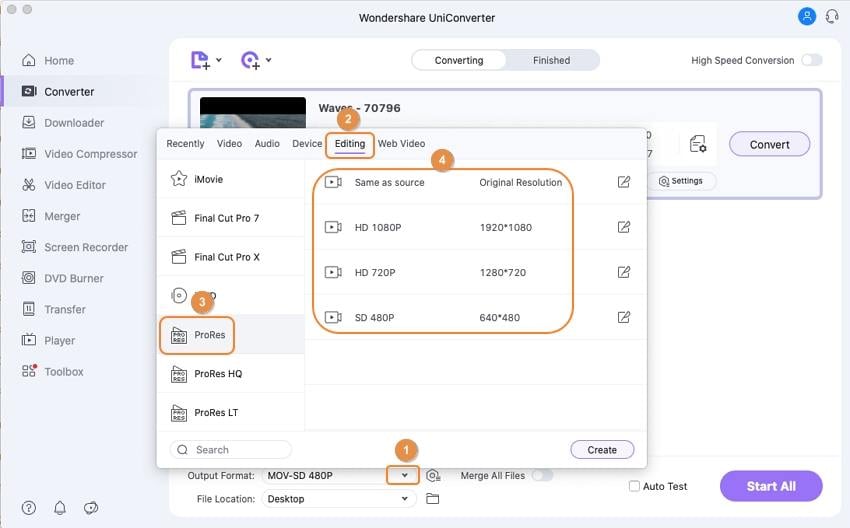 Choose a folder to save the transcoded file from the Output field at the bottom, and click Convert to begin transcoding MP4 to ProRes at 30x faster conversion speed with Wondershare UniConverter. 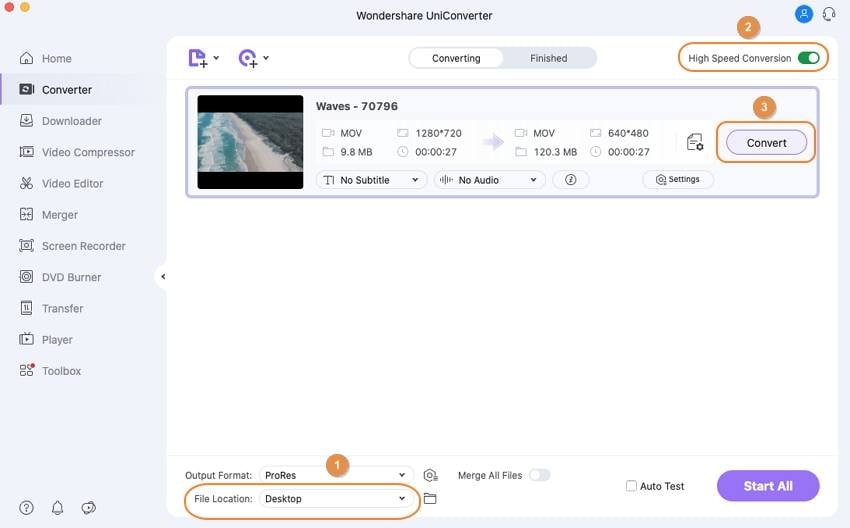 Part 3. Other 4 Converters Recommended to Convert MP4 to ProRes

A couple of other tools recommended to transcode MP4 to ProRes in the absence of Wondershare UniConverter are listed below:

One of the most appreciated post-production tools by Apple, Final Cut Pro X, can easily convert MP4 to ProRes without using any other third-party program. Since Apple Inc. develops both ProRes and FCPX, they are fully compatible with each other, without giving much overhead to the GPU.

Adobe Premiere Pro is yet another post-production tool used by most professionals who work as full-time editors to produce industry-standard outputs distributed for commercial gains. After Adobe collaborates with Apple, Premiere Pro can recognize and transcode MP4 to ProRes from its Export Settings box. 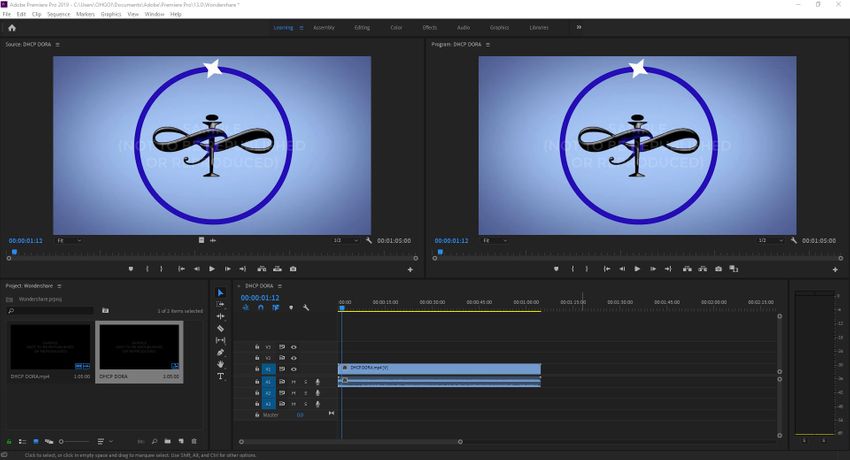 iMovie is also a product of Apple Inc. and is available for both iOS and macOS devices. The application can be downloaded from the App Store and is free to use. With FCPX and Adobe Premiere Pro, iMovie has a box called Movie Settings that lets you easily transcode MP4 to ProRes.

Developed by VideoSolo, Free Video Converter can be installed on Windows and Mac computers, and both the variants are capable of converting MP4 to ProRes. Since the program's interface is simple, even a novice user can perform the transcoding tasks without any additional help or being highly technical. 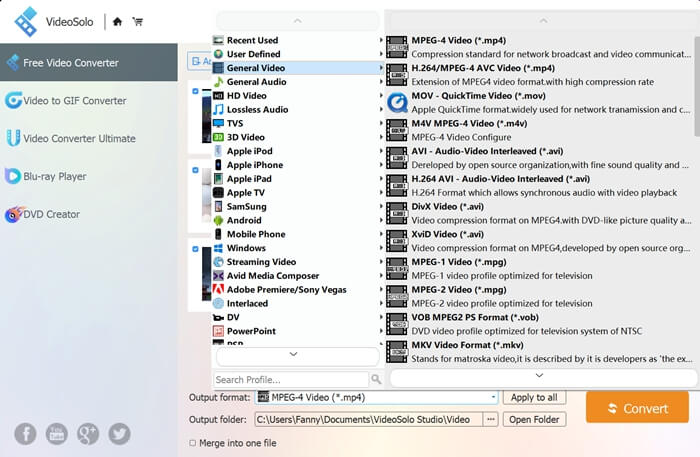 Although you can use MP4 files in the post-production applications to edit them for commercial distribution, unlike ProRes, MP4 may lag during the process, especially if your PC specifications are not competent. That is where a third-party tool like Wondershare UniConverter comes into the picture that, because of being lightweight, can transcode MP4 to ProRes around 30x faster than other conversion applications.