Xvid Converter: How to Convert Xvid to MP4 Easily

“Hey, I'm looking for a video converter that will convert Xvid format videos to MP4 format, so I can watch them on my iPod.”

Smaller file size that is capable of maintaining the video quality is the primary reason that makes Xvid as the most preferred choice for sharing videos over the Internet. If you have downloaded such Xvid files from the Internet, playing them on Apple and other devices can be a problem, as the format is not supported. Thus, to play your Xvid files on different portable devices, the best solution is to convert Xvid to MP4. MP4 is considered to the best alternative as this container format contains video, audio, still images as well as subtitles in a single file. Above all, MP4 is a universal format that is compatible of playing on almost all players and portable devices.

Part 1. Why need to convert Xvid to MP4 on Windows.

In technical terms, Xvid is a video codec library that follows the MPEG-4 video coding standards. A Xvid is not a video format but a program that allows compressing and decompressing the videos to MPEG-4 ASP. A compressed Xvid file can retain the quality of DVD without occupying much space on your disk. Moreover, file transfer speed using Xvid is really fast. In spite of these benefits, there are various situations when you need to convert Xvid to MP4 and some of the major ones are listed below:

1. Xvid is not compatible with Apple device.

If you are an Apple devices lover, then Xvid will surely disappoint you as the format is not supported by iPhone, iPad, and iPod. So, if you have downloaded Xvid files from the internet or got them from other sources and you wish to play them on your Apple devices, converting Xvid files to MP4 (supported by Apple devices) is the most feasible solution.

2. Xvid is not supported by many portable devices.

Besides Apple devices, Xvid is also not supported by other portable devices and video players. So if you wish to play your Xvid content on these portable players you need to convert them to a compatible format like MP4.

3. Xvid does not facilitate easy editing and other functions.

Since Xvid is not so commonly used format, there are chances that it is not supported by video editing and other tools. So if you wish to edit or perform other functions on your Xvid file, you need to convert it to a more popular and compatible format like MP4.

Part 2. How to convert Xvid to MP4 on Windows.

Professional video converters are the best solutions for converting Xvid to MP4/MOV or other formats. One such converter that allows seamless conversion at really fast speed is Wondershare UniConverter (originally Wondershare Video Converter Ultimate). This top-rated program allows converting video and audio to more than 1000 formats without any quality loss. You can also make editing and compress video size to the Xvid files before conversion. The super fast converting speed and high-quality output format will help you convert Xvid codec files easily and quickly.

You should first free download and install Wondershare UniConverter on your PC/Mac. The steps below are based on Windows version, which also work similar on Mac. As Xvid is a video codec, AVI files coded by Xvid will be used as examples.

Open Wondershare UniConverter on your PC/Mac. On the main software interface, click the

Once the Xvid files are loaded successfully to the software interface, click the Output Format: option and choose Video > MP4 from the drop-down menu on the right side of the interface. If you want to convert Xvid files to MOV, just choose MOV from the video tab. 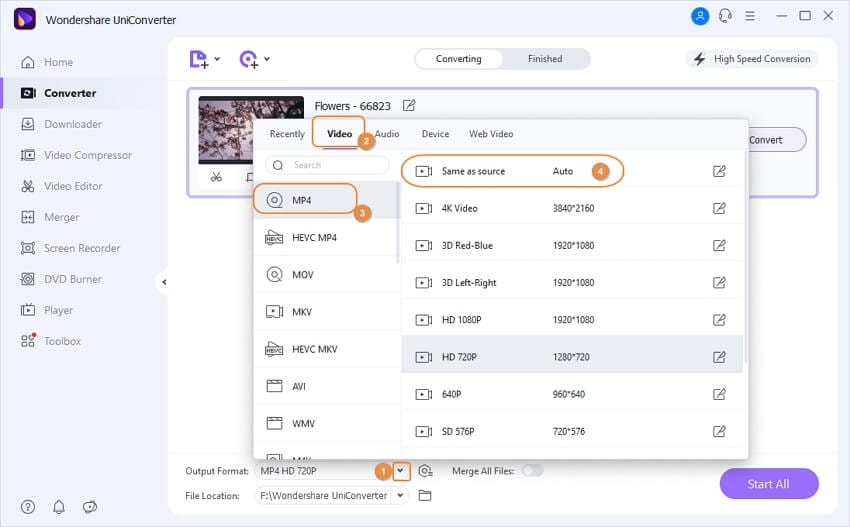 Finally, click on the Start All button to start the Xvid to MP4 conversion process. You can find the converted files in the Finished category or the Output icon at the bottom of the main interface. 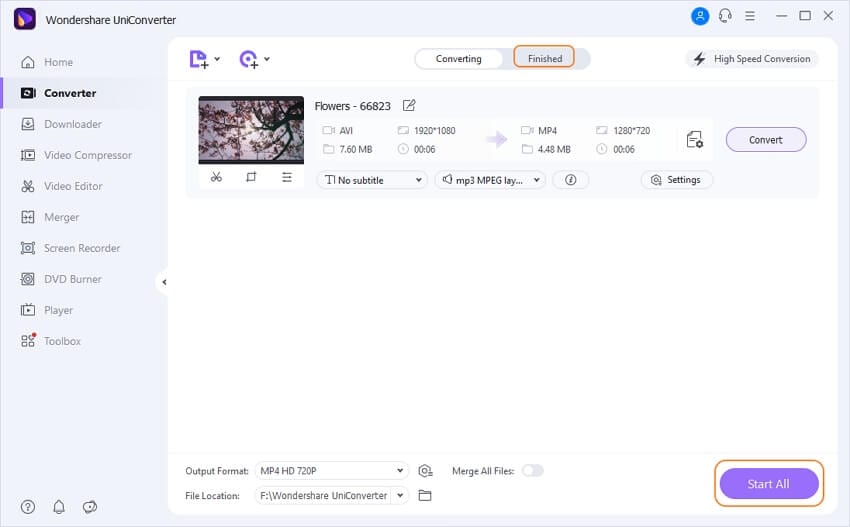 Part 3. How to convert Xvid to MP4 online.

Desktop software is definitely good options for converting files, but the majority of these tools are paid. So if you are in search for a feasible and free solution to convert Xvid to MP4, online Xvid converters are there to help you. There are a decent list of these converters available online which allows to convert Xvid to MP4, in addition to other file formats. The converter is free to use and supports converting an array of file types including documents, PDF files, video, audio, and others. The program supports adding files from multiple sources including local PC, URL, Dropbox, and Google Drive. Converted files can also be saved directly to Google Drive, and Dropbox. 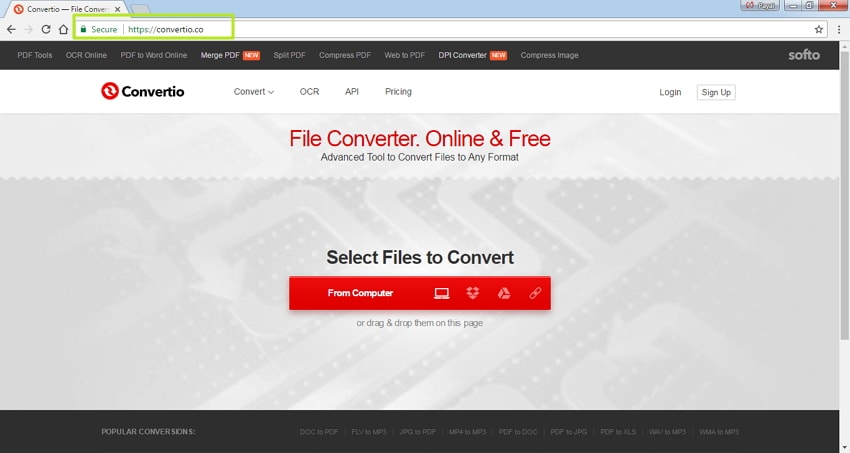 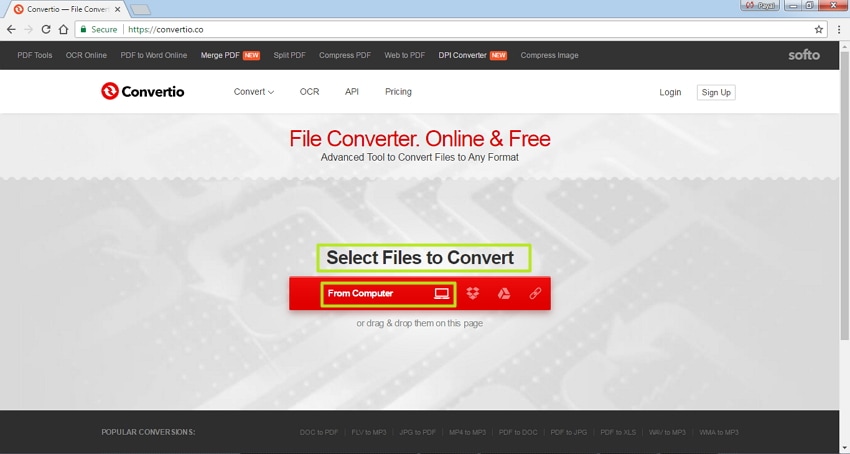 Step 3: Once the Xvid file is added, select MP4 as the output file, and click Convert. 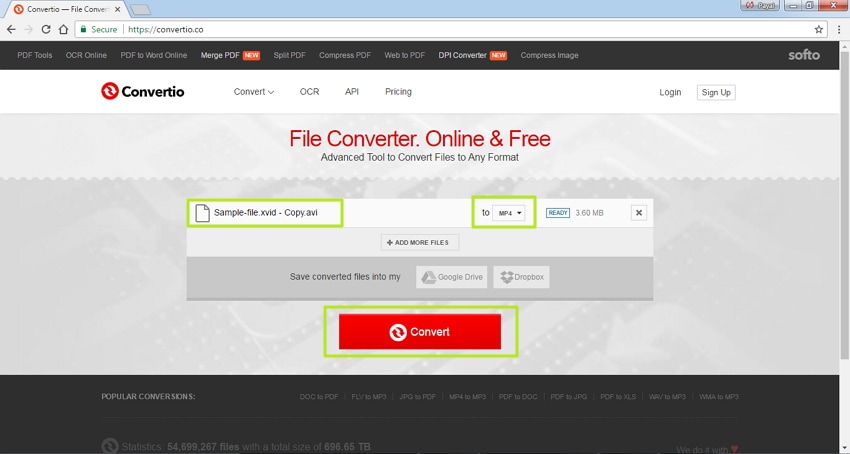 Step 4: After the successful conversion, the file can be downloaded from the converter interface. 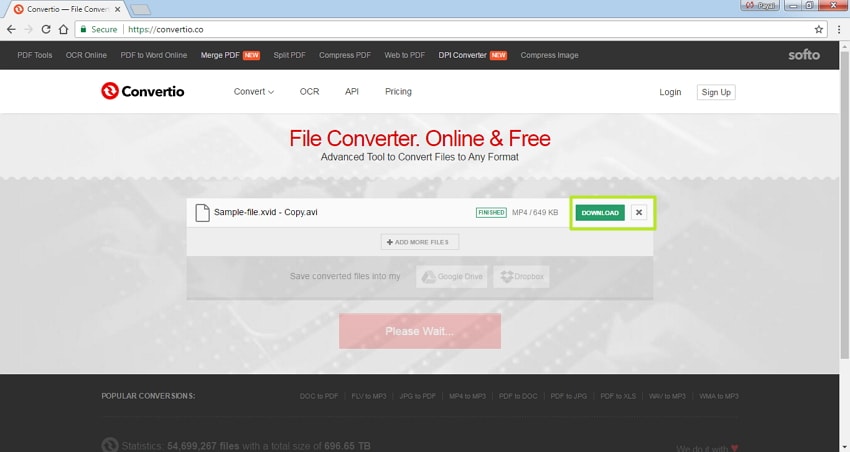 Part 4. The comparison between different Xvid to MP4 converters.

Above listed are two ways for converting Xvid to MP4- Wondershare UniConverter, and online converter (Convertio). Both of the listed converters have their associated pros and cons, and depending upon your requirements, you can make a choice among the two. Below given is a comparison table between the two converters so that you can make the best decision.

Now, you have learned the tools that are perfect to used to convert Xvid to MP4 on Windows! If there is anyone in your family or your friends who want to convert this file, inform them about the good news. To sum up, Wondershare UniConverter is the best desktop software that allows good quality conversion at super fast speed. With support to more than 1000 popular formats, it takes care of all your conversion and other related needs.