How to Play A DVD on Xbox One/360 Effortlessly

Can I play a DVD through a gaming console like the Xbox or others? ---As asked on Quora

With present-day gadgets serving multi-utility, you no more need to stock different types of equipment for different needs. Gone are the days when you would need a separate DVD player to enjoy your favorite videos as present-day PCs, Chromecast as well as gaming consoles can solve the purpose. So if you are a gaming enthusiast and have got Xbox One or 360, you can use it as an Xbox 360 HD DVD player as well. Moreover, in the absence of an Xbox media remote, the regular gamepad of the device can be used to control the video playback. The following part discusses in detail on how to play DVD on Xbox One and other models.

Does Xbox one play DVDs? So now when you know that it does, the next step is to know how-tos. In order to play DVD and Blu-ray disc using your Xbox devices, you need to install a separate Blu-ray player app. You can install the app on the Xbox home or by inserting the disc. If you insert the disc into the gaming console ensure that the disc art is upward facing in relation to the device.

Steps on how to play a DVD on Xbox one by installing a Blu-ray player app:

Step 1: Take the desired DVD disc that you want to play and insert it into the gaming console. The Microsoft Store will automatically start downloading the relevant app. You can also click the tile that looks like the disc icon on the dashboard.

Step 2: Microsoft Store will open with the Blu-ray player app. Click Install to proceed with the process.

Step 3: After the app is successfully launched, return to the main dashboard and then launch your video.

Step 4: To open the guide, click the Xbox button on the controller. Click Home to move to the home.

The Blu-ray player app can be opened from the list of recent apps in the guide; Alternatively, you can also click the disc icon to launch the DVD. 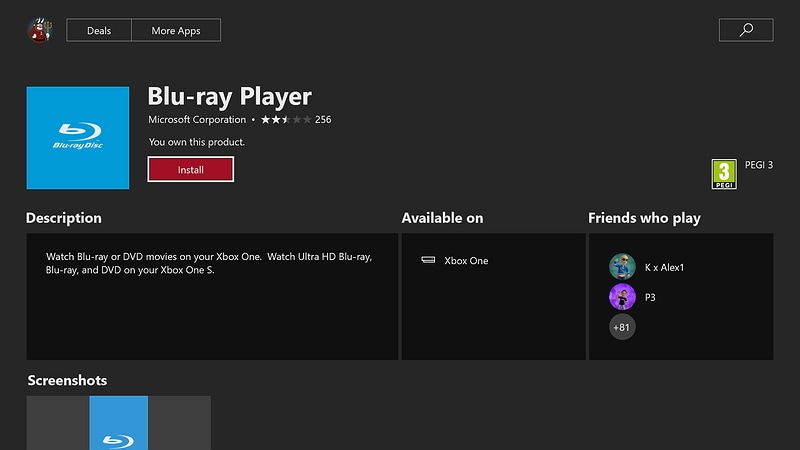 Limitations of this method:

The installation of the Blu-ray player app converts your gaming console into an Xbox DVD player, but this method comes with its share of limitations. Each unit of the Xbox One gaming console is manufactured for a specific DVD and Blu-ray region that follows international standards. Thus the consoles are capable of playing only the discs which are sold in the same region as Xbox devices. In case if the discs are designed for all regions, or are not region encoded they can be played on the consoles. To know more about the supported region and related details, visit https://support.Xbox.com/en-CA/Xbox-one/apps/watch-bluray-DVD-movies. So now if we answer the query- can Xbox one play DVDs with this limitation in mind, the answer will be- Yes, but with restriction to supported regions and disc formats.

Part 2. Best Solution to Play DVDs on Xbox One/360 without Any Limitations

If you want to avoid any limitations with respect to supported discs, and regions while playing your DVDs on Xbox One 360 model, the best solution is to convert DVD to Xbox supported formats. There are a number of converter programs available and the top 1 in the list is Wondershare UniConverter (originally Wondershare Video Converter Ultimate). It's easy to use and supports more than 1000 formats including MP4, MOV, MKV, FLV, AIFF, M4A, and others. Additionally, you can also select device-specific formats including Xbox, PS3, PS4, iPhone, iPad, and others to rule out any compatibility issues. Wondershare UniConverter works on both Windows and Mac systems.

Download, install, and launch Wondershare UniConverter on your PC/Mac, then insert the desired DVD into your PC before proceeding with the following steps.

Step 1 Load DVD for converting to Xbox One/360.

Open Wondershare UniConverter on your PC/Mac, select the Converter tab from the primary interface. Then open the drop-down menu next to the

option. From the given options, select the desired one.

A pop-up window will open to ask if you want to load only Main Movie or All Movies. Select the desired option and click OK.

Step 2 Select Xbox One/360 as an output format.

Once DVD disc files are loaded into the program interface, click the inverted triangle at the Output Format: option at the top-right corner. Next, choose Device > Games> Xbox One or Xbox 360 from the output format list. 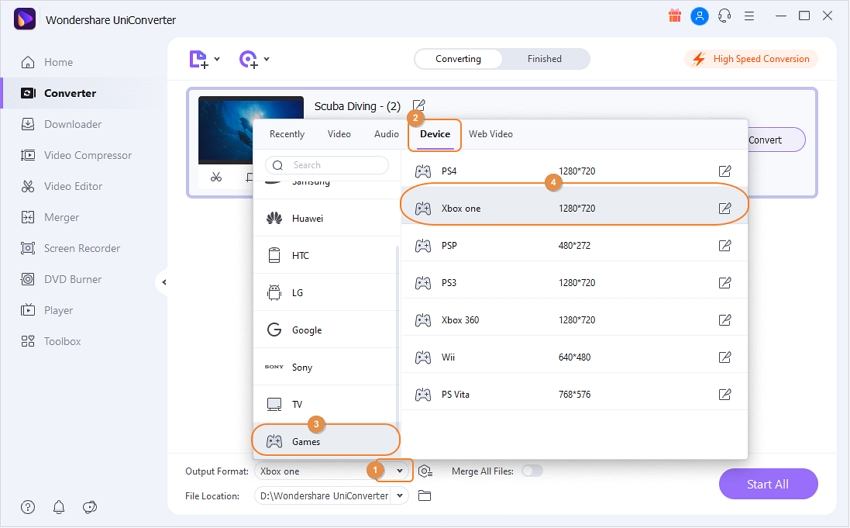 At the Output option, select the location on your PC where you want to save the converted files. As the final step, click the Start All button to start converting DVD to Xbox supported formats easily and quickly.

The converted files can be found from the Finished tab, and you can click on the Toolbox > Transfer button to transfer the converted videos to Xbox via a USB cable. After a while, you can play your DVD movies on Xbox devices smoothly. 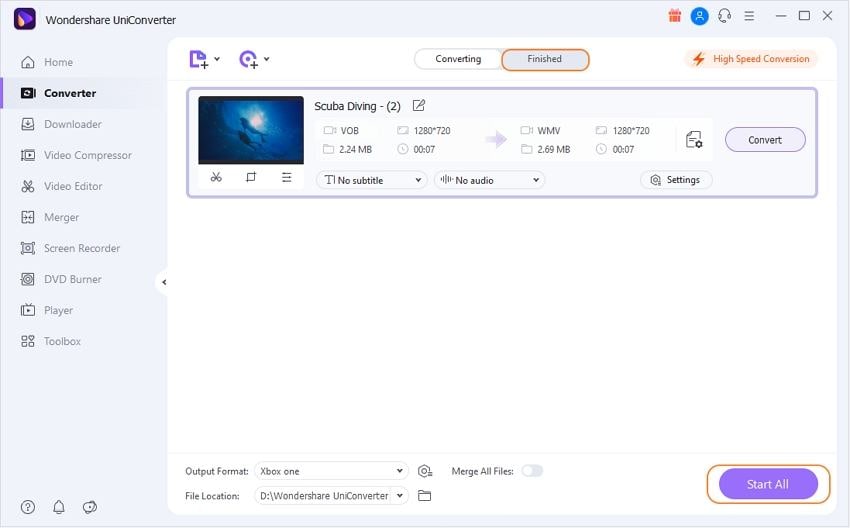 Following the above steps will help you to convert all types of DVDs to Xbox format so that you can watch DVD on Xbox without any compatibility, region or disc issues. So when the query is - does Xbox 360 play DVDs, with respect to Wondershare, the answer is “Yes” and without any limitations.

There are a number of Xbox gaming console models available. The bundled packages are also there for purchase which along with gaming console, and controllers also have game download and other offers. To make your selection process a little easier, we have picked up some of the top selling models of the year. 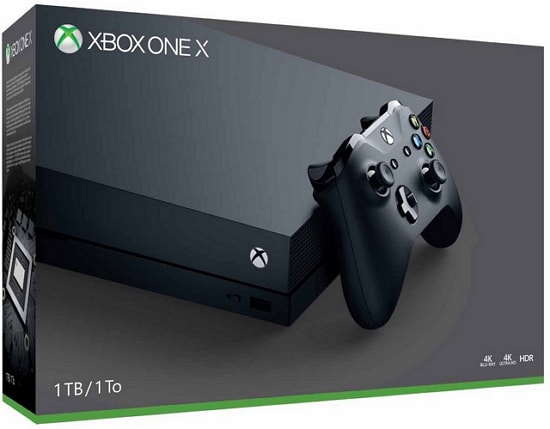 • 40% more power than other consoles. Enjoy playing on one of the most powerful devices.

• Features 6 graphical processing power that along with a 4K Blu-ray player enhance the gaming experience.

• Allows playing with the greatest community of players.

• This latest model is compatible with all devices, controllers, and games.

• Allows watching every frame with 326GB/sec of memory bandwidth. 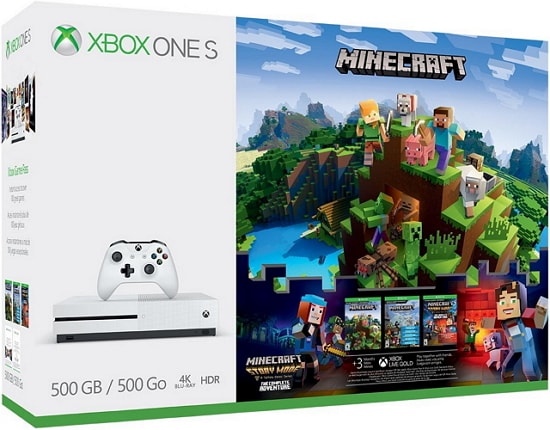 • The gaming console allows you to play the Minecraft across all Windows 10, consoles, and mobile.

• Comes with 3 months of Xbox Live Gold where you can play games with your friends online and also get access to free games and other offers.

• To enhance the audio experience it comes with Premium Dolby Atmos and DTS:X Audio. 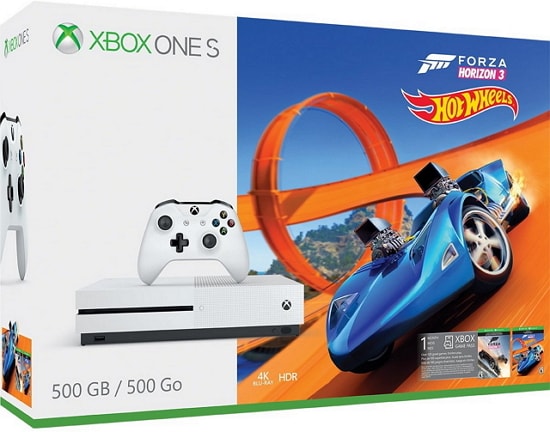 • Allows connecting, competing, and sharing platforms with gamers on Windows 10 and Xbox One.

• Spatial Audio for an enhanced experience.

• High Dynamic Range of the console offers a crisp and bright video. 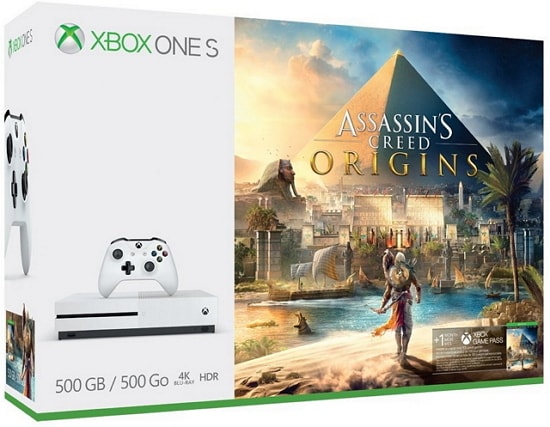 • The pack offers access to more than 100 great games along with 1 month of Xbox Game Pass.

• Enjoy uncovering the pyramid mysteries, and lost tombs with exciting features of the game. 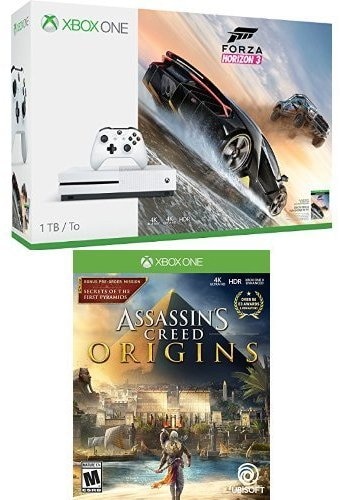 • This bundle pack comes with 1TB Xbox One s console, Xbox wireless controller, HDMI 4K capable cable, the complete downloaded game of Forza Horizon 3 for both the Windows 10PC, and Xbox One, and Assassin’s Creed Origins.

• Allows you to watch 4K Blu-ray movies and also stream 4K content on Hulu and Netflix.

• The HDR technology enables you to enjoy richer and more luminous colors of the game. 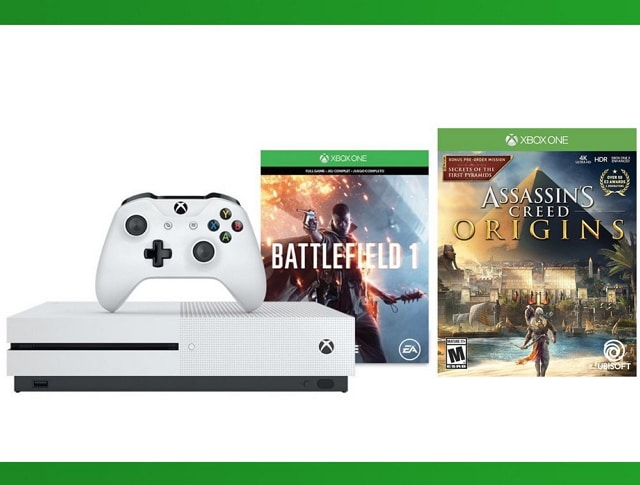 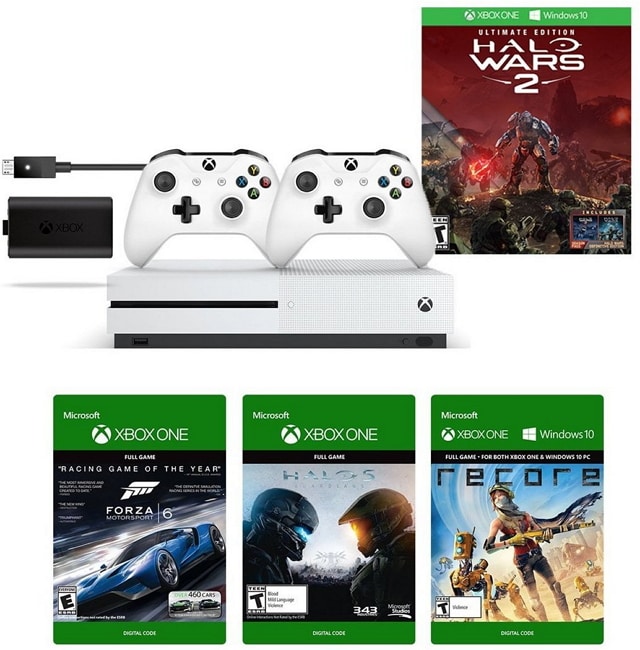 • The precision controller with the bundle is compatible with Windows 10, Xbox One, and Xbox One S.

• Controller features Bluetooth for gaming on tablets and Windows 10 PC.

• The play and charge kit is compatible with the original Xbox One Wireless controller and new white Xbox wireless. Gets fully charged in less than 4 hours. 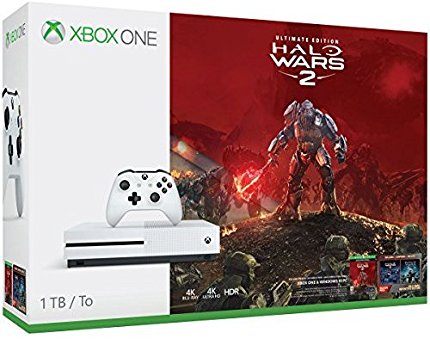 • With the game of Halo Wars 2, you can enjoy building and leading armies of vehicles as well as troops in the epic battle 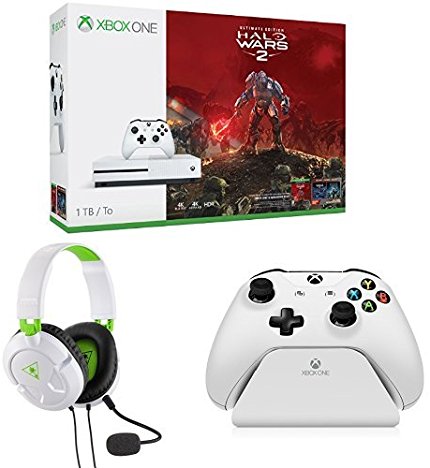 • The gaming headset of the bundle is comfortable and lightweight. The device features crystal clear chat with high-quality 40mm speakers.

• The headset works perfectly with the new Xbox One controller, PS, Mac, tablets, and other devices.

• The Controller Stand v2.0 is facilitated by converting the 2 handed controllers into 1 handed remote.

How to watch a DVD on Xbox One or how to fix Xbox One not reading disc? You know the methods now. The Blu-ray player app will come with restrictions to the region while Wondershare UniConverter offers a complete solution without any limitations and with the best quality output.