All Ways to Convert MP4 to MPEG/MPEG-1/MPEG-2

A lot of people have questions about MP4 and MPEG format. MP4 and MPEG are different video formats. MPEG is short for Moving Pictures Experts Group and refers to the family of digital video compression standards and file formats created by the ISO Group. It now generally represents MPEG-1 and MPEG-2 formats. MP4 uses MPEG-4 compression, which is also a standard developed by the Moving Pictures Experts Group. As is known, MP4 is the most popular video format in the world. However, there're occasions when you want to burn videos to DVDs, and the DVD burner only supports burning MPEG-2 videos. This article will show you how to convert MP4 to MPEG, MPEG-1, or MPEG-2 for your different purposes.

Watch Videos to Learn How to Convert Any video to MP4?

As a powerful desktop application, Wondershare UniConverter (originally Wondershare Video Converter Ultimate) has succeeded in helping numerous customers with their video conversion needs. Playing with a number of formats has become easy as Wondershare UniConverter comes with processing files from 1000+ formats and delivering the output as per your requirements. With this best MP4 to MPEG converter, watching, sharing, and enjoying videos on any device has been made feasible as you can now opt for different formats while converting their videos.

Converting MP4 into any of the given MPEG formats requires you to download and install Wondershare UniConverter on your computer first. The steps below are based on the Windows version, but also work on Mac.

Step 1 Launch and Add Files to MP4 to MPEG Converter

After downloading the software, install and open it on your PC/Mac. Then, select the MP4 files you want to convert by clicking on the Add Files button or dragging and dropping the file into the program window. 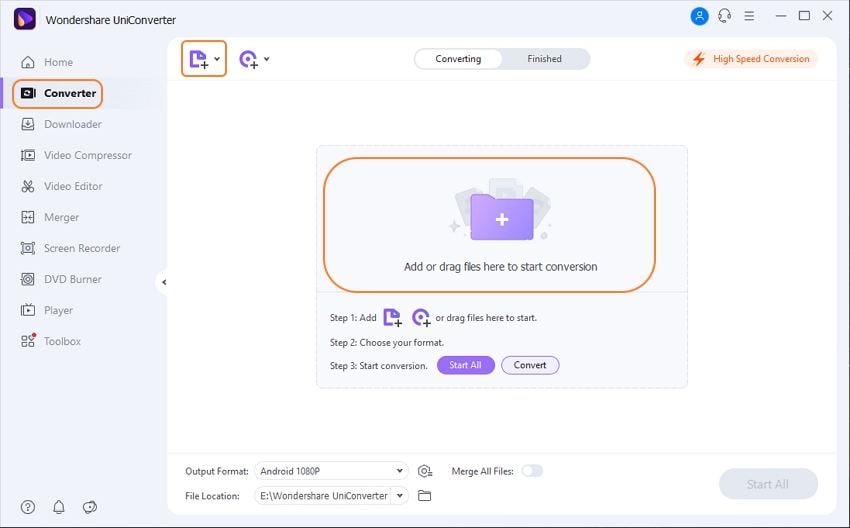 Once you have added the MP4 file into the program window, you can edit the video before converting it. You only need to click one of the editing buttons under the video thumbnail to enter the Editing window. This is an easy-to-use tool and comes with multiple options to enhance your video, like trimming, rotating, adding subtitles, etc.

Whether you edit the MP4 video or not, you can select the target conversion format from the drop-down menu of Output Format, and choose the MPEG format and resolution from the Video tab. Various video formats are provided here, including special formats for devices. 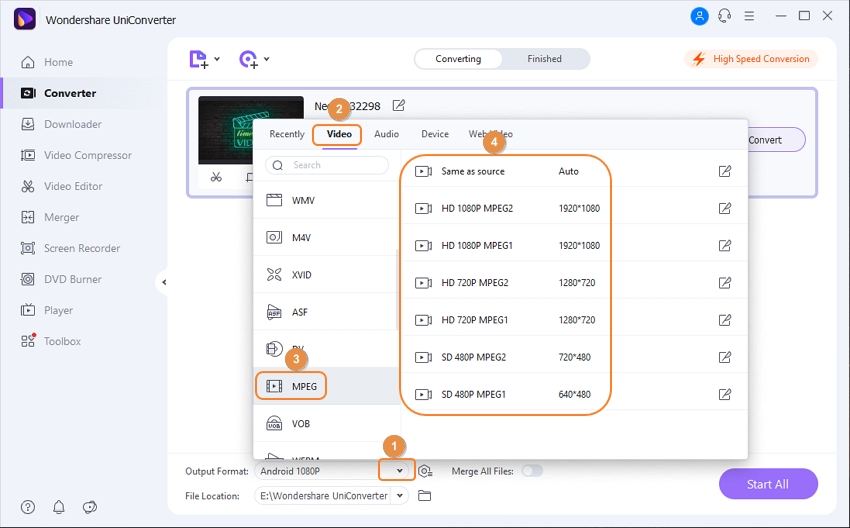 Finally, click on the Start All button to start the MP4 to MPEG conversion. The process will be finished in a while, and you can find the converted videos from the Finished tab.

Video Tutorial: How to Use the MP4 to MPEG/MPEG-1/MPEG-2 Video Converter for Windows, Similar on Mac

If the converted MPEG files are too large and want to reduce the video size, please learn more details at How to Compress MPEG Videos Easily>>

Wondershare Free Video Converter allows you to convert videos into any format at a good speed. It offers the facility to convert MP4 to MPEG/MPEG-1/MPEG-2 free on Mac/Windows. It supports the most common video formats like MOV, MKV, MPEG, AVI, and others for free conversion. As the free version of Wondershare UniConverter, you can follow similar steps to convert MP4 to MPEG or follow the simple steps listed below.

Step 1: Once you are done with the downloading and installation process, run Wondershare Free Video Converter on your computer. You can upload the desired videos by clicking on the Add Files button. It also allows you to drag MP4 videos to the program simply. 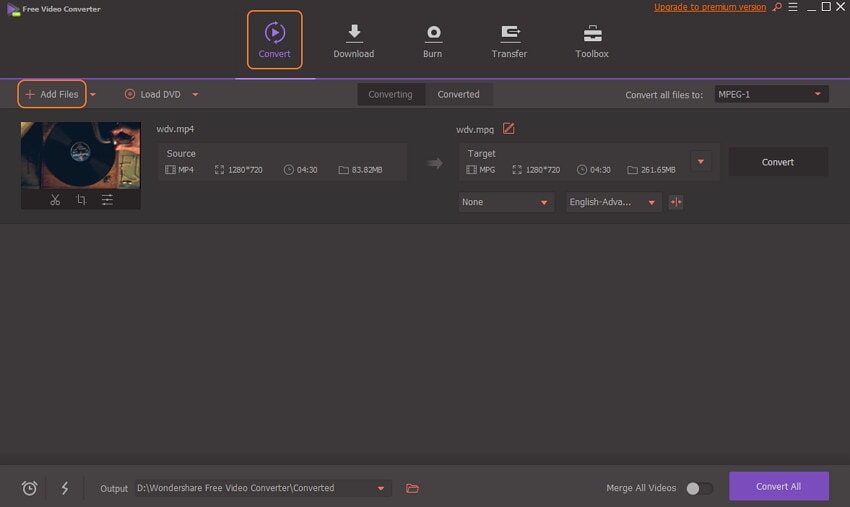 Step 2: Once you have uploaded the video to the program, choose the output video format from the Convert all files to option, open the drop-down list and choose Video > MPEG from the given options; video resolution should be selected here. 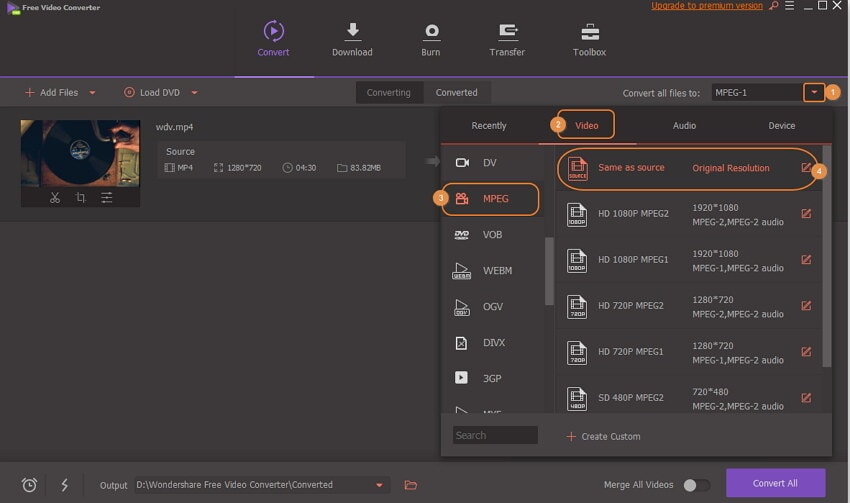 Step 3: You can now click on the Convert All button to convert MP4 to MPEG. The process will be finished soon. 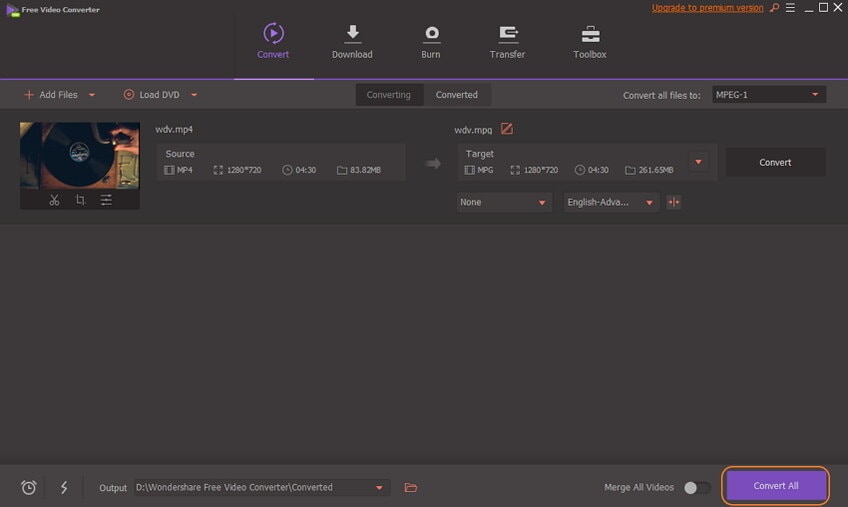 Convertio is an online conversion site that supports some video format conversion, including MP4, MPEG, MOV, WMV, etc. You're allowed to add videos from the local computer, phones, and some general devices. The converting speed is up to your network connection, like most online sites. It can be free to use, but you can find ads on its website. However, it can be an option if you want to find an online free solution.

Step 1: Launch the Convertio site from your Windows/Mac browser, and you'll come to the default interface.

Step 2: Click on the Red button it shows you to add an MP4 file you want to convert. After that, select MPEG as your output format from its drop-down list.

Step 3: You can also change the output size as you need, and then click on the Convert button to start online MP4 to MPEG conversion. 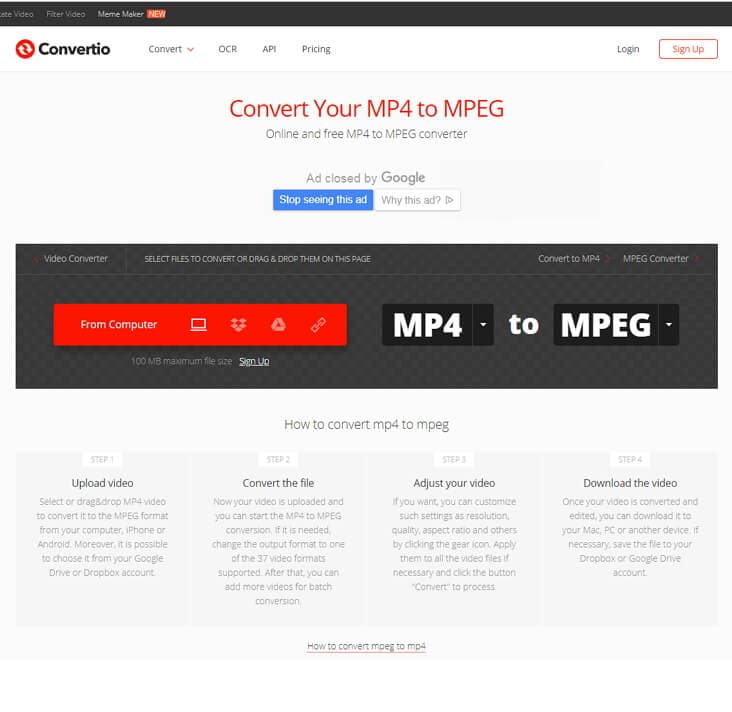 It is another online MP4 to MPEG online conversion site we want to recommend here. You can convert the local file to the format you need. You can also find the popular video formats here like MP4, MOV, MKV, WMV. It looks old and hard to find the button you need.

Step 1: Open the site from your browser, and you'll see a green area that says Convert MP4 to MPEG.

Step 2: Hit the Browse button to open the file on your computer. And select MPEG from its Output format list.

Step 3: The last step is to tap on the Convert button to start converting MP4 files to MPEG format online. 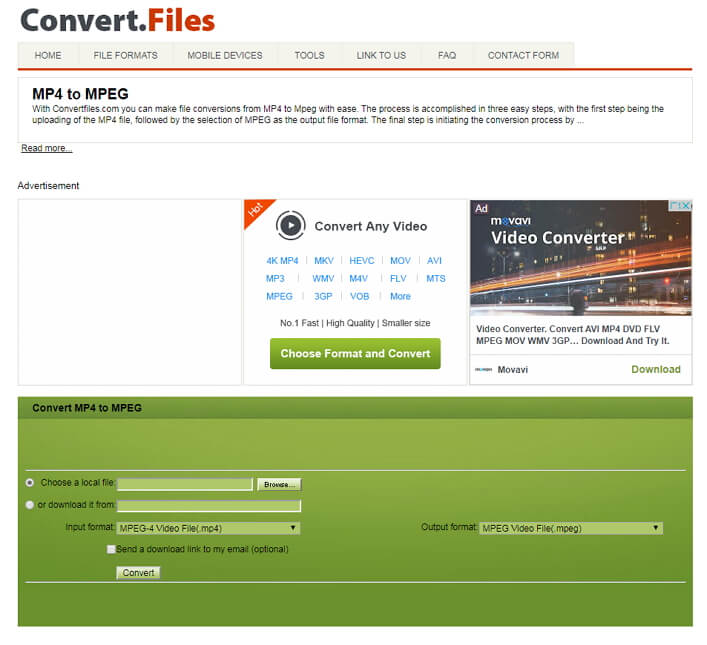 If you want to know more information about MPEG and MP4, please move to MPEG vs. MP4 - The Quest for the Best Video Format >> to learn more details.