MP4 to OGV Converter: How to Convert an MP4 File to OGV?

Often, there is a need to convert an MP4 video file to an OGV file. Most people often confuse OGG and OGV. However, it is important to note that OGV is a video file format which has been developed by Xiph.org. The lossy and free video compression format is mainly linked with OGG Vorbis, the latter being a standardized and open bitstream container format which is designed for the purposes for streaming and manipulation.

Part 1. Best MP4 to OGV Converter for Windows and MAC

Steps on How to Convert Videos from MP4 to OGV or OGV to MP4:

Wondershare UniConverter (originally Wondershare Video Converter Ultimate) supports converting videos between 1000 formats on Windows or Mac computer. You can convert MP4 to OGV and vice versa. Below we make the example of converting MP4 to OGV on Windows, you can follow the same

Step 1 Load the MP4 files from your System to Wondershare OGV Converter.

The first step requires you to download and install the MP4 to OGV video converter. Once the download is completed, you’ll be guided through the installation process. After finishing the installation, you can run the program, and add the required MP4 files to it. Save yourself the trouble of uploading a video separately and simply drag the video from the specific file or folder. If you don’t want to drag, you can use the Add Files button. 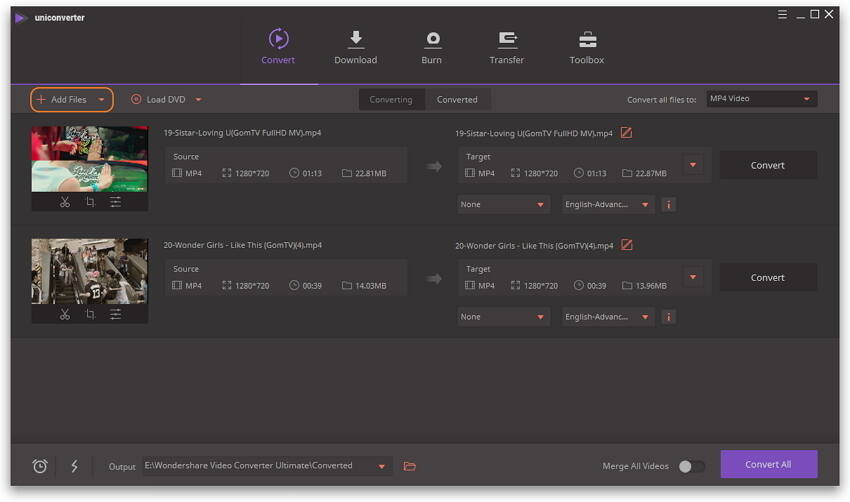 Step 2 Set the output format to OGV for the MP4 to OGV conversion.

It is important to choose the right format while doing conversions. Simply click the inverted triangle beside Convert all files to: to enter the format panel. Choose OGV and the resolution from the Video category as the output format. Also, if you are looking for some other formats, you’ll find all of them listed along with the desired format. Your choice must depend upon the purpose that requires to be served with the converted file. 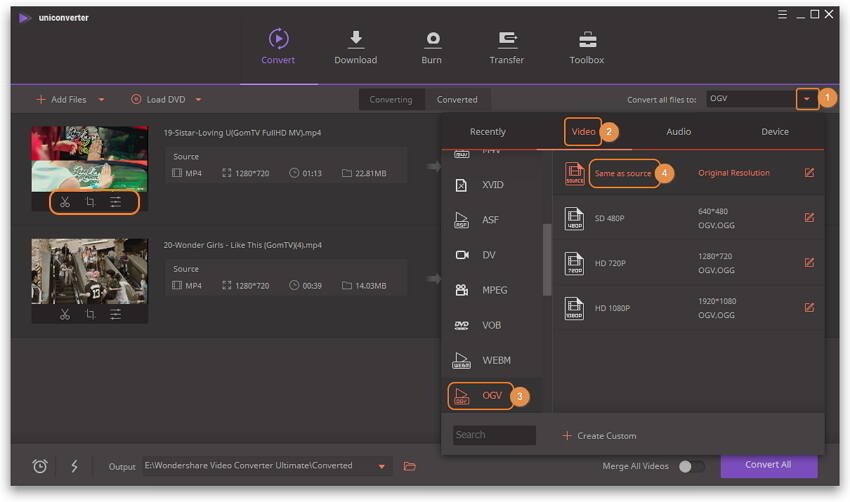 This is an optional step, but does appeal to editors and professionals. Before converting the entire video, you can edit the video by choosing one of the editing options under the video thumbnail, a new window appears that has your video preloaded. You can choose from different options and edit your video. This editing tool doesn’t require any professional training, and with its simplified interface, becomes easy for anyone to use. 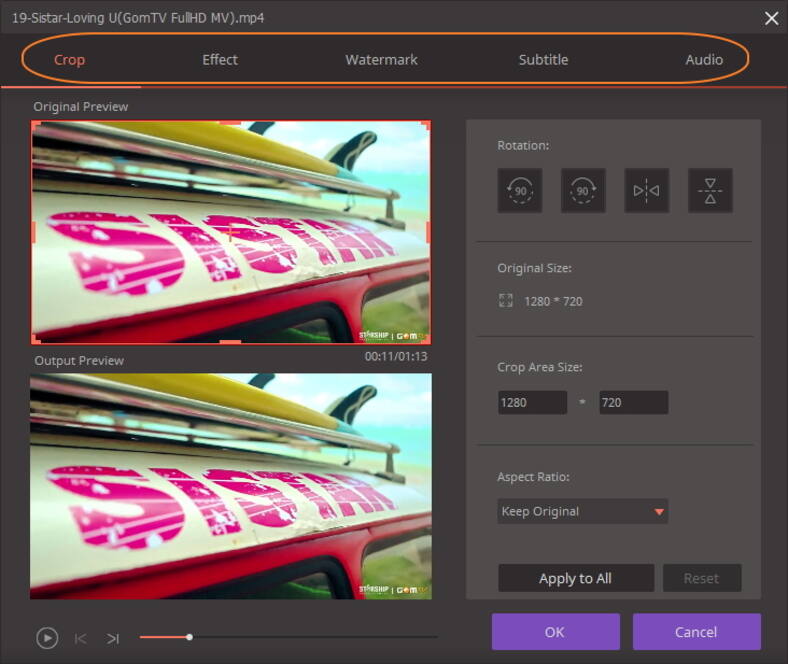 Once the editing process is complete (some may skip this option if they did not edit this video), you can start the conversion by clicking on the Convert All button in the bottom right corner. You can track the progress of the conversion in your video and also cancel it if you feel there is something else to be edited. 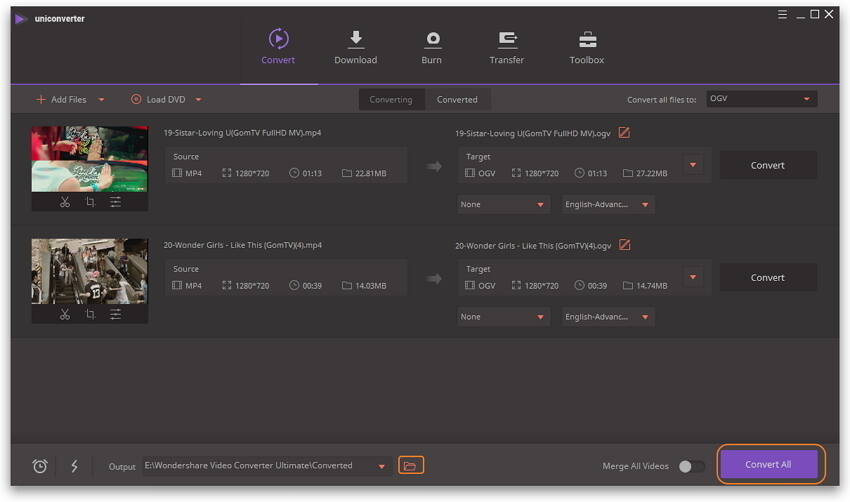 With its simplified and guiding interface, the online MP4 to OGV converter Convertio can assist anyone, from an amateur to a professional in converting an MP4 file to an OGV file. This is completely free and no need to install any app.

Steps on How to Convert MP4 to OGV Free:

Step 1: Start your browser and go to the page of https://convertio.co/mp4-ogv/.

Step 2: Add MP4 file from your PC, Dropbox, Google Drive or URL. Please note the file size should be less than 100MB, otherwise, you will be prompt to apply a premium plan.

Step 3: Select the ouput format OGV from the Video category, select the destination folder Google Drive or Dropbox, then click Convert to start the conversion process. 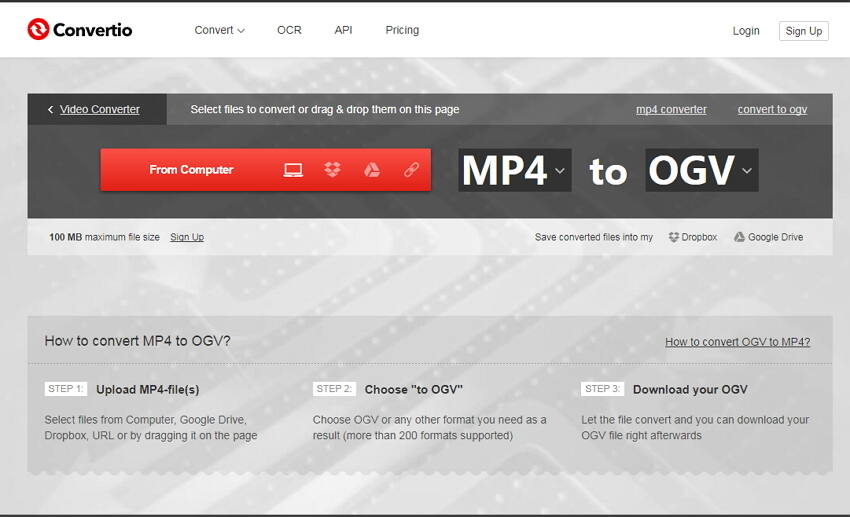 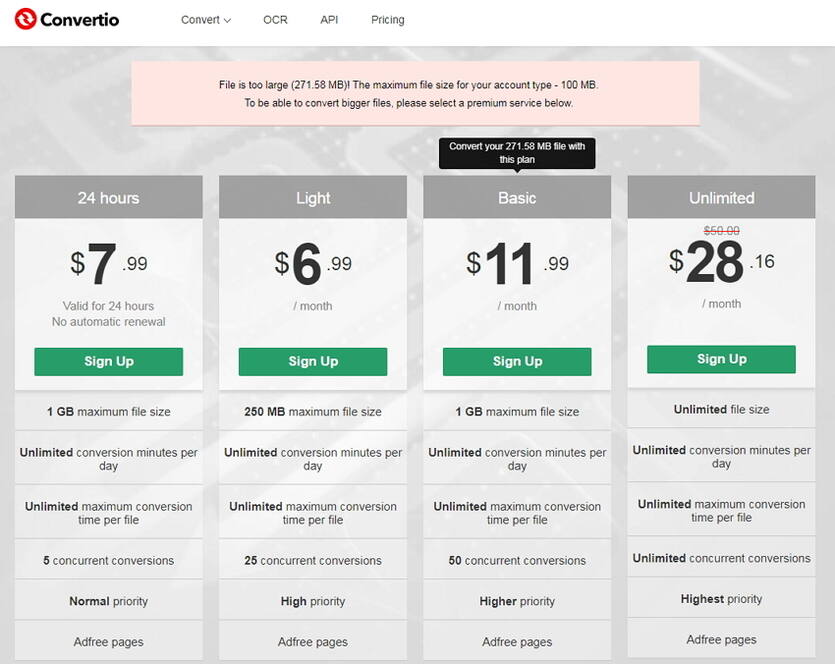 A relatively lesser known file format, OGV allows streaming and manipulation of videos. OGV is closely related to OGG. For those who don’t know, OGG is a video bitstream container format. Surprisingly, OGV file format can multiplex many different and independent open source CODECs for text, audio, and video. OGG has had its numerous CODECs incorporated into various commercial as well as free media players, along with portable players, thus catering to different manufacturers, which happens to be a giant leap in itself. The OGV files come in handy as we encounter its usage on web pages using the HTML5 tag. Often, these files are casually referenced as OGG files in HTML, even though the underlying file format is OGV.

2. How to play OGV files in Windows and Mac?

3. Difference between OGG and OGV:

Often, many people end up confusing OGG and OGV file formats. While they share some similarities and have same underlying supporting formats, it is important to note that OGG can be used for both audio and video purposes, while OGV is mainly a video file container.

OGV file format is useful for people hosting their own websites, portals, and e-commerce websites, and you can easily convert your files in this format using Wondershare UniConverter (originally Wondershare Video Converter Ultimate).