If you are facing any issues with playing and opening MP4 videos on your Mac, you would need an MP4 player. Though MP4 is a widely accepted format, at times, due to codec and other issues, it might play and open on your Mac, and the need for a third-party player arises. The topic below will guide you with the best MP4 player Mac.

To play your MP4 files hassle-free and in high quality on Mac, Wondershare UniConverter works as the best software. The program has a built-in video player that can play videos in almost all formats, including MP4. The player also supports an array of additional features like playing a video playlist, adding subtitles, changing the video playback speed, and more. Not only playback, but you can also even convert MP4 files to over 1000 formats and devices.

MP4 files can be added from the device, camcorder, DVD folder, ISO file, and IFO files.

Option to take a screenshot, add subtitles, and change the video playback speed.

Convert MP4 to other formats and vice-versa.

Open the software on your Mac system, and from the main menu, click on the Video Player tab on the left side. Click on the Add Files icon or Open File button to browse and add the MP4 videos. 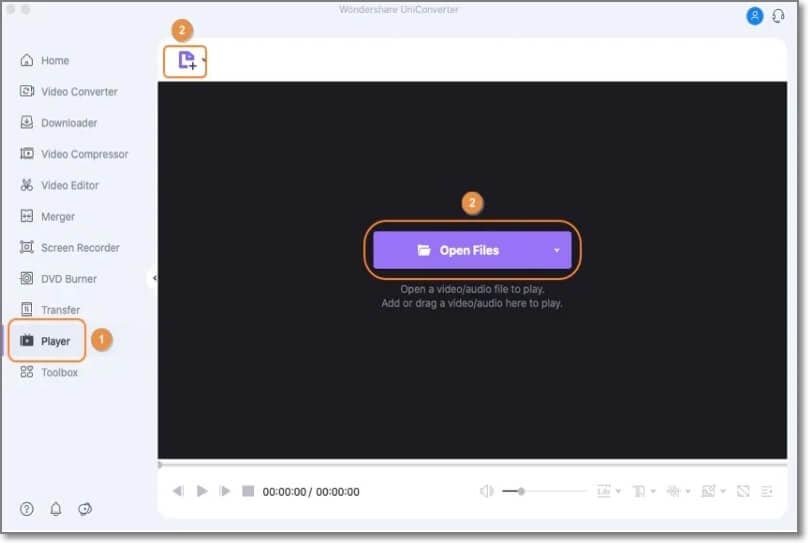 Multiple videos to create a playlist can also be added. 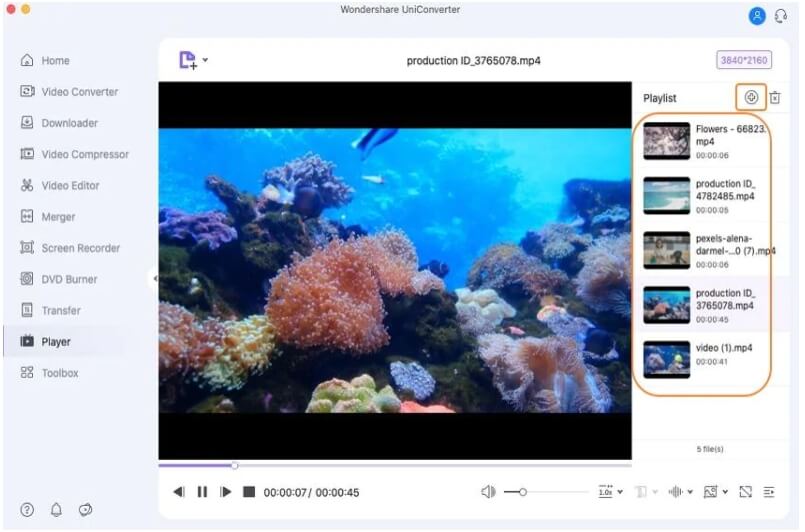 The added videos will appear on the right side of the interface under the Playlist section.

You can play the desired files or the entire playlist using the previous and the next video tabs. Other settings that can be customized include video speed, adding subtitles, capturing screen, playing in full screen, and collapsing. 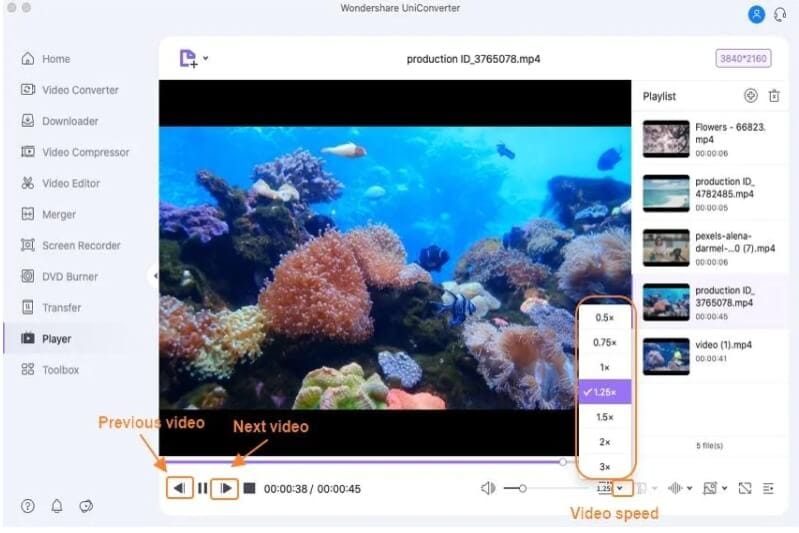 The option for adjusting the volume is also there. 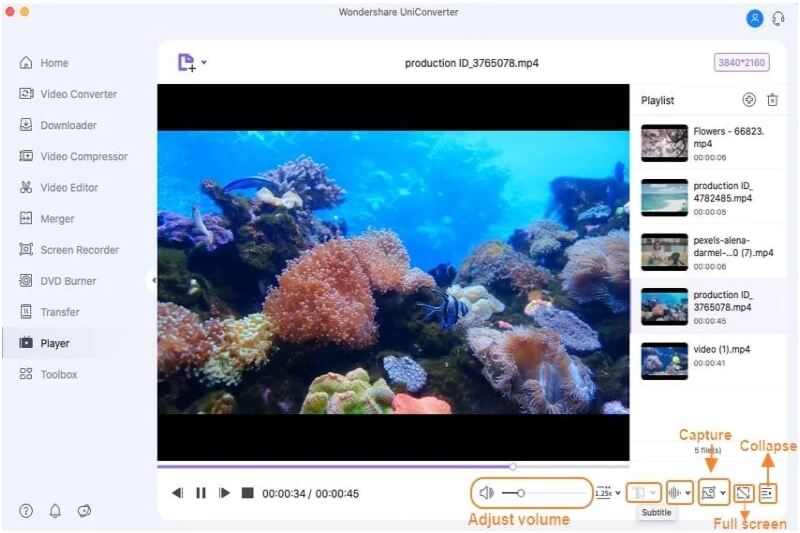 Launch the software and select the Converter tab from the main interface. Browse and add the MP4 videos by clicking on the Add files icon or the +sign. 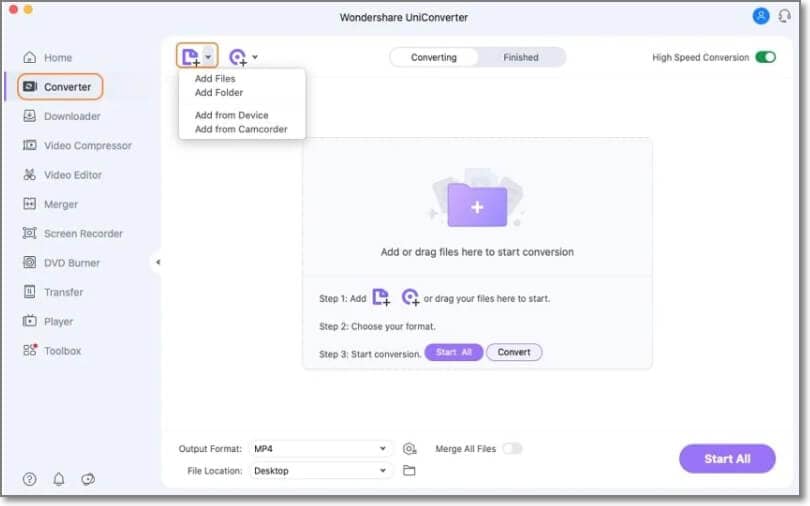 At the Output Format tab on the bottom-left corner, expand the drop-down menu and select the target format from the Video list. Also, select the file resolution. 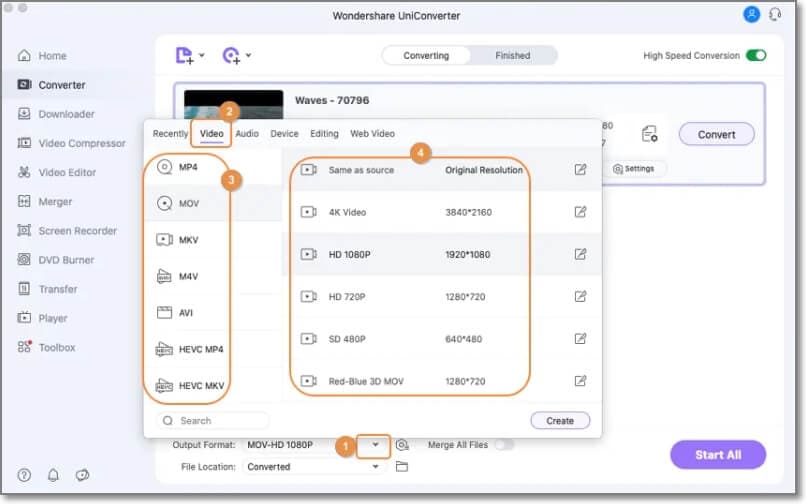 At File Location, select the desktop folder to save the converted files. Finally, click on the Start All button to start the conversion. 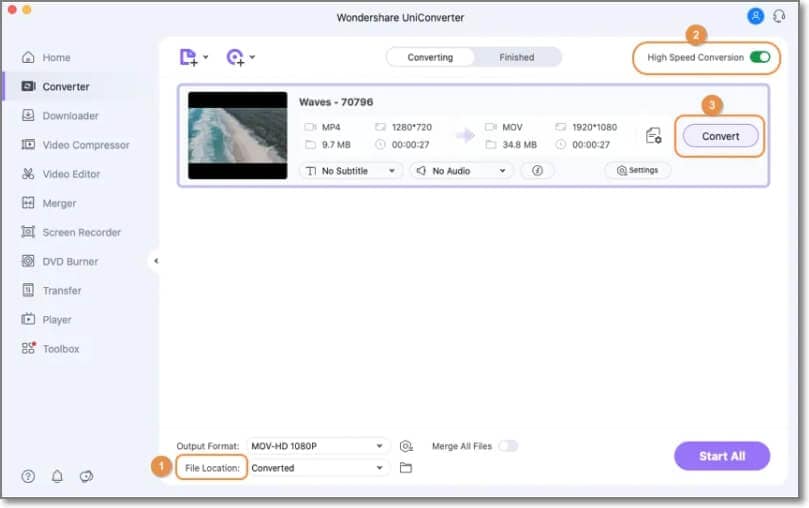 If you are in search of free MP4 Mac players, check the list below.

Using this free Mac media player, videos in MP4, AVI, and other formats can be played without any need for additional codecs or plugins. The player supports several additional features like switching between the audio tracks, managing playlist, play-speed adjustment, and more. 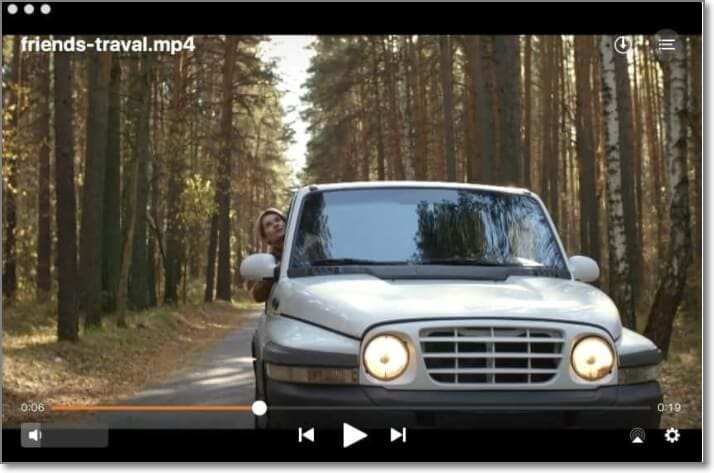 Free MacOS media player supporting key formats like MP4, AVI, and many others.

Advanced features like streaming, PIP mode, and others are supported only in the paid PRO version.

The playlist plays only alphabetically by name.

This is a free video player that can play 4K, 1080p, and 360 degrees videos. The tool supports all popular formats, including MP4, and it supports streaming Airplay & DLNA enabled media. 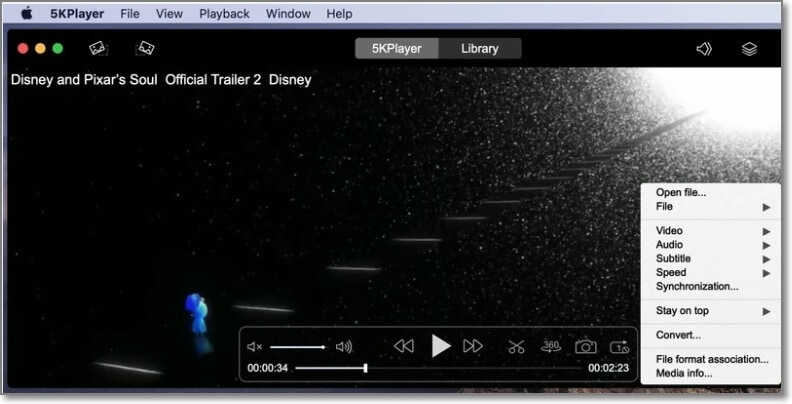 Support a wide range of video and audio formats.

Optimization is not very effective.

This free Mac MP4 video player allows playing videos of high video and audio quality. The interface of the tool is simple to use. 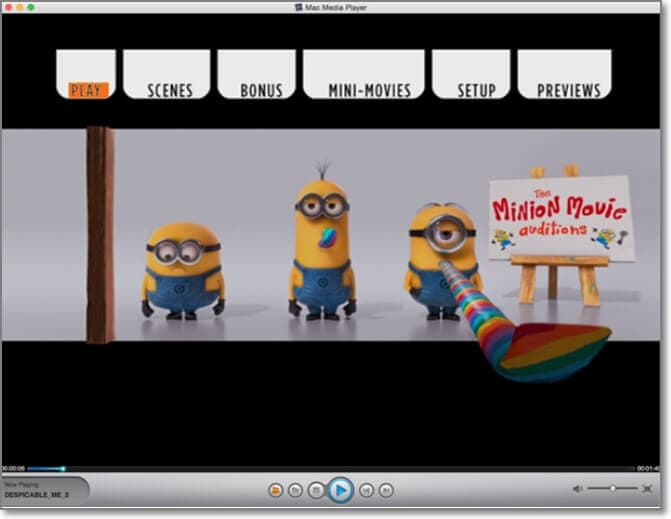 No option for file customization.

This is a free and open-source media player that is compatible with multiple platforms, including Windows, Mac, and Linux. The player is known for its support of a wide range of formats, including advanced codecs. 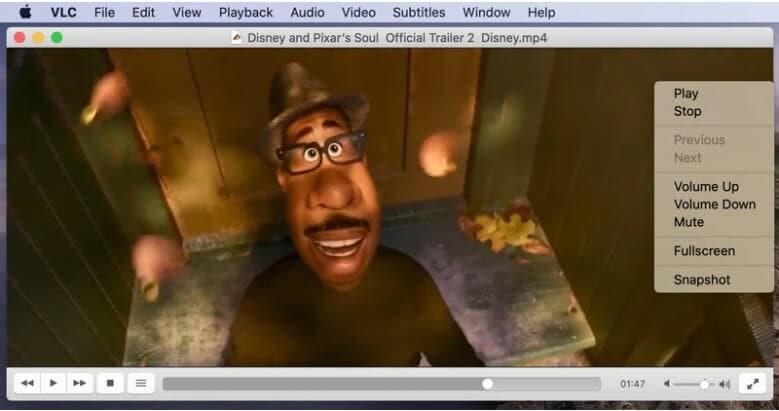 Great for everyday use with additional features like conversion, editing, and more.

The interface is not very intuitive.

This is a basic and decent MP4 video player for Mac that allows playing HD videos and also offers subtitle controls. The player part of the program is free to use, but if you want to convert files, you need to pay. 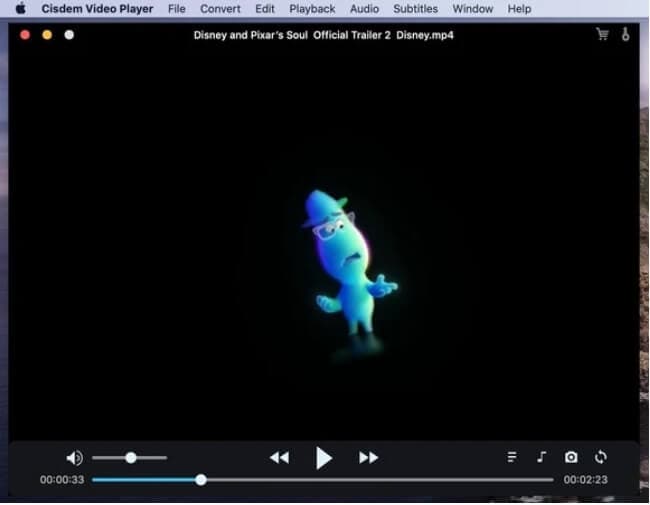 The user interface is not very impressive.

Compatibility: Mac OS 10.5 or above

To play high-quality videos in MP4, AVI, DivX format, this is decent software to use. Videos up to 4K can be played using the program, and it also features a built-in TransferWizard for burning videos to a USB, DVD, or computer. 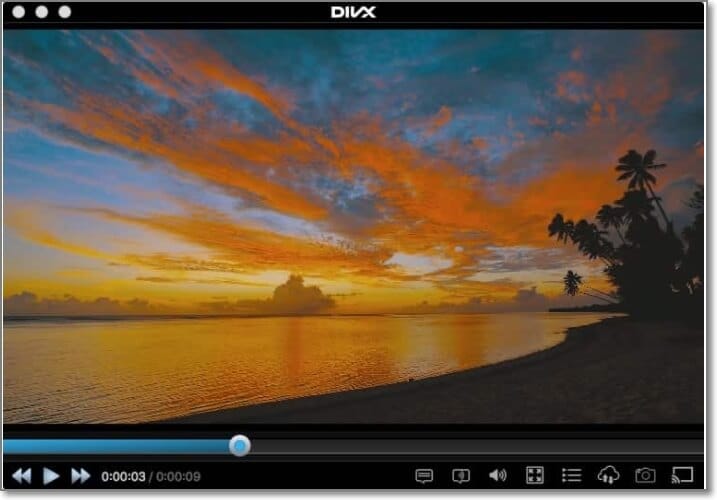 Play MP4 and other videos in HD and UHD quality.

Issues of other software being installed without permission.

Developed by GOM Lab Software Inc, this is among the top-rated free video players that support a wide range of formats, including MP4, MKV, FLV, and more. Videos in HD quality can be played along with support to 360-degree videos. 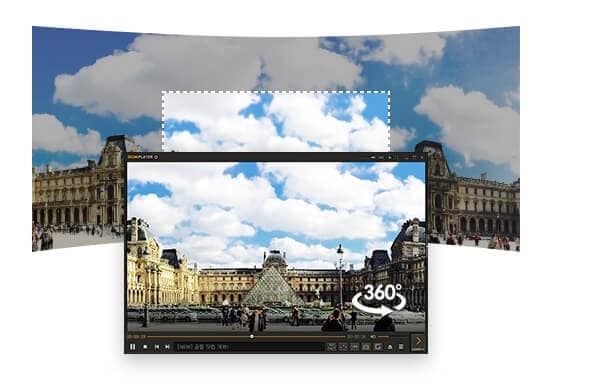 Support a wide range of formats.

Compatibility: Mac OS X 10.7 and above

Play your MP4 and other video files quickly using this free tool that also supports playback of damaged files. The tool comes with an array of additional features to enhance your overall playback experience. 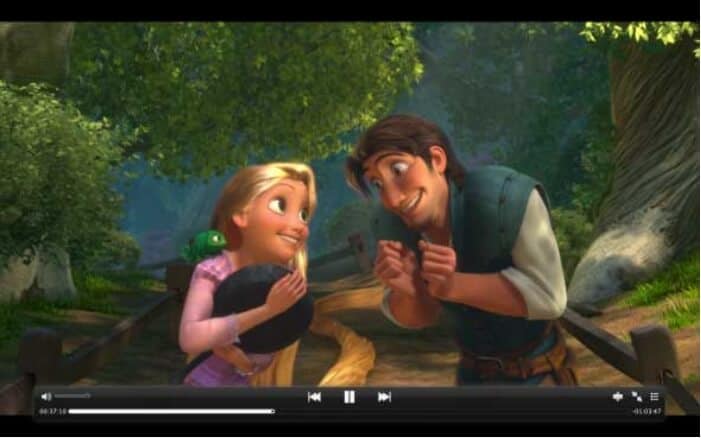 Support to an array of formats, including MP4, WAV, AVI, ASF, and more.

They play damaged files as well.

Comes with support to multi-touch, auto-encoder subtitles, gesture, and more.

Allows playing videos from online sites, including Vimeo, YouTube, and other sites.

A lot of CPU space is taken by the tool.

QuickTime supports playing several videos and other media file formats, including MPEG-4 (mp4 and m4v). MP4 is a container format having different audio and video codecs, and if the codecs are not supported by QuickTime, you will have issues when MP4 won't play on Mac.

VLC is a popular and widely used media player that offers multi-platform support and allows playing videos in an array of formats, including MP4. If you are looking for a simple free video player with basic additional features, VLC is a good choice, but if you want advanced features along with MP4 playback, Wondershare UniConverter is the best MP4 player for Mac. Using the Wondershare tool, you can not only play videos in all key formats but also perform functions like video conversion, editing, downloading, compression, recording, and many others.

Are you looking for a high-grade AMR converter to alter the format into a more popular option? Read this post to know your choices.

How to Convert MOV to MP4 with VLC on Mac and Windows?

This article will show you how to export to MP4 in Final Cut Pro at 3 steps. Don't miss the easy tutorial.

Best 6 MP4 Converters Without Watermark in 2021

[Proven solved] How do I convert VLC to MP4? Read this article to follow the super-easy steps to convert VLC videos to MP4 without quality loss.

This guide will explain how to convert ts to mp4 on Mac/Windows, also online and free. And you can play ts videos on your iPhone or other portable media players after the conversion.

Converting MP4 to AVI while maintaining good quality is a goal desired by many people.This article tells you 3 methods to convert MP4 to AVI free online.