With so many digital file formats these days, it's common to common across MOD and TOD files. But unlike MP4 and MP3, which offer universal compatibility, you may need a dedicated TOD or MOD player to open these video formats. So, apart from VLC, which other media player can open MOD losslessly? Don't worry if you don't have one in mind. This post has multiple suggestions. You'll also learn some technical details about the MOD format.

How to play and convert MOD file?

MOD and TOD are digital video formats typically created by digital tapeless camcorders. It's more like AVCHD and HDV formats. You can record MOD and TOD on JVC camcorders, although you can also record MOD on Panasonic and Canon.

The SD video in MOD is saved in a MPEG-2 container with .mpg or .mod filename extensions. On the other hand, HD videos are also stored in MPEG containers, although with a .mod extension. So, in short, MOD video is recorded in SD quality, whereas MOD is captured in HD resolution.

Meanwhile, MOD videos can open on any media player that supports MPEG-2 video streams. As such, you can easily open a MOD file on a DVD player without recompression. On the other hand, TOD videos can't be opened using consumer video playback equipment. So, you may need to convert MOD/TOD to MP4 or other standard video formats.

It's also worth noting that there's a MOD file created by Karsten Obarski. This format is predominantly used to store music. It's the first module format and can save a set of instruments, including samples and the number of patterns showing when and how the samples are played. In most cases, MOD audio files are used as the background audio of video games.

Part 2. How to open a MOD/TOD file

As promised at the start, I'll show you several methods to open a MOD file on Mac or Windows. Below are the three options:

Wondershare UniConverter is the perfect all-in-one desktop program for all your needs. It's compatible with Mac and Windows and can open MOD or TOD without any hassles. The robust media player features playback controls for creating playlists, adjusting the playback speed, taking screenshots, adding SRT subtitles, adding background audio, and changing volume. Besides playing MOD, UniConverter can also convert MOD to MP4, MP3, AVI, and other standard formats. You can also edit MOD by trimming, splitting, splicing, adding speed effects, etc. It's definitely worth a try!

Below is how to open MOD on Wondershare Free Media Player:

Step 1 Open the media player and load the MOD file.

Install and fire up UniConverter and tap the Player tab on the left rail. Then, drag and drop your MOD file on the media player window or click Add Files to load the video. You can also directly upload the MOD or TOD file from the recording camcorder.

After uploading the MOD file, the video will start playing automatically. But as said before, you can adjust things like volume, playback speed, arrange playlists, and so on. You can even add local subtitle files. 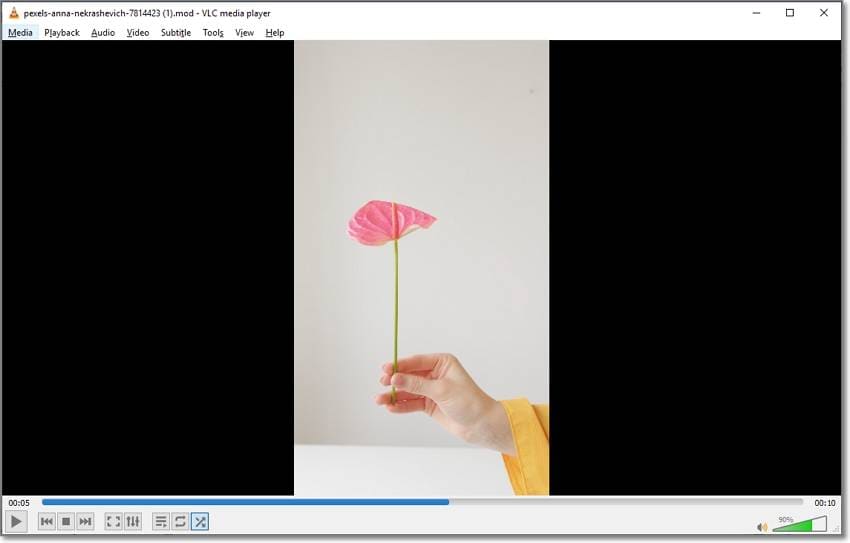 VLC Media Player ticks all boxes of the perfect desktop player. It's a free, open-source MOD player, meaning you just install it, and it's yours for life. After installing VLC, you can proceed to open any video format, including MOD, AU, OGG, FLV, WebM, VOB, DV, AVI, you name them. Not only that. VLC also houses a robust file converter for converting MOD to MP4, MP3, 3GP, AVI, etc. Also, this handy program features a smooth screen recorder. However, VLC can do with refreshing looks. In addition, it lacks 8K support.

Convert MOD/TOD to MP4 and other formats.

The UI has been the same for ages. 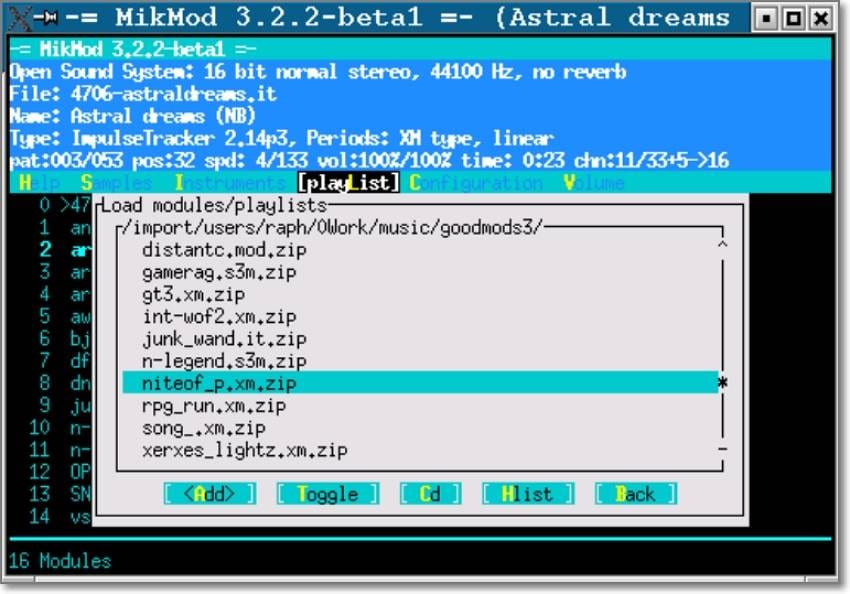 Lastly, use MikMod to open any module format, including MOD, XM, IT, and S3M. It's compatible with computer platforms such as Unix, macOS, and Windows. Besides opening the module formats, MikMod can also play archive files, including RAR, ZIP, TAR, LHA, LZH, etc. However, MikMod's release has somewhat stopped these days.

Pro tip: You can open MOD as long as you have a MPEG-2 player. Just change the filename extension to .mpg and open MOD with lossless quality. But as said before, you should convert MOD to MP4 for better compatibility.

There are several advantages of using MOD files. First, because this video format is based on MPEG-2 video streams, you can easily open it on any MPG/MPEG video player, including Windows Media Player and DVD players. Also, converting MOD to MPG is as easy as simply changing the filename extension. And best of all, MOD files contain raw, unaltered data.

But on the other side, just a few Panasonic and Canon cameras can record MOD videos. This means finding a MOD player or editor can be a challenge, especially for mobile phone users. Also, MOD is recorded in SD resolution, meaning the picture quality isn't that good. So, convert MOD to MP4 or MPG using Wondershare UniConverter.

How to play and convert MOD file?

Now you know what MOD and TOD files are. Remember that MOD can also represent a module format for saving sound instruments and samples. But in the case of video formats, I recommend converting MOD to MP4 for smoother playback on any platform.