It was believed that with the heartwarming finale from "Toy Story 3," this beloved saga had reached its end, but because of the audience's fondness and hype with all the characters for almost a decade, an amazing sequel was passed onto a new generation with all the familiar toys. Toy Story 4 is the fourth installment and the sequel to Toy Story 3 in Pixar's Toy Story series and is a 2019 American computer-animated comedy film. It is directed by Josh Cooley and produced for Walt Disney Pictures by Pixar Animation Studios. Its screenplay is given by Stephany Folsom and Andrew Stanton. The new characters are voiced by Jordan Peele, Christina Hendricks, Tony Hale, Keegan-Michael Key, Keanu Reeves, and Ally Maki, while the old characters are voiced by Blake Clark, Bonnie Hunt, Tom Hanks, Tim Allen, John Ratzenberger, Estelle Harris, Don Rickles, Wallace Shawn, Kristen Schaal, Annie Potts, Joan Cusack, Jeff Garlin, and Timothy Dalton.

Toy Story 4 is a great movie with amusing jokes, a sweet story, and striking animation. This movie is quite nicely balanced, and the whole thing feels deeper sue to its melancholic tale. Pixar's animation has become more lifelike and complex, and behind spatial dimensionality and graphical details, there's a real wow factor to the studio's renderings. This photorealist quality can make you get lost in the childhood memories of your favorite toy. This movie is about toys and their secret lives and how they fear that one day they will become boring, outdated, not special, and incapable of a child's attention.

Following the events of Toy Story 2 nine years earlier, Woody and Bo Peep attempt to rescue Andy's remote-controlled car RC from a rainstorm. Bo is given to a new owner after the rescue. Woody considers going with Bo but then decides to stay with Andy. Before Andy goes off to college, he donates them to a new owner Bonnie who is a younger child. Woody struggles to adapt to an environment while the other toys are grateful to have a new child. He is unhappy because he is not the most favorite one as he was with Andy. Bonnie takes off the sheriff badge from Woody and puts it on Jessie instead. She doesn't even bother to give Woody a role during her playtime. Bonnie is nervous about starting her kindergarten.

Woody worries about Bonnie and sneaks into her backpack on the day of her kindergarten orientation. Woody secretly recovers the materials and several pieces of garbage from the junk, including a plastic spork, after a classmate takes away Bonnie's arts and crafts supplies. She creates a bipedal spork with googly eyes with them and calls her "Forky." In Bonnie's backpack, Forky comes to life and experience an existential crisis. He thinks that rather than a toy, he is garbage and should remain in a trash can. Forky is confused about whether he is a toy or trash?

Woody takes the responsibility to stop Forky from throwing himself away in a trash can as he is now one of Bonnie's favorite toy. 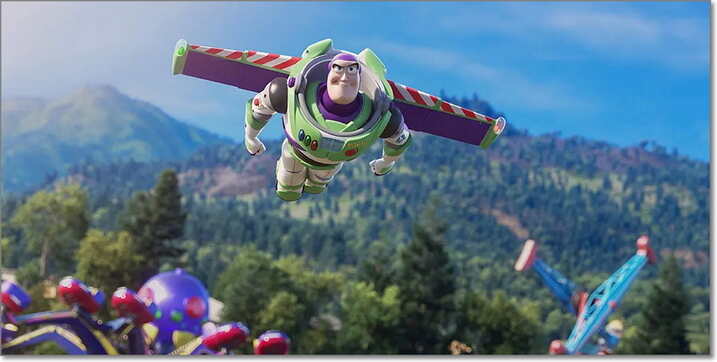 Woody is symbolically postponing his extinction every time he stops Forky from jumping into a garbage can, sneaking off Bonnie's pillow at night, or breaking away and descending into the trash bucket near Bonnie's bed. Forky jumps out of the RV window when Bonnie's family goes on a road trip. After Woody follows him and explains how important he is to Bonnie, he decides to go with Woody and return to Bonnie. Woody spots Bo Peep's lamp in an antique store window near the RV park where Bonnie's family is staying. Hoping to find her, he goes in. They encounter a talking doll named Gabby Gabby, who wants to replace her broken voice box with Woody's. Gabby captures Forky while Woody successfully escapes. Woody reunites with Bo Peep at a playground. Bo Peep is a self-sufficient single lady, and her sheep Gruff, Billy, and Goat, are now living as "lost" toys, and they are not devoted to one child.

Bo agrees to save Forky so he can get back to Bonnie and help Woody. Buzz gets lost at a fairground while searching for Woody and becomes a carnival game prize. With the help of plush toys Bunny and Ducky, he escapes. They meet up with Bo and Woody and unsuccessfully try to rescue Forky from Gabby, the store owner's cat and her ventriloquist puppet henchmen with the help of stuntman toy Duke Caboom and pocket toy cop Giggle McDimples. Bo and the other toys argue over whether to go back after they fail to rescue Forky. Woody tells Bo that being loyal is something a lost toy would not understand and refuses to go back, saying that rescuing Forky is the only purpose in his life. Gabby expresses her longing for a child's love when Woody encounters her again, unaided. 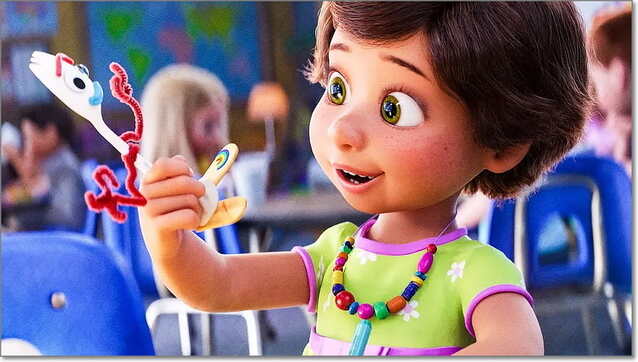 Woody willingly trades his voice box for Forky after sympathizing with Gabby for her plight. Even after getting her voice box fixed, Gabby is rejected by her ideal owner Harmony. After watching this and comforting a heartbroken, Gabby Woody invites her to become one of Bonnie's toys. To help Woody and reconcile with him, Bo returns with the other toys. They all go to the carnival and force Bonnie's father to drive back to the carnival by interfering with the RV's controls. It was hilarious to see Bonnie's dad almost going to jail for all the mischief that her toys did.

In the carnival, Gabby sees a crying girl who is lost. She decides to become her toy instead of Bonnie's. Gabby encourages and comforts the child to approach a security guard so that she could be reunited with her parents. Bo and Woody share a bittersweet goodbye at the carousel, but he is reluctant to leave Bo again. Woody decides to stay with Bo instead of going back to Bonnie after Buzz tells Woody that Bonnie will be okay even without him. Woody bids a heartfelt goodbye to his friends and gives his sheriff badge over to Jessie. Bo and Woody starts a new life with Giggle, Ducky, Bunny, and Duke and dedicate themselves to finding new owners for the lost toys. Bonnie creates a second spontaneous toy out of a plastic knife on her first day of first grade who is suffering the same existential crisis as Forky once did, who immediately becomes obsessed with Bonnie. 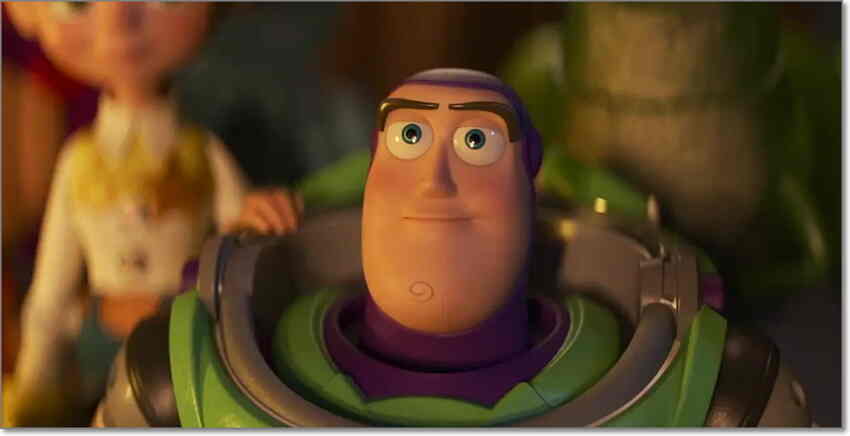 If you have followed this animated series, this sequel will leave you in tears and nostalgia when this movie will end. Toy Story 4 is a heart-wrenching end to a beautiful story of our favorite toys made a decade after its predecessor. Toy Story 4 continues the franchise's excellence in almost every way and is a must-watch for the audience of all ages.