1917: A Chilling Masterpiece of War Terrors

1917 is an epic war film, a cinematic flex, and an award-winning first world war drama directed, co-written, and produced by Sam Mendes, who has stretched a one-shot format to a feature length. This movie is very well made by the people who are very good with the camera and hits all the right notes. 1917 won the 77th Golden Globes Award and the 73rd British Academy Film Awards.

1917 is a inspired by the stories told by Mendes paternal grandfather Alfred Mendes who served in war1917 looks like a single continuous shot where we go through a difficult and traumatic journey through war ravaged France during the first modern conflict. Long expansive shots that follow the protagonist as they fulfill their mission are a feast for the eyes as they add realism to this movie. In 1917 the hells and terrors of WWI were perfectly executed by Mendes.

During World War I, an impossible task is given to Dean Charles Chapman and George MacKay, who are perfectly cast as Tom Blake and Schofield. These lance corporals are recruited to venture into the territory of their enemies and deliver a message to their fellow troops to initiate a deadly catastrophic assault. A "strategic withdrawal" has been made by Germans suggesting that they are on the run, but they are armed and lying in wait to resist the intended British push. 1917 is a briskly paced, focused story and a race of two British soldiers against insurmountable odds and time.

Roger Deakins, who has worked on "Skyfall," "The Shawshank Redemption" and "Blade Runner 2049" has shown that he in one of the greatest cinematographers in film history by his visual awe-inspiring movie 1917. Cinematography, set designs, musical score, acting, directing, and the raw emotions invoked by this movie shows how exceptionally this movie made. 1917 is gentle, satisfying, trilling, tense, unique and a deeply beautiful movie.

The audience gets invested in the characters of this film and gets fascinated by the peaceful opening but within a few minutes it leads to emotional and poignant climax. Anyone can be blown away by this soul shaking, astounding, haunting, and earth shaking movie and exceptional filmmaking mastery on display. The film grabs the audience from the beginning and keeps them gasping and entertained till the end. There is not a single boring minute or a slow part in this film. 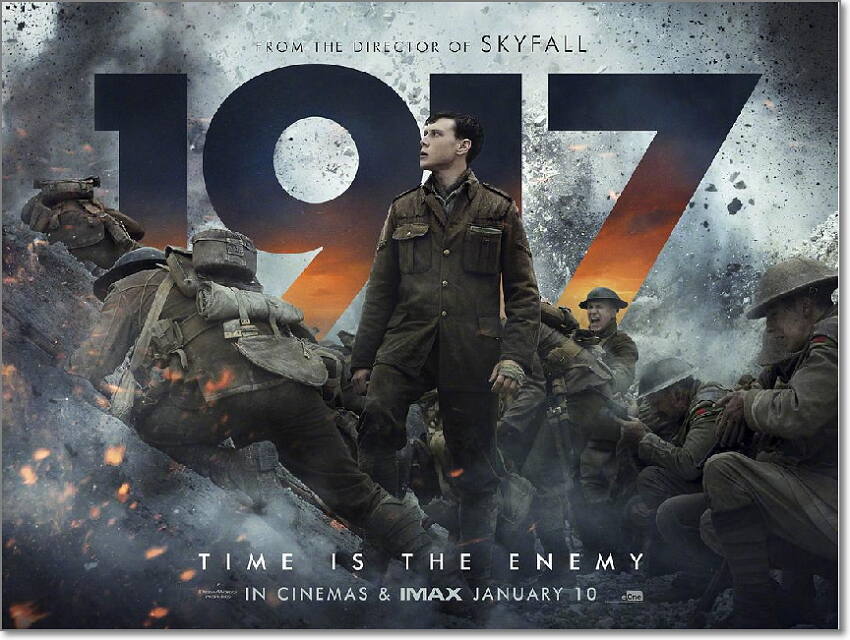 The movie begins on April 6, 1917 where it has been observed that the German army has not retreated or pulled back from a sector of Western Front in Northern France rather, they have made a strategic withdrawal. The German army is in ambush waiting with artillery at the new Hindenburg Line to crush the British. Telephone lines have been cut in the British trenches and General Erinmore orders two young soldiers, Tom Blake and William Schofield to deliver a message to Colonel Mackenzie.

Schofield is a sarcastic cynic whereas Blake is friendly and earnest. Both these soldiers are young and just out of their boyhood. The reason why Blake was chosen for this mission is that he is uniquely motivated to finish this mission because if he doesn't like then his brother will be among the 1600 soldiers to get entrapped and brutally massacred. A scheduled attack has been called off by Colonel Mackenzie, which can put the lives of 1600 men, including Tom's brother Joseph Blake in jeopardy.

To reach the abandoned trenches of Germans Blake and Schofield crosses the no man's land. They discover a booby trap tripwire in an underground barrack, which is activated by a rat. Blake saves the life of Schofield from this explosion and they both escape. After arriving at a deserted farmhouse Blake and Schofield try to keep a burned pilot from a German plane which got shot while fighting with an Allied aircraft. Schofield kills the German pilot for stabbing Blake. While consoling Blake Schofield promises the dying Blake that he will complete this mission and write to his mother.

He takes Erinmore's letter, Blake's dog tag and rings and is picked up by a British unit passing from there. The British group couldn't cross due to a destroyed canal bridge near Ecoust-Saint-Mein and Schofield parts with them to cross the bridge alone on his own. A German sniper starts shooting at Schofield. They both starts shooting at each other concurrently. As a result, Schofield gets unconscious while the German sniper gets killed. At night when Schofield regains his consciousness, he finds that the town has been set in fire. Upon encountering another German soldier, he takes refuge in a deserted building. A French woman who is also hiding there with her infant treats Schofield's wounds. Schofield in return give them his canned food and milk. 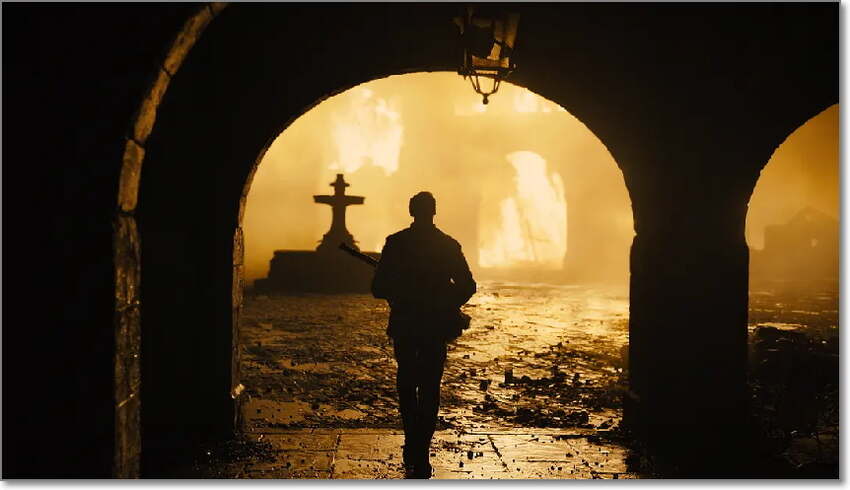 The French women stops Schofield from going but when he hears the chimes of a nearby clock he leaves as it is already morning and he is running out of time. Schofield escapes by jumping into a river when he encounters more German soldiers. Before reaching the riverbank, he is swept over a waterfall. Schofield then finds D company of the second Devons which is the last wave of the attack in the forest. He tries to contact Colonel Mackenzie when the company starts to move towards the front.

The trenches were too crowded for Schofield to reach Colonel Mackenzie in time so as the company begins its charge he runs across the battlefield and forces his way to meet Colonel Mackenzie. Colonel Mackenzie unwillingly calls off the attack after reading the message. Schofield finds Tom's brother Joseph who was in the first wave but is luckily unharmed and informs him about his brothers mission and how he died. Schofield also gives him the rings and dog tags of Tom. Despite being in a distraught after learning about his brother's death Joseph thanks Schofield for his efforts. Schofield ask Joseph whether he can write to their mother to tell about the bravery and heroism of Tom to which Joseph agree. In the last scene Schofield is sitting under a tree exhausted and he is looking at the photographs of his two daughters and wife.

The first World War was devastating for all countries and was one of the deadliest wars in the history. No one is a winner in a war. There are moments of deep sorrow, horror, brutality, aching loss and compassion all in all it is a great film depicting the true terrors of a war. 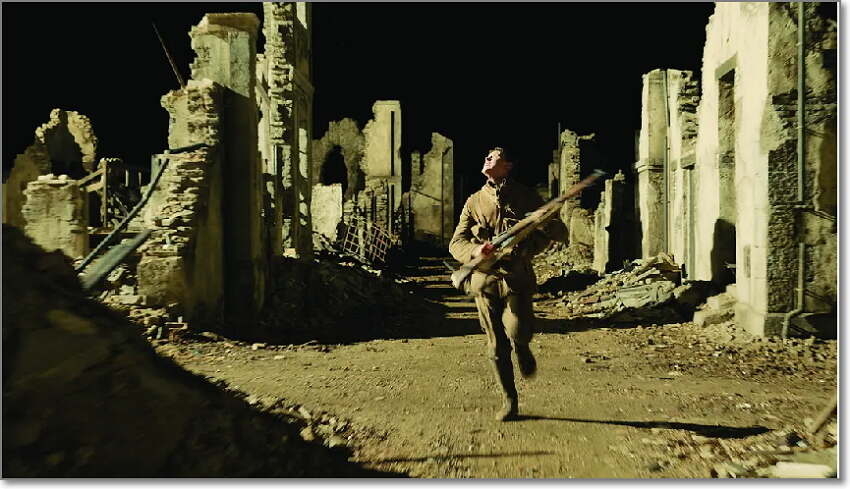 1917 is a perfect balance of heartfelt human interactions and the terrors of war. Even though we are all well aware of the outcome of WWI but still watching this movie allows you to reflect on the sacrifice and service of the soldiers and horror and brutality of the war. 1917 is a huge dedication to the unselfishness and shows the abundance and brutality of the horrors that existed in the trench warfare. 1917 is a game changer and there would hardly be a person who would deny its heart, grit and originality. It is one of the greatest war films and when this journey will end 1917 will leave you breathless or even in tears.