The Irishman: A Classic Tale of Fading Mob Glamour by Martin Scorses

The Irishman is Martin Scorsese's latest sweeping tale of crime and politics. Based on Charles Brandt's book I Heard You Paint Houses and adapted by Steven Zaillian, this movie is a masterpiece where the best actors of all time like Al Pacino, Robert De Niro, and Joe Persci have reunited to deliver an epic tale of fading mob glamour. 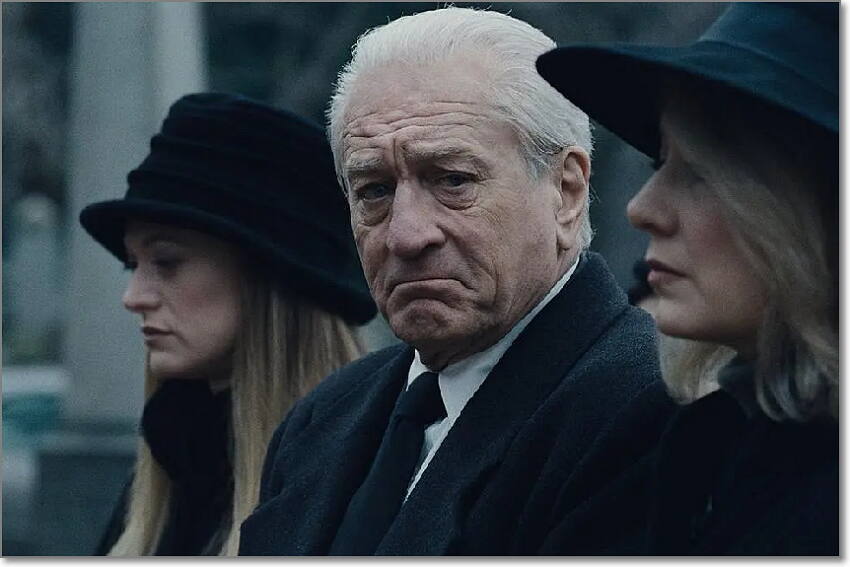 The Irishman is more grounded and far too subtle, but it's far from being dull, gray, and boring. This movie has some very serious scenes, but still, it is surprisingly humorous and gives a blast of nostalgia now and then. The film is three hours and thirty minutes long, but due to the amazing cinematography, it doesn't feel that long and doesn't have a single dragging moment. From the usual modern movies that we are used to, the cinematography of this movie is quite different and doesn't have an overabundance of wide-angle or symmetric shots.

The Irishman rarely seems incoherent or thematically fractured despite its flash-back/flash-forward trickiness. The actors are digitally rejuvenated and aged. The de-aging technology used in The Irishman is impressively unobtrusive, and after some time, you become quite confused about how old the lead actors are.

De Niro, as Frank Sheeran, leads us not only through the flashbacks of wild years of a hitman but also his ascent, decline, and fall.

Frank is a World War II veteran and a hitman for a crime syndicate in his 80s who take a trip down his memory lane with a mixture of pride and lament while sitting alone in a wheelchair in a retirement home. With chin pushed up, mouth turned down, white hair and cloudy eyes staring ahead, he starts to speak, and his statement becomes the narration of the film.

All this is framed in a long but mundane 1975 road trip to a wedding from Pennsylvania to Michigan with Sheeran at the wheel, his boss Russell in the passenger seat, and their wives sitting at the back. Frank ruminates about a past in which blood was mercilessly splashed upon walls and faces. Here the road trip literalizes the idea of life as a journey.

With breathless on-screen headlines, many characters are introduced, detailing their names and hour of death. Only a few died a natural death while most had tragic, violent ones.

In the 1950's Frank was working as a delivery truck driver in Philadelphia when he started to sell some contents of his shipment to Skinny Razor, who was a local gangster. He was also a member of the Philadelphia crime family, which was headed by Angelo Bruno. Frank was accused by his company for stealing, but union lawyer Bill Bufalino saves him after he refuses to name his customers. Frank gets introduced to Russell Bufalino, head of the Northeastern Pennsylvania crime family by Bill. Frank starts working not only for Russell but other members of the South Philadelphia underworld as well.

Frank is then introduced to Jimmy Hoffa, head of the International Brotherhood of Teamsters by Russell. Jimmy talks to Frank on the phone and asks him I heard you paint houses? Here painting houses is a euphemism for murder and contract killing. To which Frank replies, "Yes, I do." painting houses also refer to the blood which splatters on the walls after the revolver is fired, which shows the cold and brutal nature of these hitmen and mafias who had no emotion or regret for what they did. 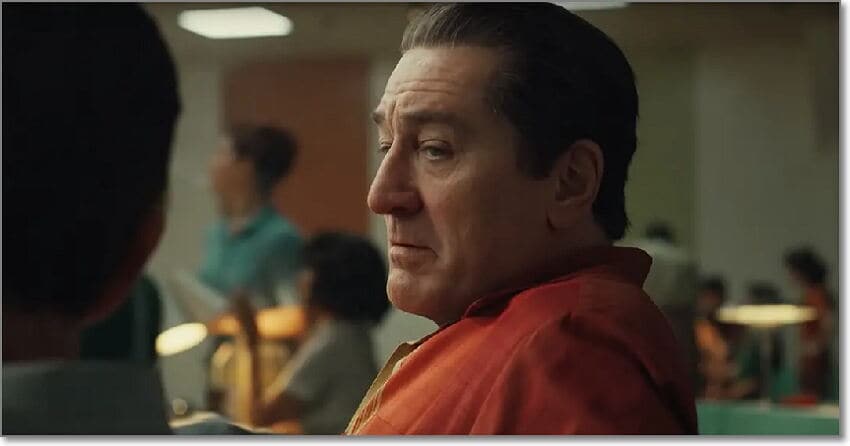 Jimmy is struggling with increasing pressure from the federal government and a rising Teamster Tony Pro. Frank agrees to work with Hoffa and become his bodyguard, spy, and an aide. Frank and Hoffa had such a deep bond of friendship that they shared a hotel bedroom and as the most powerful union boss stood in his pajamas, brushing his teeth, they both looked more like a happily married couple and less like troublemakers. Hoffa becomes close to Frank's family, especially his daughter Peggy. Peggy's silence cuts Frank to the core as she seems distanced with him.

Frank's journey as a hitman is also contextualized by the political events of that era, including the Bay of Pigs fiasco, the election of John F. Kennedy, the Cuban missile crisis, the hunting of Hoffa by Robert Kennedy, John F. Kennedy's assassination, and Watergate. Hoffa was arrested and was found guilty for jury tampering in 1964. Meanwhile, Frank also transported arms to the CIA and played his role in the cataclysm coded "Dallas" in 1963.

Frank "Fitz" Fitzsimmons worked as a replacement for Hoffa during his imprisonment, but soon he starts giving an interest-free loan to the mafias and overspending the pension fund of the labor union. While Hoffa's relationship also deteriorated beyond repair with Tony Pro, who was imprisoned for extortion.

President Richard Nixon in 1971 reduce the sentence of Hoffa and forbids him from taking part in any Teamster activities till 1980.

Despite his parole terms, Jimmy Hoffa plans to reclaim his status and power, and his growing disrespect for other Teamster leaders and interests in related crime families becomes a sore spot for Russell. In 1973, during a dinner in Frank's honor, Russell asked Frank to warn Hoffa that the heads of the crime families are disgruntled with his behavior. Hoffa, however, ignores this warning and claims that he is untouchable and knows things that could make those threatening him end up in prison.

While heading to the wedding of Bill's daughter in 1975, Russell informs Frank that he has been selected to execute Hoffa because the dons have had enough of Hoffa, and now they want to get rid of him. Frank being Hoffa's executioner, won't be able to warn or save him after they both drive to an airport, Frank boards a plane to Detroit. Hoffa, who had a meeting scheduled with Tony Pro and Anthony at a local diner, is surprised to see Frank arrive late with gangster Sally bugs and his foster son Chuckie O' Brien. Hoffa is informed that the meeting is moved to a house. Upon entering the house, Hoffa realizes that this was a setup. He turns around, but it is too late as Frank shoots him twice at point-blank range. Hoffa's body is cremated to remove all traces of him. 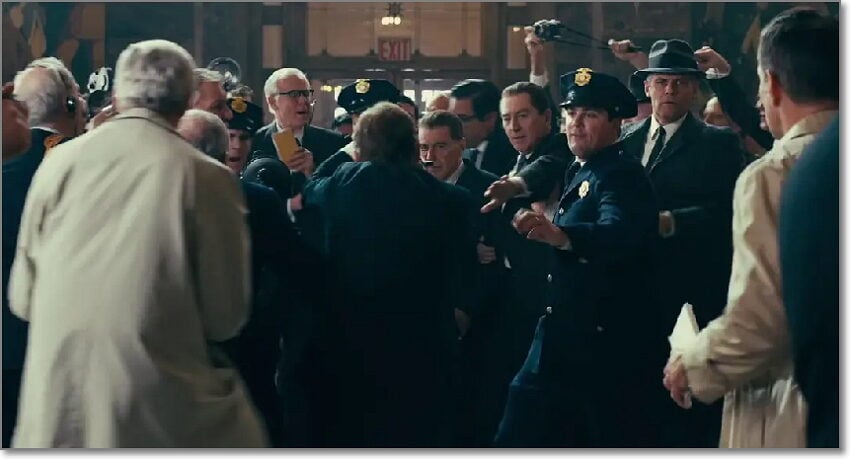 Russell, Frank, and Tony Pro are convicted of any charges, but none includes the murder of Jimmy Hoffa. One by one, they all begin to die in prison. Frank is released from prison eventually and placed in a nursing home. Frank tries to reunite with his daughters, but Peggy cuts all her ties with him after Hoffa's disappearance as she was well aware of his brutal crimes and knows that he is guilty as hell.

The last ending moments of this movie, Frank went through the old pictures of his family and came across a picture of Hoffa, and Peggy is so powerful as it reminds him how he loved them the most, and he lost them. He lost his best friend when he killed him and his daughter when she realized that he was the one who did it.

A Catholic priest gives Frank an absolution of crimes he committed during his life, and as the priest leaves his room, Frank asks him to leave the door slightly open. The door half ajar shows how Frank is emulating Hoffa's habit as he used to keep the door of his bedroom slightly open as he trusted Frank. The door represents the trust which was broken by Frank.

This movie is about loss, sin, regret, age, and how you can be swept along by history like a passive object, even if you played a significant role in shaping it. The movie is the last and best of its kind. The Irishman is a farewell from these living legends to all the biographical crime thrill lovers and is a fantastic masterpiece.