Green Book is a 2018 American biographical comedy-dramatic feature film, directed by Peter Farrelly, who also co-produced and co-wrote the film, along with Brian Hayes Currie, and Nick Vallelonga.

Together with his brother Bobby, Farelly is widely known to moviegoers for directing and producing mostly cult oddball comedιes (Dumb and Dumber), as well as romantic comedy films (There's something about Mary). Plunging, alone this time, into more dramatic territory, namely racial discrimination, Farelly poignantly manages to craft a formidable rendition of the social status of African Americans in the early sixties, turning the movie into a smooth ride, tastefully garnished with a humorous touch.

The leading actors make a remarkably matching pair in totally unconventional (for them both) roles) Mortensen had to put on weight (reportedly 40–50 pounds) to look stockier, while Mahershala Ali was taught basic piano skills by original score composer Kris Bowers, also acting as a stand-in when close-ups of hands playing the piano were shot. It was certainly worth Ali’s effort, as for his performance, he received the Academy Award for Best Supporting Actor, as well as the Golden Globe, Screen Actors Guild, and BAFTA awards for Best Supporting Actor.

Viggo Mortensen is a Danish-American actor, musician, photographer, painter, author, and poet. After making his film debut in 1985 in Witness opposite Harrison Ford, he played a variety of notable roles in Brian De Palma’s Carlito's Way (1993), opposite Al Pacino, Tony Scott’s submarine film Crimson Tide (1995), Daylight (1996), opposite Sylvester Stallone, The Portrait of a Lady (1996), based on Henry James's novel, and starring Nicole Kidman and John Malkovich, G.I. Jane (1997), starring Demi Moore, and A Perfect Murder (1998), opposite Michael Douglas and Gwyneth Paltrow.

Worldwide fame came with Mortensen’s role as Aragorn in the epic trilogy The Lord of the Rings (2001–2003). Mortensen won critical acclaim with David Cronenberg's A History of Violence(2005), Eastern Promises (2007), where he was nominated for the Academy Award for Best Actor, and A Dangerous Method (2011), receiving a nomination for the Golden Globe Award for Best Supporting Actor.

Mortensen’s acting is branded by his naturalistic style and methodical way of speaking in a soft, mellow voice. Green book was one of the few exceptions to this rule. 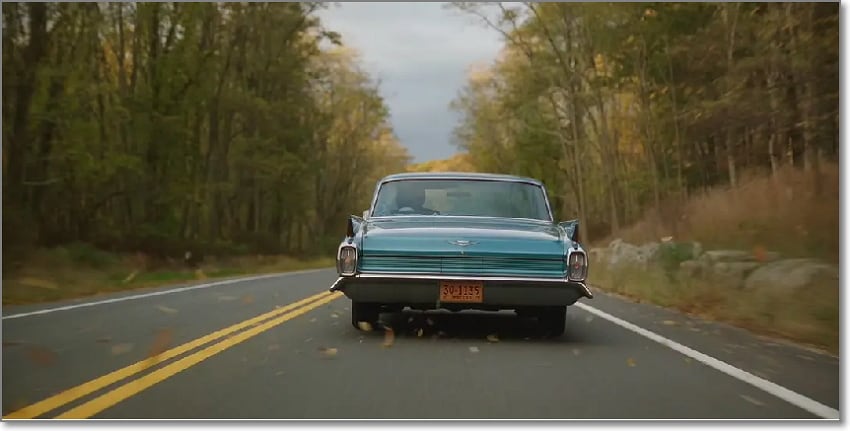 Mahershala Ali is an American actor and rapper. A talented athlete, particularly in basketball, attended St, Mary's College of California on scholarship, earning a degree in mass communication. Ali became interested in performing through summer visits to his father, a Broadway actor, and competing in poetry slams. After landing an apprenticeship at the California Shakespeare Theatre, he enrolled in the acting program at Tisch School of the Arts, earning his master's degree in 2000. The same year, he converted to Islam, changing his name to Ali. He had been raised a Baptist Christian by his mother, an ordained minister.

Ali’s notable roles include Remy Danton in the Netflix series House of Cards, and Colonel Boggs in The Hunger Games: Mockingjay- Parts 1&2, starring Jennifer Lawrence. Ali’s first major film appearance was in the role of Tizzy Weathers, in David Fincher’s The Curious Case of Benjamin Button (2008), opposite Brad Pitt and Cate Blanchett. Ali is the recipient of two Academy Awards (one for Green Book), and a Golden Globe Award for the coming-of-age drama film Moonlight (2016) portraying Juan, a drug dealer who becomes a father figure to a distressed boy in a rough Miami neighborhood. 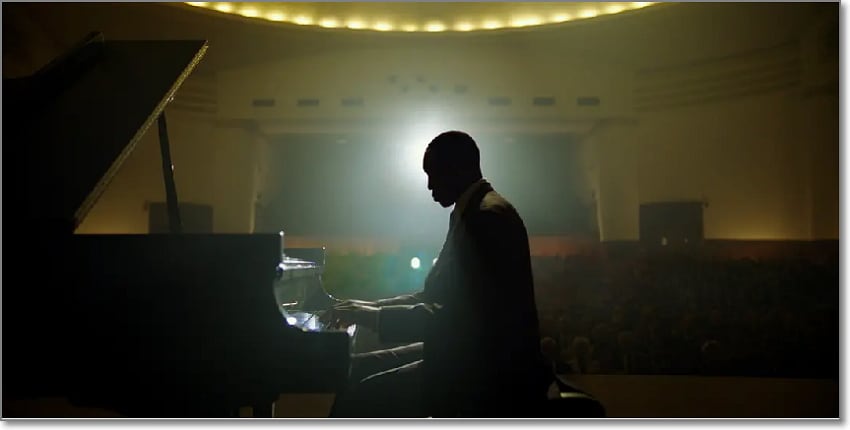 Theatrically released in 2018 by Universal Pictures, and financially celebrated at the box office, Green Book also met with critical acclaim, winning Oscars for Best Picture and Best Original Screenplay at the 91st Academy Awards. It holds a 78% Rotten Tomato approval, and it was presented with the People's Choice Award on its world premiere at the Toronto International Film Festival on September 11, 2018.

Set in the early 60s, and in the still legally segregated Deep South of the United States, the film is based on a true story. An uplifting road movie within the confines of an aquamarine (turquoise) 1962 Cadillac Sedan DeVille during most of its narrative, it follows a concert tour of world-famed African American classical&jazz pianist Don Shirley (Mahershala Ali), of whom Igor Stravinsky said that 'His virtuosity is worthy of the Gods.', and his Italian American chauffeur and bodyguard, former tough nightclub "bouncer" Frank "Tony Lip" Vallelonga (Viggo Mortensen ), who’s looking for a job.

Together with Farrelly and Brian Hayes Currie, the film was written by Nick Vallelonga, who also plays Augie, the Copacabana mobster who offers Tony a "job" while the nightclub is under renovation.

The film derives its title from The Negro Motorist Green Book, a vacation guidebook for African-American travelers written by New York City mailman Victor Hugo Green, an African American. Published from 1936 to 1966, The Green Book became "the bible of black travel during Jim Crow," enabling black travelers, usually on a private car, to avoid public transport hassle, to find lodgings, restaurants, shops, and gas stations that were inclined to serve them along the road, in the times that Jim Crow state and local laws enforced racial segregation in the Southern United States. 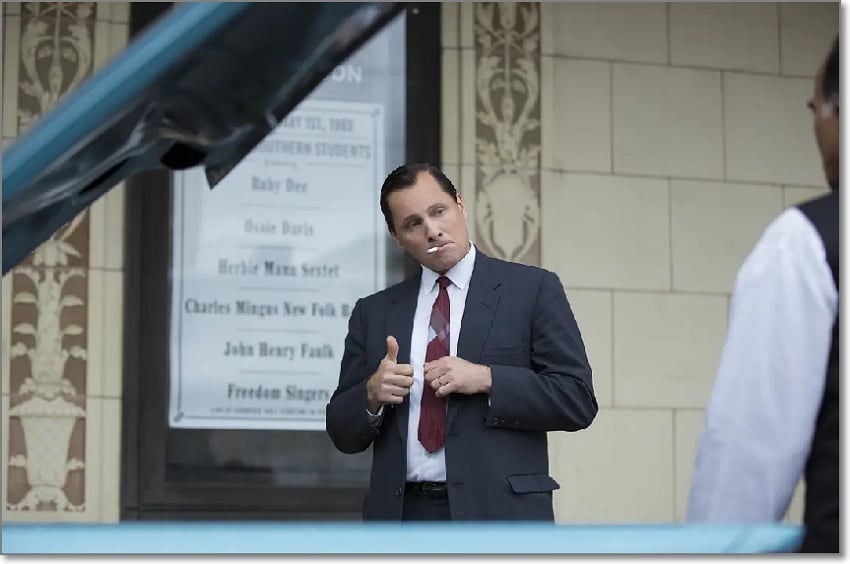 The year is 1962, and it’s ‘business as usual’ at the New York City infamous Copacabana Night Club. The band is playing, and everybody’s happy while working Italian-American bouncer Frank "Tony Lip" Vallelonga (Mortensen), plays a little game with regular patron Gio Loscudo’s (Joseph Cortese) hat. The club is announced to be closed for renovations, leaving Tony and his peers wondering what to do next. Through the Copacabana's, Jules Podell soon gets an interview for a ‘driving’ job, having in the past worked in sanitation as a truck driver. Tony meets Dr. Don Shirley (Ali), a Carnegie Hall affiliate African- American pianist, who is embarking on an eight-week concert tour through the Midwest and Deep South, planning to return to New York on Christmas Eve.

From moment one, it is clear that the two men are worlds apart and complete opposites. However, Shirley hires Tony, as he knows that the South is no playground for people of color, and Tony has strong references and obviously knows his way around. In dire need, Tony accepts with the consent of his wife, Dolores (Cardellini). The record label representative (P.J. Byrne) closes the deal and entrusts Tony with a copy of the Green Book, a traveler’s vacation guide for African-Americans, listing establishments that would serve them, as segregation is prevalent in most southern states. Tony then meets the other members of the trio.

As they travel through the Midwest, the two men begin to reinstate themselves, more out of curiosity than mere necessity. Although he playfully calls him 'doc,' to Tony, it is clear as daylight that Don is no stereotype 'Negro' person, and finds himself shocked and disgusted with the discriminatory treatment Don receives, even from his hosts when he is not on stage. Dr. Shirley is sophisticated, talented, eclectic, and even snobbish, distant from his racial heritage, hardly recognizing contemporary music made by colored folk.

As his drinking problem gets him in trouble with locals in a Kentucky bar, Tony bails him out. 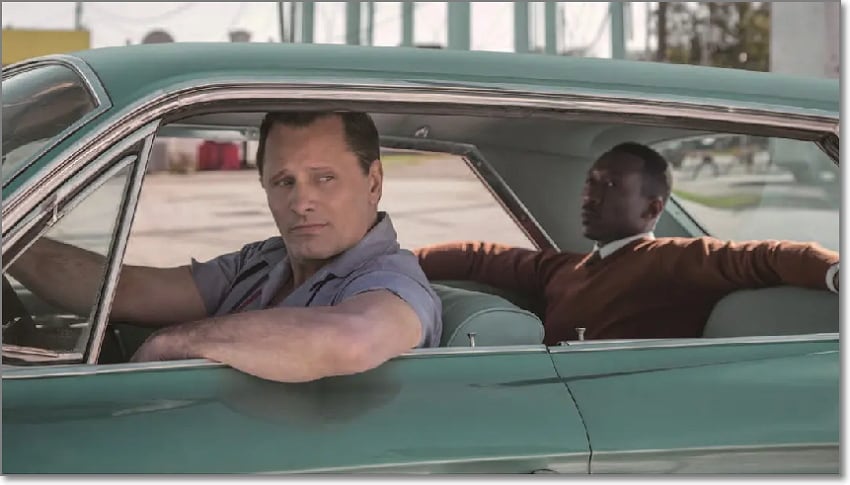 Trouble strikes again in Georgia when Don has a gay encounter with a white man at a YMCA pool and is detained by the police. Tony bluntly bribes the officers, which upsets Don. Tony runs into some old friends in Memphis, who offer him a 'job,' which he refuses. After being pulled over late at night and insulted by two offensive Mississippi cops, Tony takes a punch at an officer, and the two are arrested and put in jail. Don asks to call his lawyer but instead reaches Attorney General Robert F. Kennedy, who sees to their release.

On the night of the final tour performance in Birmingham, Alabama, the oxymoron of a black star performer not being allowed to dine in the same hall as his (white) audience culminates in Don and Tom leaving the club and going to a black blues club for people of color, where Don plays and improvises, together with the Orange Bird band, making everyone get on their feet, dancing. When leaving, Tony finally reveals he does carry a weapon.

Tony and Don immediately head north in a snowstorm. Exhausted from driving at night in the snow, Tony tells Don that he can’t go on. Later that night, the car arrives in the snow-covered Bronx, with Don driving and Tony asleep in the back. Don wakes Tony and tells him he's home, wishes him a merry Christmas, and drives away, despite Tony’s protest. 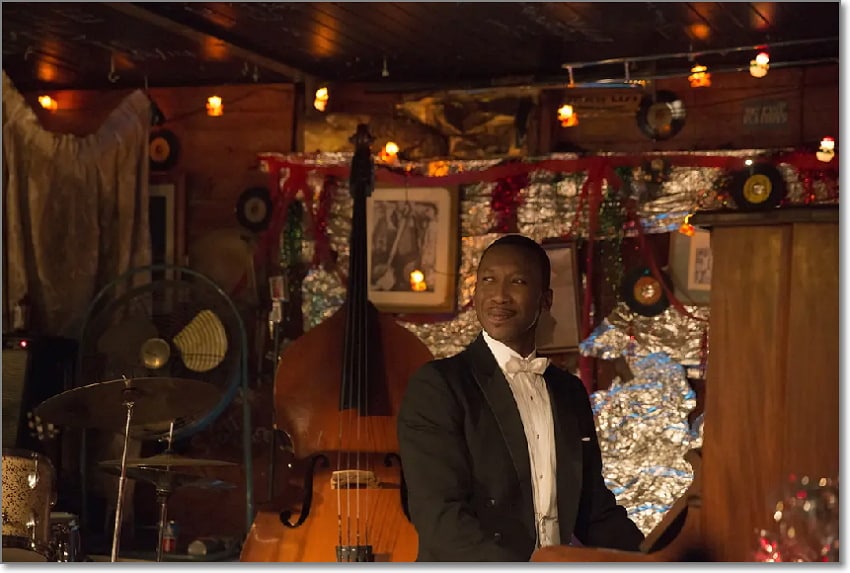 Back at his Carnegie Hall apartment, Don resents being alone on Christmas Eve. We soon see him as he suddenly appears in the hallway at Tony's place, with a bottle of champagne. Tony welcomes Don with an embrace, then introducing him around. Don finally meets Dolores, who embraces him and whispers in his ear her warm thanks and appreciation for helping Tony with the letters.

Through misgivings and injustices they face on the road, Tony and Don bridge their chaotic idiosyncrasies, bonding friendship, and understanding that would last forever.