Best film editing software to create your movie with ease

Film editing and making on a computer may seem easy until you get hands-on. That's because there are many techniques involved if you're to make an Oscar-award-winning movie. And that's without mentioning you need to find the best film editor with all the necessary tools. So, in this article, you'll learn all standard film editing terms and the best film editing software for Mac and Windows PCs.

Why choose UniConverter to edit your film: 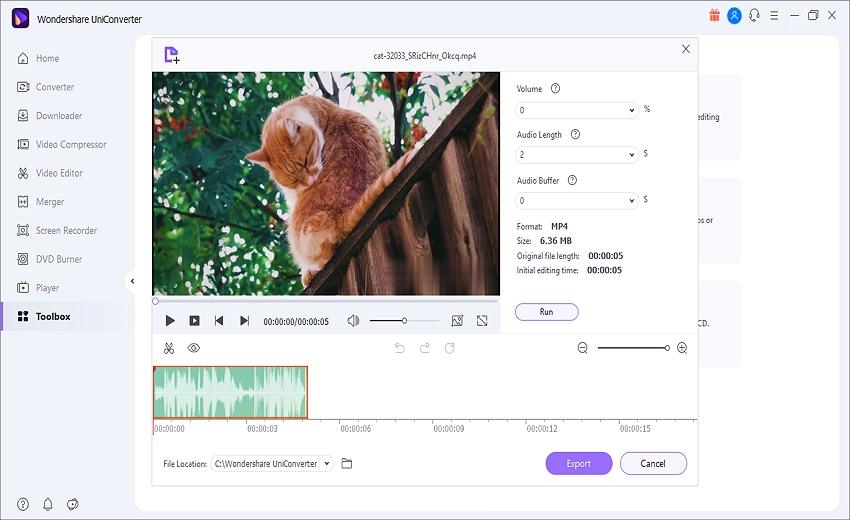 As discussed above, trimming is an important technique to have in the film editing industry. Fortunately, UniConverter's Smart Trimmer has everything a beginner filmmaker needs to trim, splice, rearrange, and merge videos. Firstly, you can set the audio volume percentage to auto-trim video sections with rates lower than the specified one.

If that doesn't impress you, set a specific audio playback duration (1 to 20 seconds) to auto-trim and erase sections with audio length less than the specified one. And if all else fails, manually trim the clip on the video timeline by merely entering the start and stop time of the section to erase. 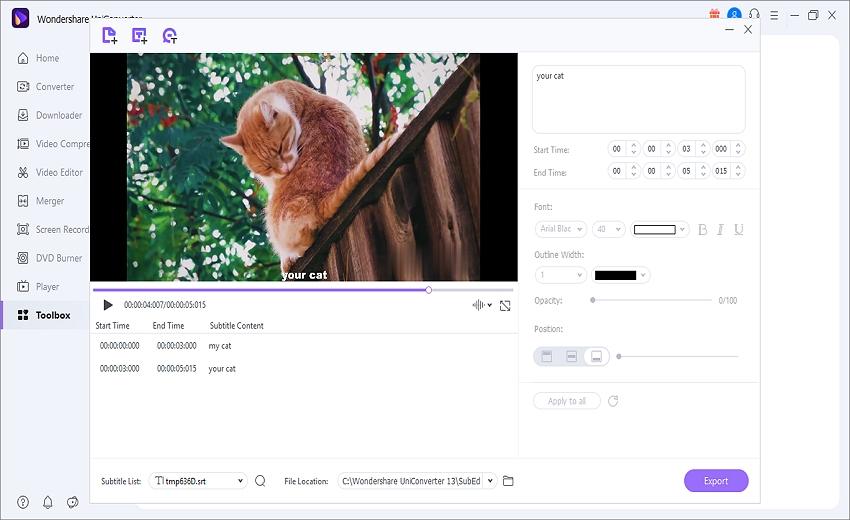 Creating rhythmic and attractive subtitles can change the way viewers engage with your video. Therefore, use the Subtitle Editor tool to edit and upload SRT subtitles to your video clip. With this tool, you can select a specific subtitle track on your video and edit the text, duration, font size, font color, opacity, and other subtitle features. And you can also search the subtitles for your video with UniConverter. What sets it apart from other apps is that it can automatically create subtitles for your video of any language. 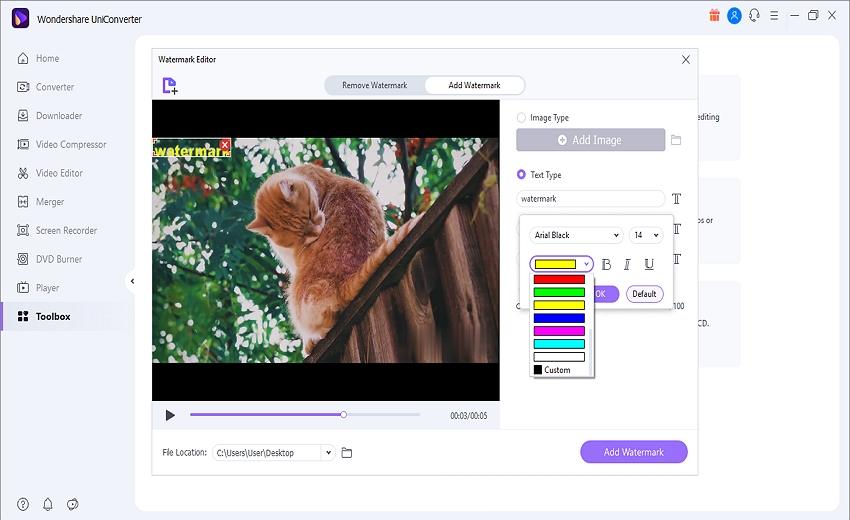 Are you planning to share your video on platforms like Vimeo, YouTube, Facebook, TikTok, and so on? Then, use the Watermark Editor tool to insert text watermarks or image logos into your videos. Doing this will go a long way towards preventing piracy of your videos by making them unique. Apart from adding watermarks, UniConverter also lets users erase obstructive watermarks and logos from videos with a mere click. 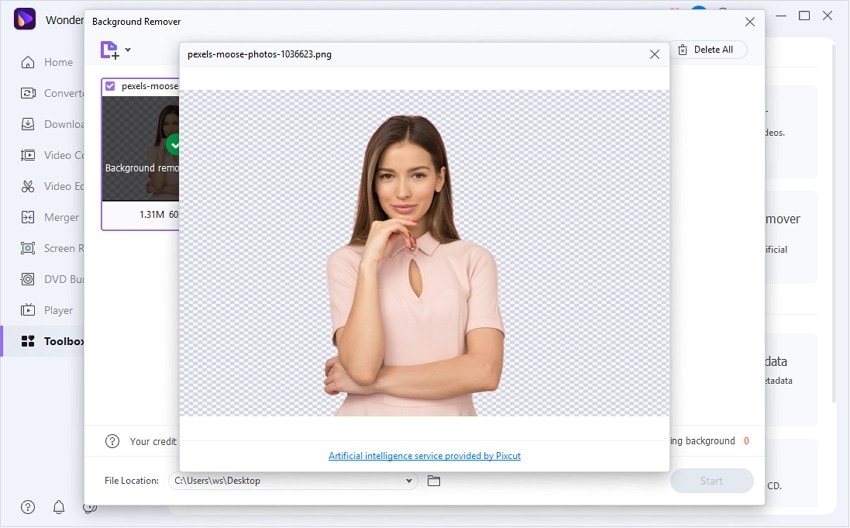 Remember the green screen technique we discussed above? Well, UniConverter allows you to remove the image background of picture formats like JPG, PNG, TIFF, and GIF with the brand-new Background Remover tool. Moreover, you can load as many picture formats as possible, and the background removal speed is super-fast. 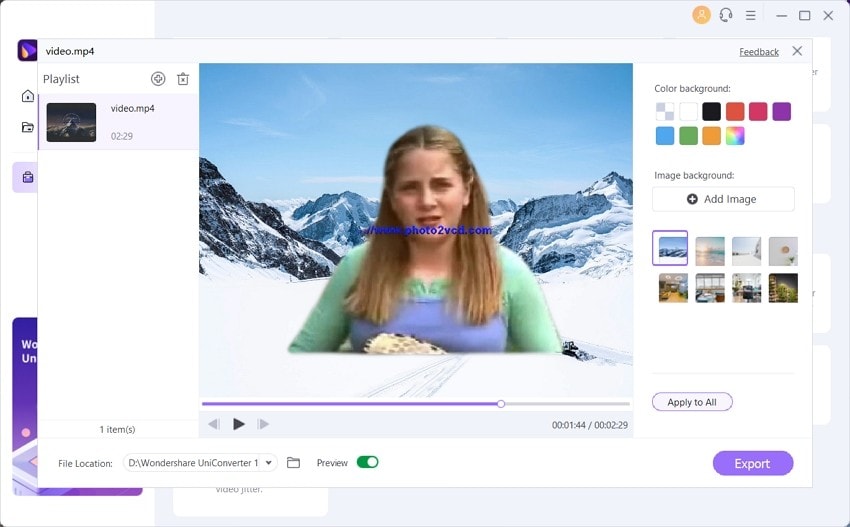 AI Portrait is a value-added feature of UniConverter. You can change any video background with it. It is the best auto video background changer and remover, which can 100% automatically remove the background from your videos. Besides, there are different templates for you to replace the video background. With artificial intelligence, you don't need to have professional programs or skills. Therefore, UniConverter is a good one among film editing softwares. 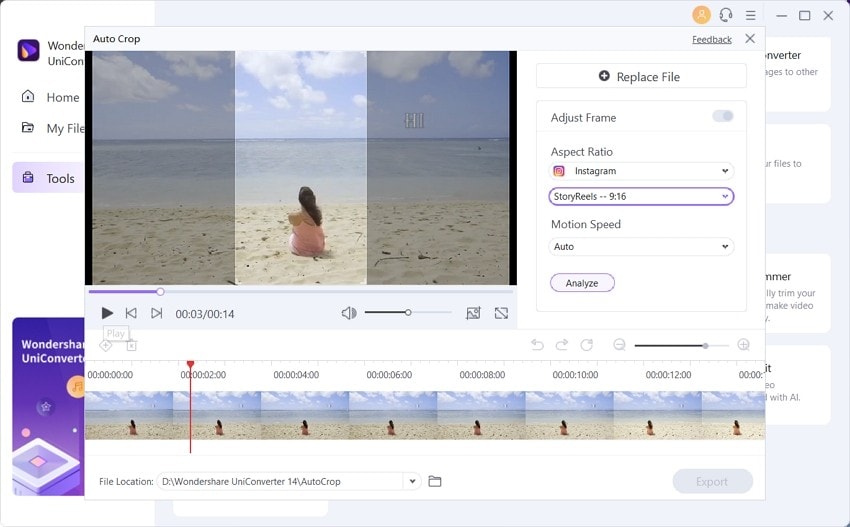 Intelligently identifies the actions in your video and reframes the clips for different aspect ratios, which can save your time and effort.

Add or remove image and text watermarks from your videos effortlessly.

Part 2. Film editing: Everything you need to know

After learning about the film editing software in the market, let's familiarize ourselves with these important words:

What is the cross-cutting approach? 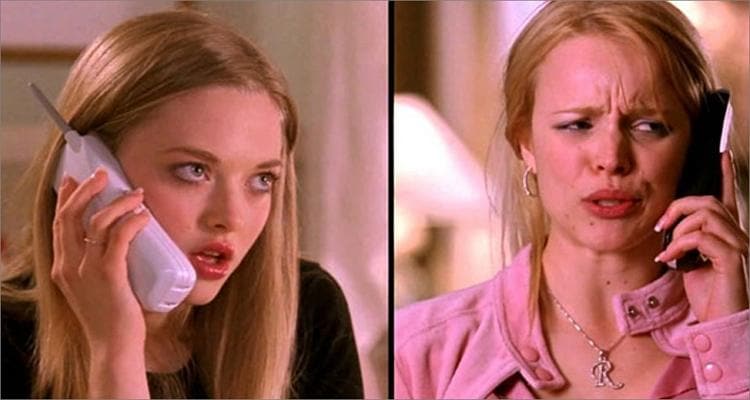 Cross-cutting or parallel editing in film editing is a technique used to establish actions happening simultaneously but in different or the same locations. In this technique, the camera will cut away from one activity to another while displaying both consecutively. Usually, filmmakers use cross-cutting to depict two or more movie characters conversing on the phone. Filmmakers can also use Cross-cutting to build suspense. For example, an FBI agent may be rushing to defuse a time-ticking bomb.

What does a green screen do? 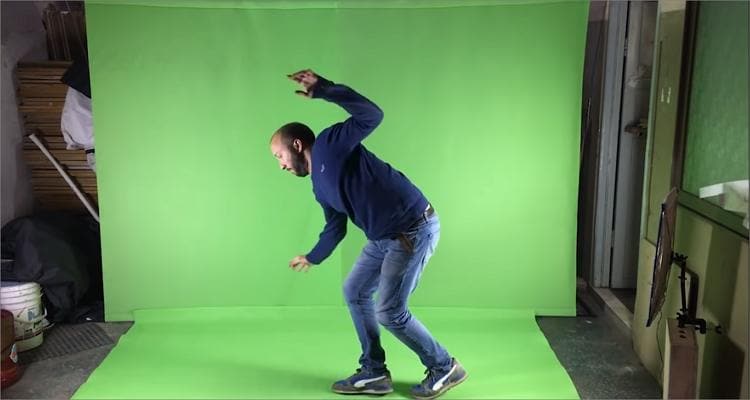 Sometimes called "chroma-keying," a green screen is vital in the film editing process. It is a technique where a foregrounded action is fused with different background footage or an independent film. Here is how the process works; actors are filmed in front of a giant, bright green backdrops. Then, the green color range is isolated or removed and replaced with another background. Essentially, this technique makes movie scenes and characters appear in exciting locations when the movie was shot at a sound stage in reality.

What is a Montage? 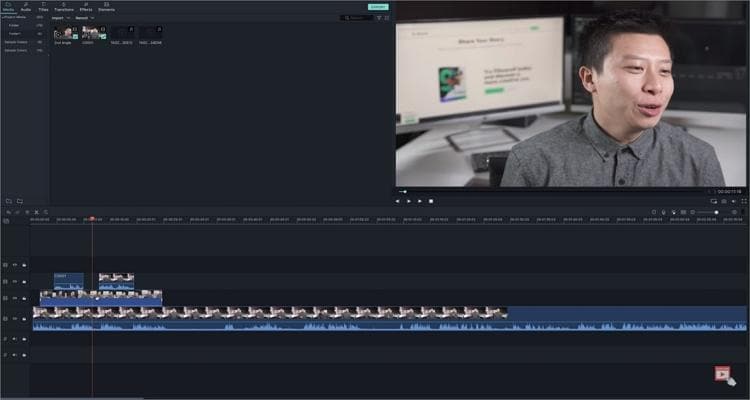 To cut it in the filmmaking industry, you must properly cut, edit, and rearranged clips to form one beautiful story. With that in mind, a montage in film editing is a series of different clips arreanged together to create a continuous sequence before editing. A montage allows the filmmaker to communicate a lot of information to the audience over a short duration.

What is a continuity editing technique? 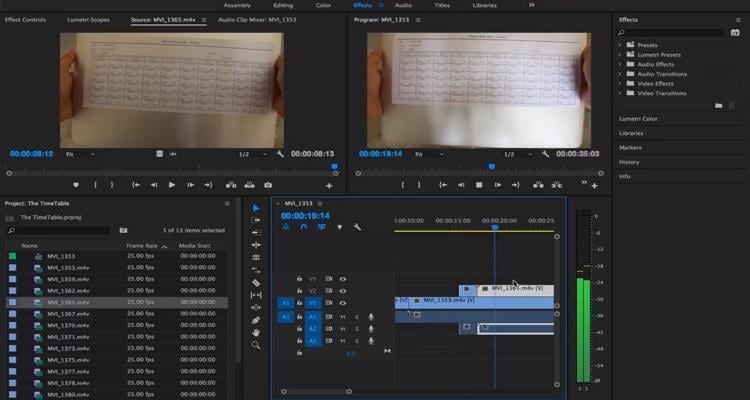 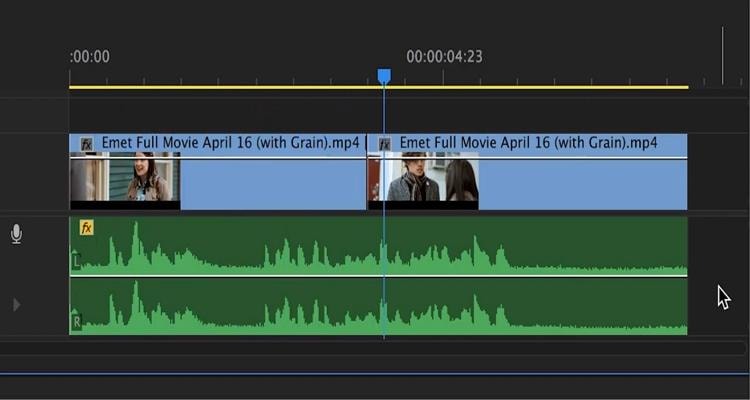 J and L cuts are two standard video editing terms. Generally, both terms refer to audio and video transition from one video scene to another. That said, a J-cut refers to when the audio for the next scene is audible before the actual footage plays. It prepares the audience for what's about to happen in the next movie scene. On the other hand, the L-cut is when the audio of the first scene continues to play underneath the following movie scene.

What is a rough cut in editing? 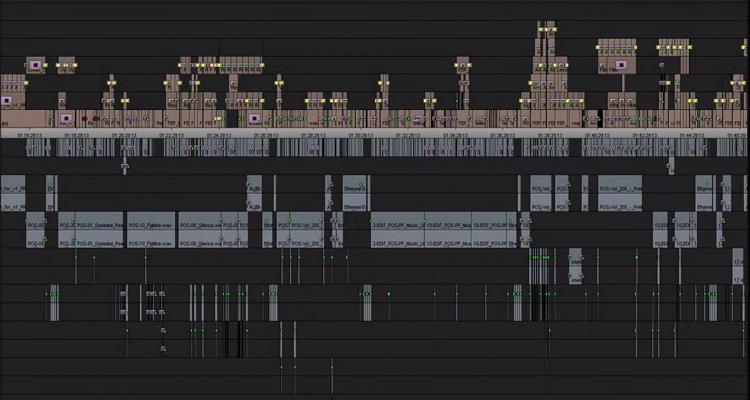 Sometimes called assembly cut or rough edit, a rough cut in movie editing and creation is basically the first retouched version on the clip. In this technique, all the primary details of the video have been assembled sequentially but may lack finer details to make it a complete movie. The film continues to be edited at the editor's discretion. In fact, some situations during rough-cut editing may dictate that more footage need to be shot.

Over 3,591,664 people have downloaded it to try the advanced features.

Q1: What editing software do most filmmakers use?

Honestly, it depends on the filmmaker's needs. But that aside, Avid Media Composer and Adobe Premiere Pro are the industry-standard film and video editor software. Another popular video editing software in Hollywood is Final Cut Pro for macOS, with Adobe Photoshop doing most still work.

Q2: What movie editing software do YouTubers use?

To edit videos for YouTube, you don't need big and intimidating software like those mentioned above. That's because you only need a film editor app that can perform basic functions like trimming, compressing, converting, adding subtitles, applying watermarks, etc. So, use UniConverter to enjoy these features and more.

Q3: What movie editor do professionals use?

Unquestionably, Adobe Premiere Pro and Final Cut Pro are the most popular video editing software among most professionals. However, things are changing fast, and other apps like Lightworks, Filmora9, and Blender rival these apps in most aspects. What's more, iMovie for Apple devices will get the job done efficiently without even paying a dime.

No, Windows Movie Maker was officially discontinued in 2017 after serving its purpose on older versions. But if you're keen enough, you'll realize that the Windows Photos app comes with all the basic editing features you may need. After uploading a video here, you can edit it by trimming and adding slo-mo and fast motion effects by merely dragging the slider. Not only that, but Windows Photos can also customize your video with drawings, texts, confetti, and more. All in all, it's an excellent hidden free app to use.

That must have been fun, right? To create an eye-catching video, you need to do more than just trimming, flipping, cropping, and perform other everyday video editing tasks. But after reading up to this point, I'm sure you are now ready to take your filmmaking skills to a whole new level. Happy for you!