According to statistics, the average person in this generation spends the most time with their mobile devices. As a result of its open-source market, Android devices have successfully stolen the headlines in the smartphone industry. Yearly, several brands of Android devices flood the smartphone market, and they are often easier to operate with unlimited access to millions of mobile apps. While making use of an Android device, the need might arise where a particular video gotten from a different source might be unable to play on your device, at times like this, one can use the services of a video converter for Android. Since the Android app store is an open-source market, there are several applications or some video converters for Android on Android app websites. Some of these apps may not be as effective as they claim to be from their descriptions or view based on a simple search.

The best video converter for Android is not a mobile app itself, but a program that works on both Windows and Mac computers, it is none other than Wondershare UniConverter. This program is the best converter for any video type with more than a thousand supported video formats, and it has set a benchmark difficult to break by most of the available programs out in the software market. It is not just a software program used for video conversion alone, but it comes with a ton of other interesting features. Wondershare UniConverter can serve as minimal video editing software being able to crop videos, add filters, add watermarks, subtitles and perform simple editing like contrast, brightness, and saturation. It can be used to burn files onto a DVD and also edit files on a DVD, download videos from over 10,000 online streaming websites, including converting the videos to MP3 or downloading an entire playlist just to mention a few of its impressive functions. This video converter for Android also comes with an inbuilt media toolbox with features such as fixing metadata of video files, converting videos to VR formats for VR devices, it has the ability cast videos unto a TV screen, it can perform the recording of screen activities, convert DVD files to ISO or even make GIF from video or photo files.

Steps to Convert and Transfer Videos to Android with Wondershare UniConverter:

You need to download Wondershare UniConverter from the Wondershare official website, then install it on your personal computer. Launch the program on your PC, and you'll come to the Video Converter interface, click on the

button, an explorer window will pop up for you to select the videos you want to convert to Android device.

At the top-right corner of the screen, click on the drop-down icon next to the Output Format: button, a drop-down list with different formats each classified under its respective category would pop up. Click on the Device category tab, select the Android General option or another phone brand it offers. Once the desired format has been chosen, the format can be seen on the main screen under the videos to be converted. 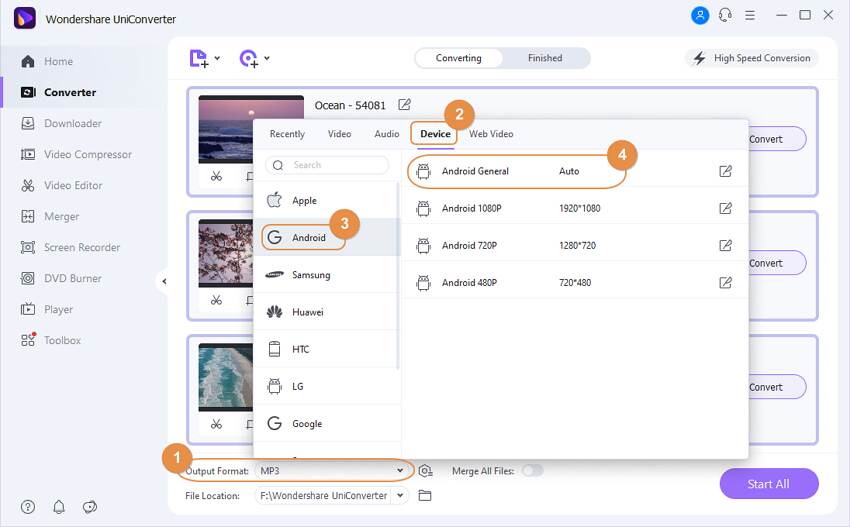 Once all parameters have been set and selected, you can click on the Start All button at the bottom-right corner of the screen. Immediately, the software would begin to convert all videos into a format suitable for your Android device. After your videos have been converted successfully, you can go to the Finished tab and find them here. 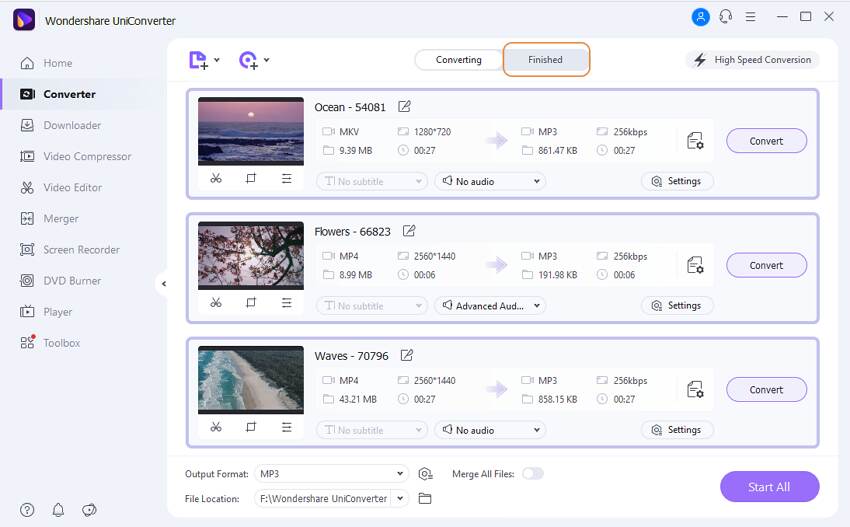 Connect your Android device to your PC/Mac via a USB cable, then go to the Toolbox tab and choose the Transfer section, you can see the

option to add your videos to android 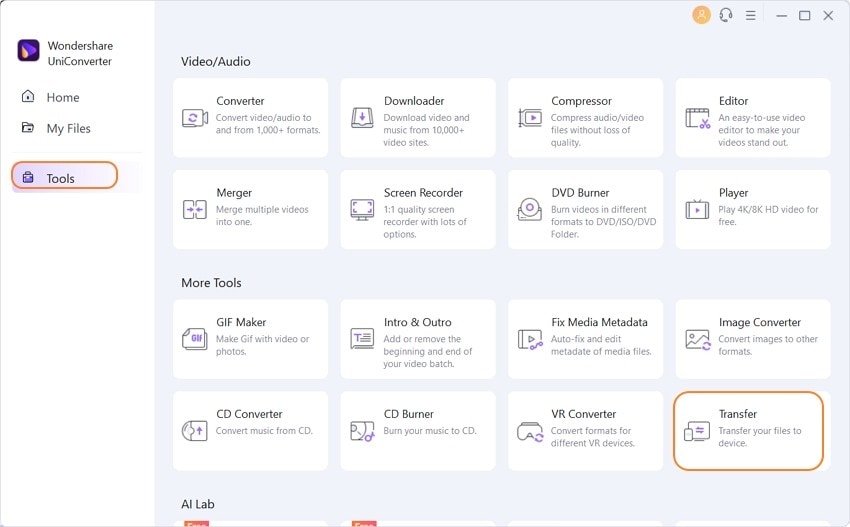 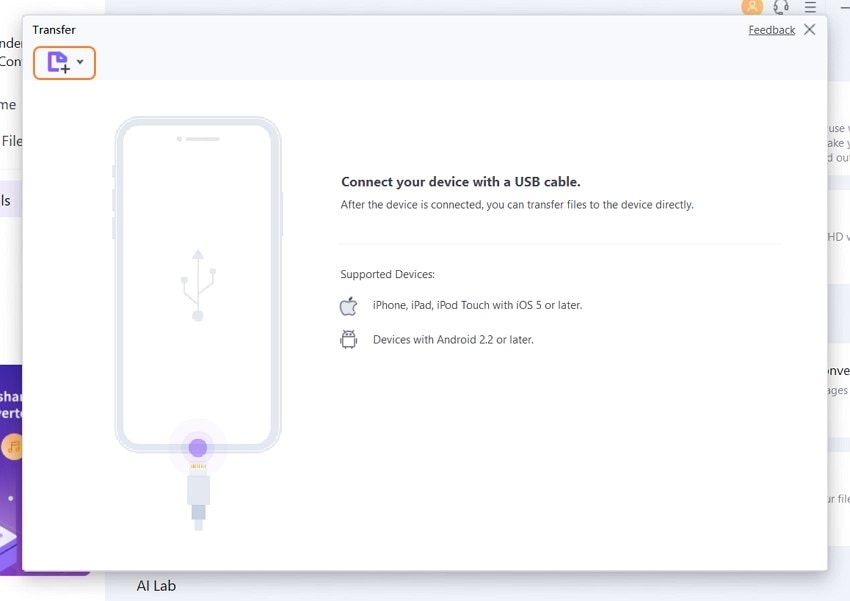 Then you'll find your added videos under the Transfer tab, and click the Transfer All button to transfer the converted files to your Android phone. 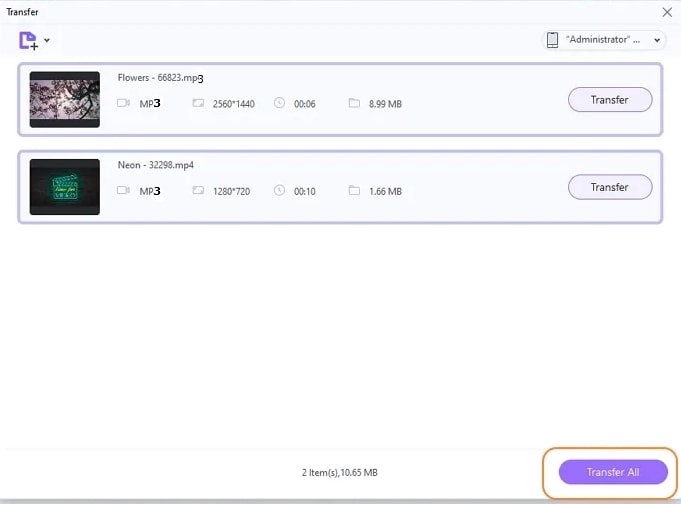 If you are an iPhone / iPad user and want to know how to convert video to ios devices, Just move to How to Convert Videos for iPhone / iPad >> to learn more.

Want to convert a video on your Android device online? Here we've put together a list of the best online video converters for Android that'll help you quickly convert video files from one format to the other.

Online-Convert is a feature-rich online converter that supports a wide variety of video formats. The tool is specifically tailored to help users instantly convert videos from different formats to an Android-compatible format. One of the most exciting features of Online-Convert is that you can also directly upload a file from a cloud-storage service like Google Drive or Dropbox.

It means that it isn't necessary to keep the file in your device's local storage. In addition to this, Online-Convert also offers a dedicated editing panel where you perform minor tweaking before converting the video. Some of the editing options include cutting the video, changing its preset, and disabling the audio track. 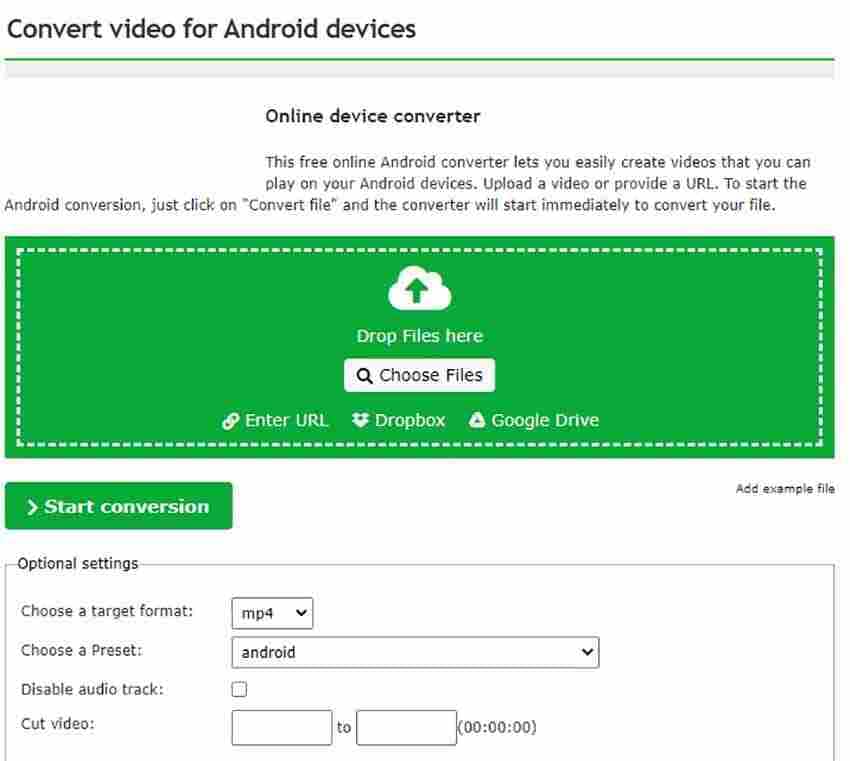 Online Converter is the best video converter for Android 2020, especially if you're looking for a quick and easy way to convert videos to an Android-compatible format. With Online Converter, you can either add the video by pasting its URL or directly upload a video from your Android device. The tool supports a wide range of video formats, which means you can convert any video without any hassle. 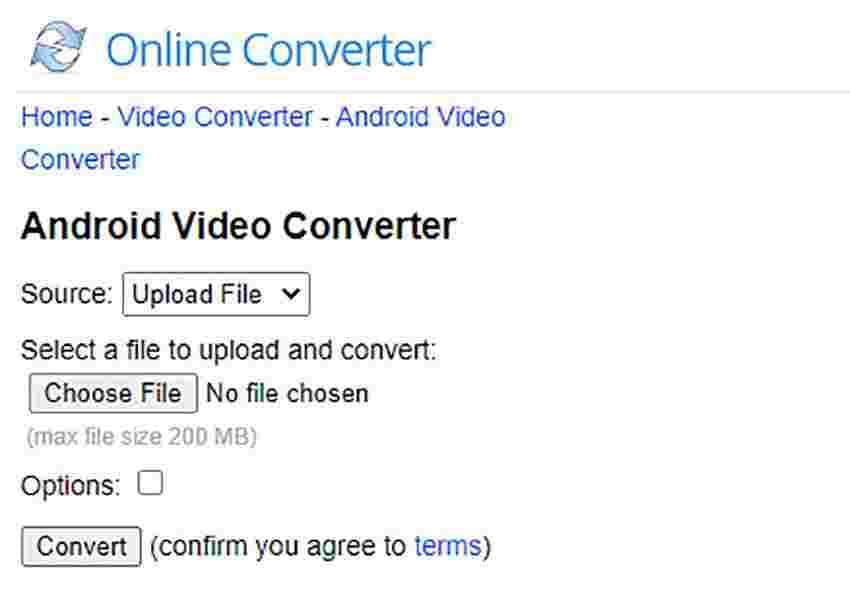 Free Convert is yet another online video converter for Android. Like any other online converter, Free Convert lets you quickly upload video files to the server and instantly convert them to the desired format. However, with Free Convert, you also have the option of batch conversion.

It means you can upload multiple files at once and convert them for your Android smartphone with one click. This is a suitable tool for people who want to convert multiple videos but don't have the time to convert each clip individually. If that's the case, simply upload all the files and click "Convert" to convert them instantly.

Video converter app on Android device developed by aKingi Org takes your Android device and makes it a full-fledged multimedia converter. This app was developed with a simple yet classy user interface that allows users to perform video conversion in just two easy and straightforward steps; selection of video files and choosing an output format. The app was equipped with a few advanced modes of conversion, such as changing of output parameters like the audio bitrate, video codec, metadata details, etc. During the installation stage, the app recognizes the architecture of the Android on which it is being installed, and it installs the appropriate codec package accordingly. It supports a wide range of both audio and video multimedia formats, including 3GP, AAC, AC3, AVI, FLAC, MP2, MP3, MP4, MPG, MKV, MOV, OGG, WAV, WEBM, WMA, WMV amongst others. It also comes with an inbuilt video player for better video playing experience. 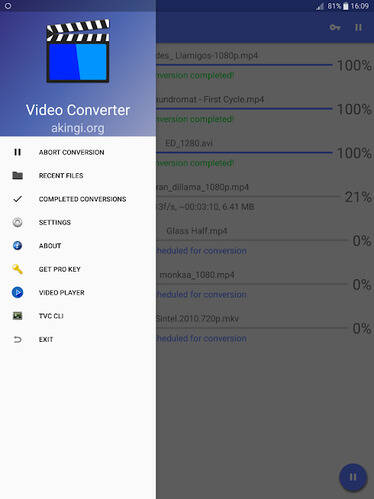 VidConvert is an impressive video converter for Android that was developed by Acro Media Studio and has been a name to reckon with amongst its peers of video converters for Android. The app is quite impressive with a user-friendly and easy to understand User interface. VidConvert offers the conversion for a common range of video formats accessible on most Android mobile devices, which includes MP4, FLV, MOV, MKV, AVI, WMV, RMVB, and so on. It was equipped with a function that can extract audio from a video file and provide it in an MP3 format. The app can also reduce a video size using its easy trim process. It features a quick share button to share converted videos with a single click while supporting a background conversion process. 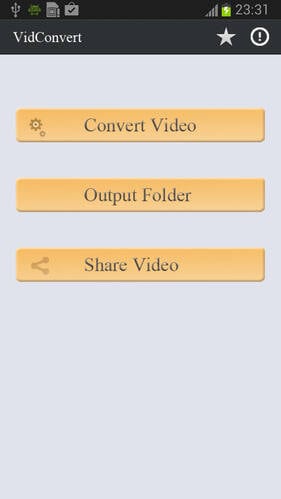 This particular video converter for Android developed by Roman10 is one of the top video converters in the Android play store with 10 million downloads and getting a 4.0 rating from about 58, 000 reviews. The converter can convert almost any type of video file to other video formats. It scans a device for all available video files on the Android device, displaying both the audio and video information of the file so users can easily select and convert videos. It can be used to extract audio from video files as well as saving the audio file in either MP3 or AAC formats without reducing the quality of the file. While converting videos with this app, you might decide to reduce the video file size, and its advanced mode allows for the specification of output resolution, codec, video bitrate. Its supported video formats include but are not limited to ASF, AVI, DIVX, FLV, M2V, M4V, MJPEG, MKV, MOV, MPG, OGG, OGV, RM, RMVB, WebM, WMV, DV4 and many more. 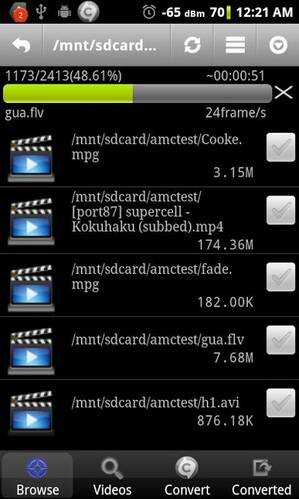 This video converter is an absolutely free video converter for Android, which also works as a completely offline or online tool. The conversion process in this app is a three-step process which includes; selecting the video file to be converted or simply click on the "Add from Album" button to choose a video from a video album, and you are then prompted to set the output video format including advanced specifications like the bitrate, resolution, aspect ratio, size and frame rate; and finally clicking the "convert now" button to convert the selected file. One of the most impressive features of this device is the ability to extract an aspect of a video or to merge different videos as one. It features an online conversion feature that does not occupy the mental storage of your mobile device. Additionally, this app also permits the cropping out of an unwanted aspect of a video with its crop tool. 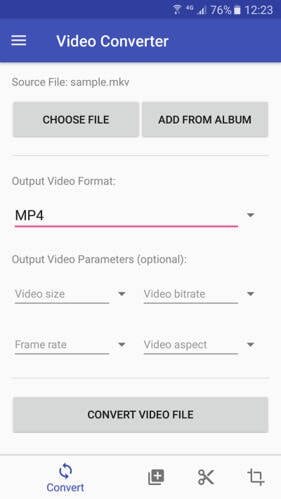 Video format factory is an Android converter for Android developed by Keeby, which has been available for free download on the Google play store. It has been downloaded over a million times from the play store and received a 4.1 rating from over 45,000 user reviews. This Android application supports all major video formats ranging from the common ones like MP4, FLV, AVI, MKV, MP3, FLAC, WMA, OGG, M4A, WAV to the rare formats. The app maintains video quality while performing a video conversion, and it makes use of the FFMPEG application for its encoding process. Alternatively, it can also be used as a tool to compress video files to save space on your Android device. With this app, you can trim, crop, split, reverse video like a playback, create GIF from a video file or even remove watermarks from videos. It also features a simple share button. 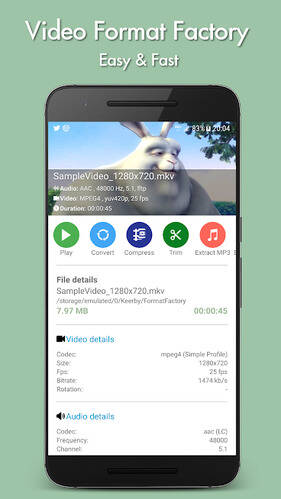 Vidcompact was created by the combined effort of both EnjoyMobi Video Editor and Video Maker Studio. The app has an impressive 4.5 rating from over 119, 000 reviews and over 5 million downloads. Vidcompact is a completely free video converter for Android with a wide range of video formats for conversion. The app can compress video files and still keep its quality. It can also cut, trim, and reduce video clips with the ability to change the audio frequency of the video files. Vidcompact can also serve as a tool to extract audio from video files or convert videos to audios. 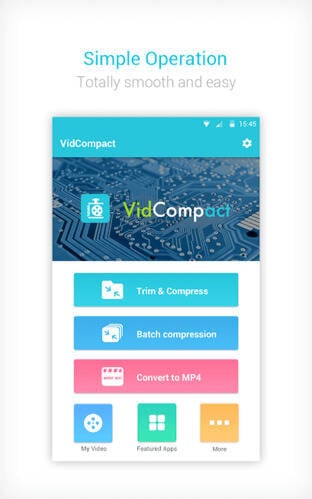 There are many video converters for Android; however, only a few of those deliver their services well enough. Hence, our vote for the best video converter for Android in 2020 still goes to the Wondershare UniConverter, due to its additional available exciting features.