The PlayStation 3 (PS3) is a home video game console, which is invented by Sony Computer Entertainment. It is the successor to PlayStation 2, as part of the PlayStation series. The first time it was released on November 11, 2006, in Japan. PS3 is much more than a simple gaming console. Among all other things, the PS3 enables you to watch movies and videos in different file formats. PS3 design for video games containing high-performance graphic hardware allows you to play your video files including 3D videos. You just need a 3D supported TV and glasses.

The answer to this question is yes and no. It depends on the MP4 detailed format. We have tried to choose the most authentic reason for not supporting MP4 files on PS3. According to the Play station support website, PS3 is only supporting that MP4 files, which are fixed with /MPEG-4 AVC high profile (AAC LC). While on the other hand, MP4 is a container video design which is containing audio codecs or a variety of videos. If the MP4 video is not programmed with PS3 attuned codec, then it is the case we will fall short of streaming MP4 to PS3, or we will not be able to play MP4 files on PS3 even if MP4 is effectively shifted to PS3.

PS3 officially supports the MP4 file, but we can still see many cases where users cannot play their MP4 files.

Here are some common questions asked by different users:

Q2: Why I haven't been able to get my PS3 to recognize or play any video files from an external source?

Q3: What kind of video does the PS3 support? I'm getting quite frustrated.

The answers to all these questions are:

PS3 can play MP4 video files, but they have strict requirements for this kind of format. The video should encode with the codec of MPEG-4 AVC /Xvid/DivX and AAC codec.

As we know, there are still some other MP4 videos codec, which can be used in encoding video, such files are unsupported by PS3 like MPEG-4 ASP.

The extension of both files would be the same as” .mp4,” but both encoded with different methods.

So as by default, PS3 plays MP4 files but only with the codec MPEG-4 AVC /Xvid/DivX and audio codec of AAC. Other MP4 video files are unsupported like MPEG-4 ASP.

If you are stuck with unsupported “.MP4” files (like MPEG-4 ASP encoded) playing with your PS3. The best solution is that you should convert your existing file into PS3 proper MP4 files.

There are various software packages for converting videos. But hare we use Wondershare UniConverter (originally Wondershare Video Converter Ultimate) as a PS3 HD video converter. Wondershare UniConverter (originally Wondershare Video Converter Ultimate) is really fast and easy to use for converting your videos. It also includes various pre-defined format settings for Games, web, mobile, and portable devices, which assist you in converting your requited video directly instead of using a manual setting for a specific device like PS3, PS4, Xbox or PSP. Each device and platform have its own specific codec, which is difficult to remember.

Steps on How to Convert MP4 to PS3:

Step 1 Adding MP4 files to the MP4 to PS3 converter.

to browse and import the MP4 files you want to play on PS3.

Click the drop-down icon beside Output Format:, select Device > Games >PS3. Also, you can build a customized output format by clicking Create to set special encoder, framerate, bitrate, etc. Besides, you can edit the video by clicking one of the editing icons under the video thumbnail. 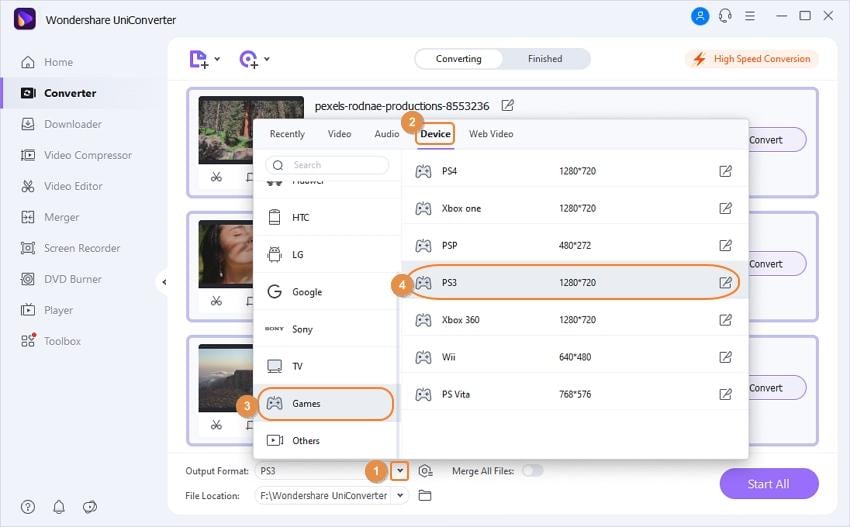 After selecting your output format, now just click on Start All button. By clicking the Output icon, you will find the output files which can be compatible with the PS3 console. You can simply transfer them to the PS3 console by USB directly. Learn more about how to transfer videos to MP3 >. 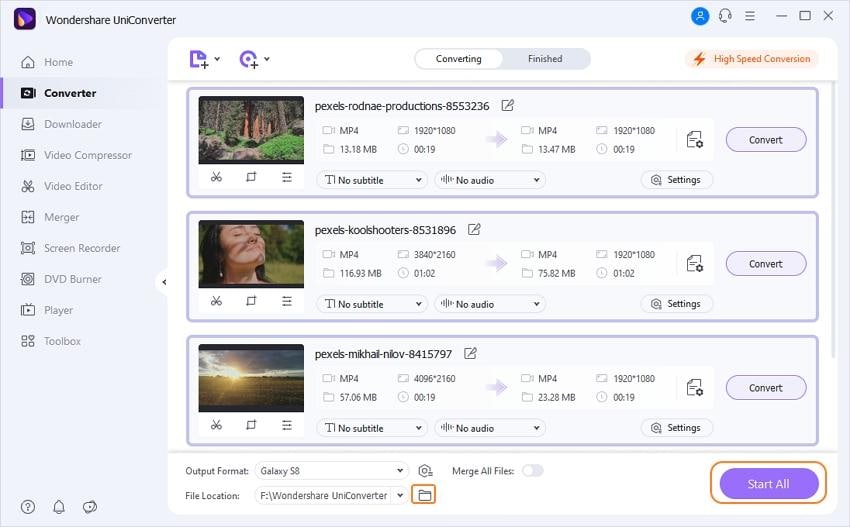