What is The Best TRP Converter in 2021

If you are in the profession of digital media, you would have definitely stumbled upon a situation where you had to deal with a TRP file, be it converting a TRP video to a different format, or be it the other way around. In either case, having an efficient TRP converter is a must.

Depending on the years of experience you have, you might be already using a TRP file converter that you may have been suggested by your senior or have found one on your own as the result of extensive online searches.

Apologies for bursting the bubble, but here you will learn about some of the best known TRP video converter programs that may be different than what you have been already using all along.

Part 1. What is the TRP format

TRP is a container extension that holds both audio and video information. While the audio the TRP file has is encoded with A3C, the visual is of MPEG-2 format. Once packed in the main container, i.e., TRP, the video then uses the digital transportation protocol to broadcast the audio-visual signals over long distances. The noteworthy thing is, TRP offers DVD quality pictures and sounds to the viewers.

Part 2. How to choose a TRP converter

Although you might meet many people who would suggest any random TRP file converter software according to its price and availability, you must consider a couple of important points before deciding which application to pick and use in the long run.

Things that you must keep in mind while selecting a TRP file converter include:

Since you are dealing with TRP at the moment, you must check how many formats does your converter support and is it able to convert the files both ways, i.e., from TRP to a different format and vice versa. The more extensions the application can recognize the better.

It is also important to see how long does it take to convert the files. Some tools might support a huge number of formats but are extremely slow, whereas there could be others that may be fast but don’t recognize a lot of file extensions. An ideal TRP video converter must have a well-balanced blend of both.

In the absence of any editing options, a TRP converter would not give you the best output. While allowing only the conversions would make the application lightweight, the editing tools will help you decorate the videos to make them more engaging.

Even though a TRP file converter is expected to do only what the name says, wouldn’t it be better if the program has a few more features to make your post-production tasks easier? For instance, if a tool can compress and merge the videos as well before converting, you don’t have to look out for any other software to do these simple but important things.

All in all, the best TRP converter is expected to cover all the above-discussed spectrums to make your conversion process convenient.

Considering all the points discussed in Part 2, one app that precisely fits in is UniConverter by Wondershare. Wondershare UniConverter (originally Wondershare Video Converter Ultimate) is available for both Mac and Windows PC, supports more than 1000 formats, and can convert the files to their relevant formats at 30x faster speed.

The steps given below can be followed to use Wondershare UniConverter as an efficient TRP converter:

Note: You must download the TRP converter (Wondershare UniConverter here) before you can start converting the files.

Launch Wondershare UniConverter. While staying on the Video Converter category, click Add Files, and import the source TRP file that you want to convert to a different format. 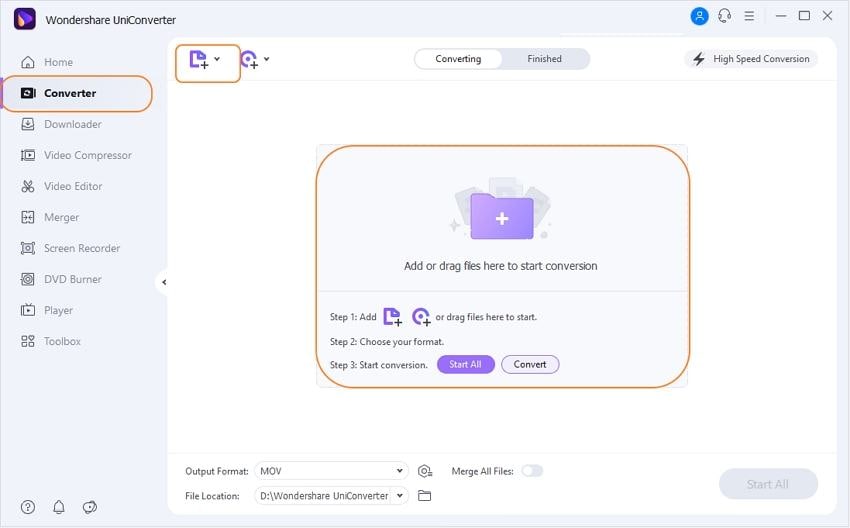 Click the Output Format menu from the lower section of the window, go to the Video tab, choose your preferred format from the left list, and pick a quality preset from the right pane. 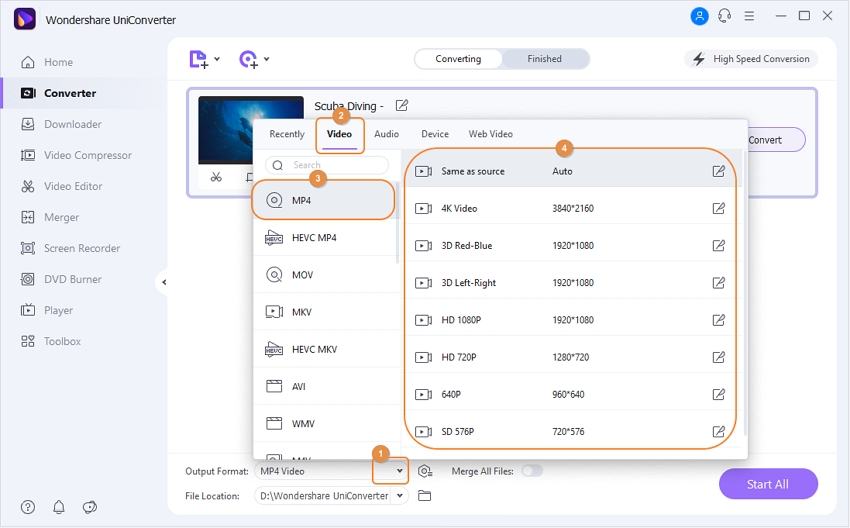 Use the File Location field to define a destination directory, and click Convert from the right side of the imported file. Wait while the conversion process completes before going to the next step. 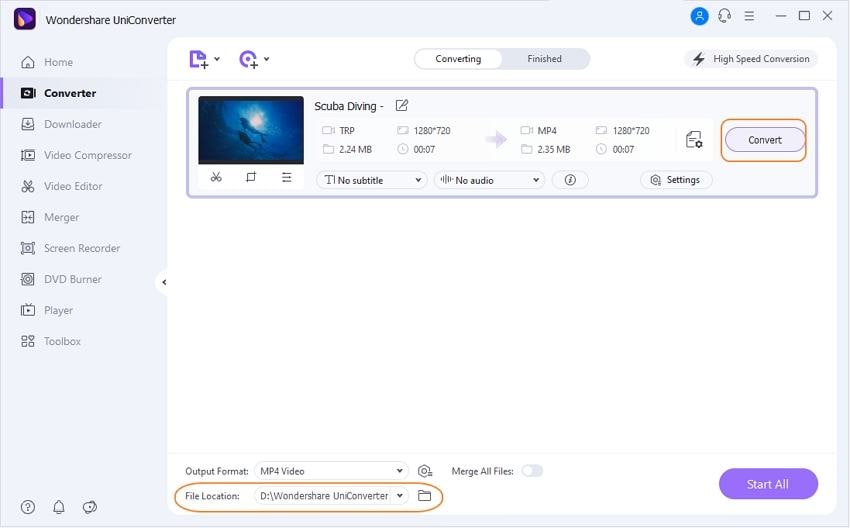 Click the Finished tab from the top to go to the next window, and click Open from the right of the converted file to open the target folder. 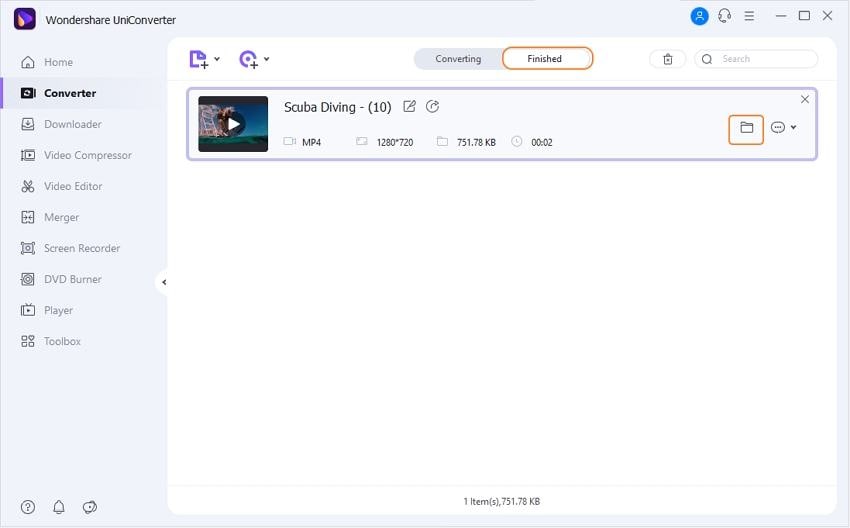 In case you want to try your hands with some other TRP converter software before settling down with one of your choices, some most popular TRP file converter programs are listed below for your reference:

Developed by WonderFox, this application supports over 500 formats for conversion. The software even has a built-in ringtone creator that could be a great attraction for the millennials. Furthermore, the app can record your computer screen and sounds from a microphone to prepare your own videos for personal viewing and/or commercial gains.

● Lets you trim, merge, add effects and filters, etc. to your videos

● Supports hardware acceleration during conversion to expedite the process

● Comes with a price tag 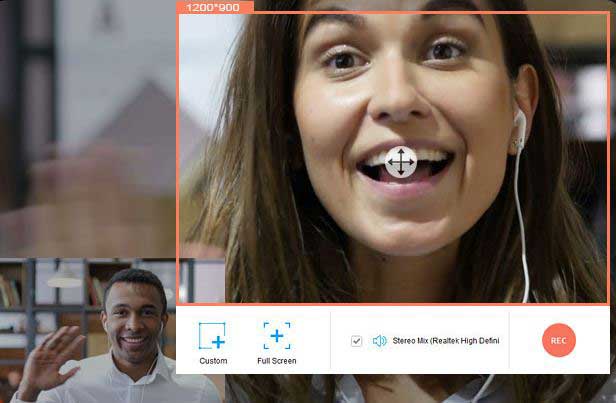 This TRP file converter is available for both Mac and Windows platforms. The software can support almost all the major formats for conversion and can even transcode the videos to device-specific resolution or format such as for Apple TV, iPod, etc. In other words, with 4Videosoft TRP Video Converter, you can convert the TRP files to other formats like AVI, MP4, MKV, etc.

● Has built-in video editor to add effects, trim the clips, crop them, join them, etc.

● Has separate output profiles with pre-defined presets and configurations

● Can convert the TRP files to device-specific resolution or format

● Converts at 6x fast speed as compared to other programs 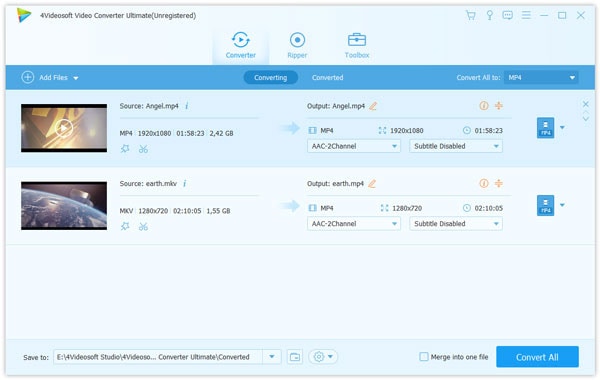 Developed by another IT giant NCH Software, Prism Video Converter Software is a TRP converter that is available for Windows and Mac computers and works on the x64 variants of the operating systems. While the tool supports Windows XP and above versions for Microsoft platform, for Mac, it requires OS X 10.5 or above to function. 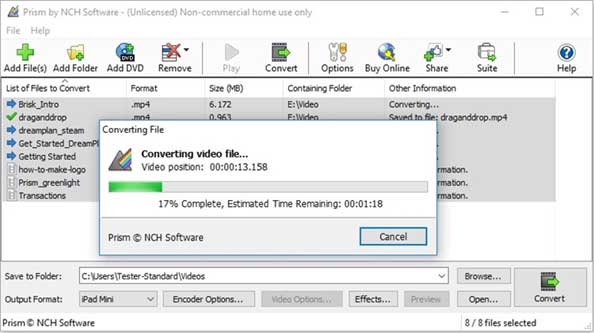 This TRP file converter is available for Mac and Microsoft platforms where the former variant supports Mac OS X 10.7 or above. The latter can be installed on Windows XP or later operating systems. The application can convert the source TRP files to any of the commonly used formats or can directly send those videos to your preferred iOS device as needed.

● Can convert files around 30x faster 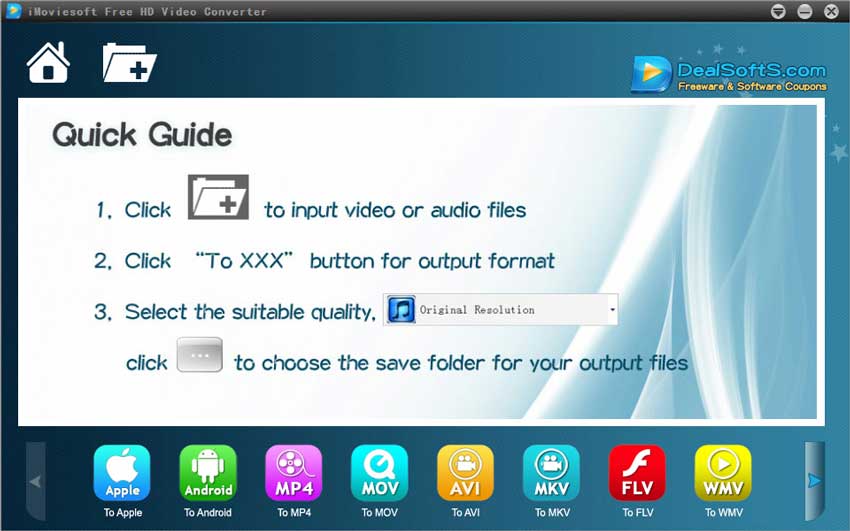 This TRP converter software supports SD, HD, and 4K resolutions and even enables you to adjust the video effects to make your clips more engaging. The tool can be installed on Windows 7, Windows 8, Windows 8.1, and Windows 10 with a minimum of 1GB RAM and 1GHz processor from Intel or AMD.

● Allows you to edit the videos before conversion

● Allows you to preview the videos

● Enables you to extract audio from video files

● Screen recording tool must be bought as a separate program 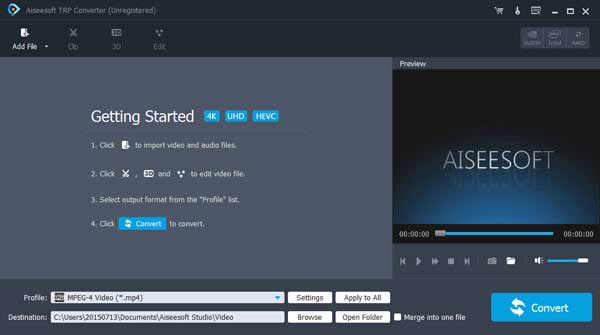 Although all the TRP converter programs discussed above are good in their own way, the one that covers the entire range of criteria listed in Part 2 is Wondershare UniConverter. In addition to being available for both Mac and Windows, the application also has a built-in screen recording category that is equipped with the screencasting tool, webcam capturer, and voiceover recorder, thus making the entire software a full-fledged production and post-production app for the professionals and beginners.