Held every four years, the Olympic Games is widely considered the world's most popular sports competition. That's because more than 200 nations participate in hundreds of events. This summer, athletes from all over the world will gather in Japan to participate in the Summer Olympics 2021. So, this article features everything you need to know about the 2021 Tokyo Olympics. You'll also learn the best game screen recorder to help you record the best moments of the 2021 Summer Games.

01 2021 Tokyo Olympics: The schedule you must not miss
02 How to capture exciting and spectacular moments of sporting events?
03 Quickest way to convert your recorded video of the Olympic Games to MP4 or other formats
04 Final words

Part 1. 2021 Tokyo Olympics: The schedule you must not miss

*What are the Tokyo Olympics dates? 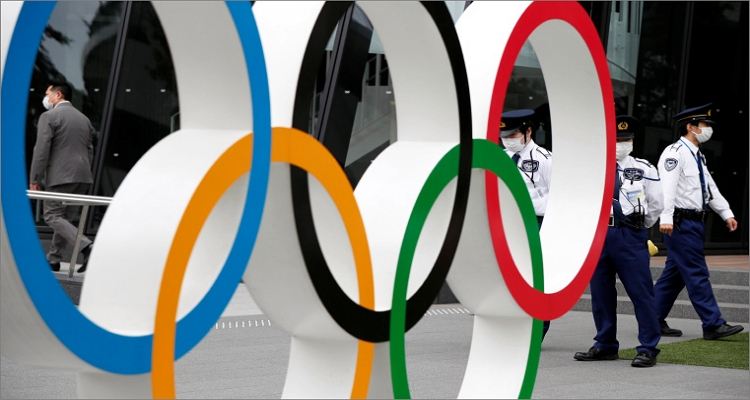 Inevitably, all good things have an ending. So, the Tokyo 2021 Olympics closing ceremony will happen on August 8 at 7.am. EDT.

*Where to watch the 2021 Tokyo Olympic Games? 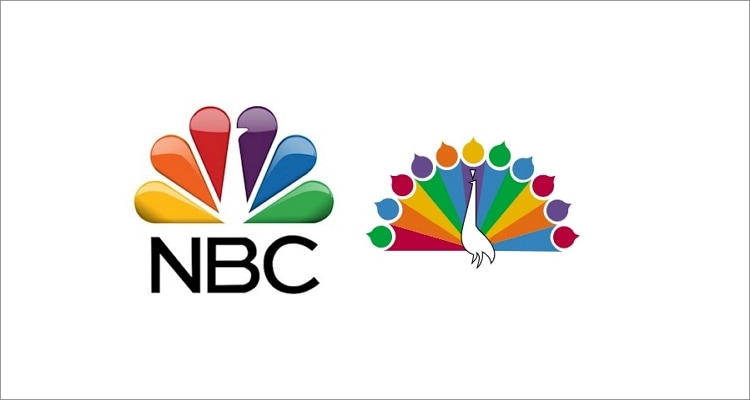 For a long time, NBC has been known as home to the Olympics. And that's not any different this time as the company will be offering primetime coverage of the event at 8 p.m. EDT or 5 p.m. PDT. Therefore, tune in to NBC station wherever you are and catch up with the big event.

On top of NBC, fans can also watch the Summer Olympic Games on Peacock – NBC's streaming service. There are also NBC Sports and NBCOlympics.com. And, of course, paid TV channels like YouTube TV, Sling TV, and Hulu will be covering the sports event as well. Interestingly, Peacock viewers will be able to stream the Tokyo Olympics for free. Here, you'll find live coverage, curated highlights, and event replays.

*How many sports will be at the Summer Tokyo Olympics? 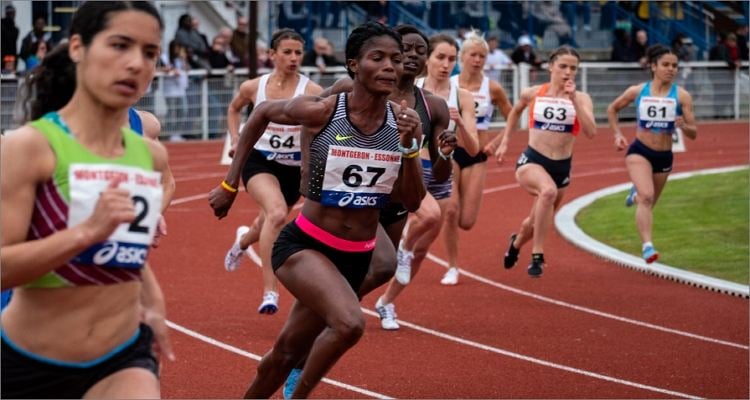 For any sport to be part of the Olympics, the event must get a green light from the IOC (International Olympic Committee). Also, the sport should be practiced in four continents and at least 75 countries to be officially recognized. That said, teams will be competing in 33 sports divided into 339 events.

Also, the event will see the addition of four brand-new games, with two discontinued sports making a comeback. The new sports include karate, sport climbing, surfing, and skateboarding. On the other side, softball and baseball will make a return to the Olympic Games.

*Will spectators be allowed at the 2021 Tokyo Olympics? 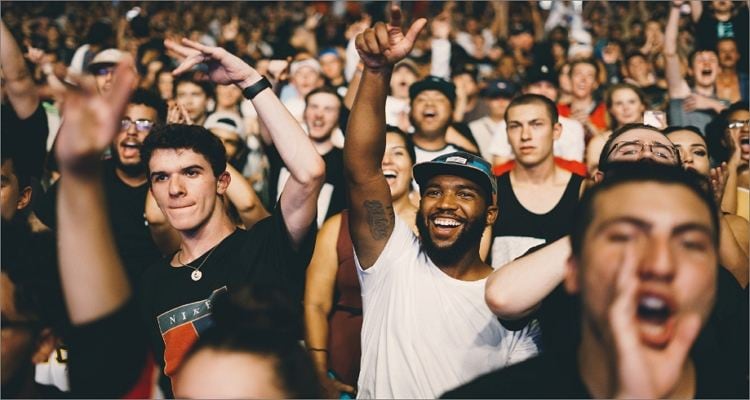 Unfortunately, the Summer Olympics 2021 will have no spectators following a unanimous decision from the IOC members, Tamayo Marukawa (Olympics Minister), and local organizers. Before this, international fans were already barred from attending the event due to the rising COVID-19 infections in Japan, especially in Tokyo.

As of now, the country has registered more than 810,000 cases with more than 14,900 deaths. To make it worse, just 15% of the country's population have received the COVID-19 jab, according to AP. While these numbers are nothing compared to what you'll see in other developed nations like the US and UK, it's still worth taking the necessary precautions.

*What to do to watch Tokyo Olympics 2021 in your country? 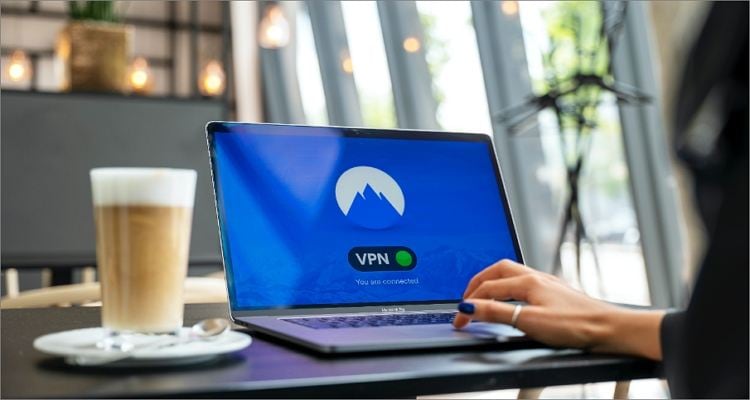 Sadly, some Olympics fans won't get a glimpse of this year's event due to restrictions and lack of NBC services. But there is a way out. You can watch the Summer Olympics for free using a VPN service. Using this technology on your computer or mobile device allows you to watch live broadcasts in Australia, Canada, the US, and the UK. For example, you can use VPN to live stream the Olympic Games in Canada's CBC.

Part 2. How to capture exciting and spectacular moments of sporting events?

Let's begin with the most straightforward and most powerful sports video recorder for macOS and Windows computers – Wondershare UniConverter. This desktop utility program is easy to use and allows Tokyo Olympics home spectators to record the event with lossless quality. Just choose a capture area on your computer screen, set the recording settings, and start recording the event. After recording the screen, UniConverter lets you edit it by trimming, splitting, cropping, applying watermarks, and so much more. Plus, users can save their special Olympics moments on a DVD or Blu-ray disc. 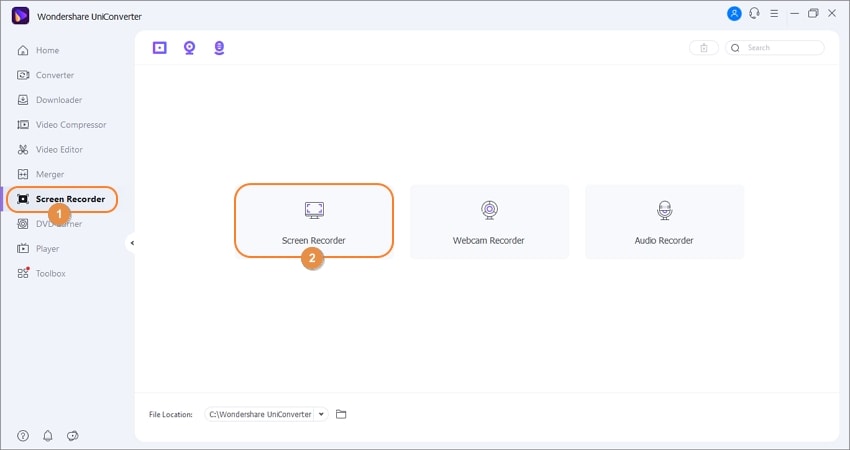 Step 2 Launch the computer screen and set a capture area.

Next, open the browser tab or app that you'll be streaming the Olympic Games on and then resize the cropper to set the perfect capture area. If you want to record a precise video frame, choose the Custom mode and then enter the frame dimensions. And don't forget to click the Lock Aspect Ratio to create a natural-looking video highlight. 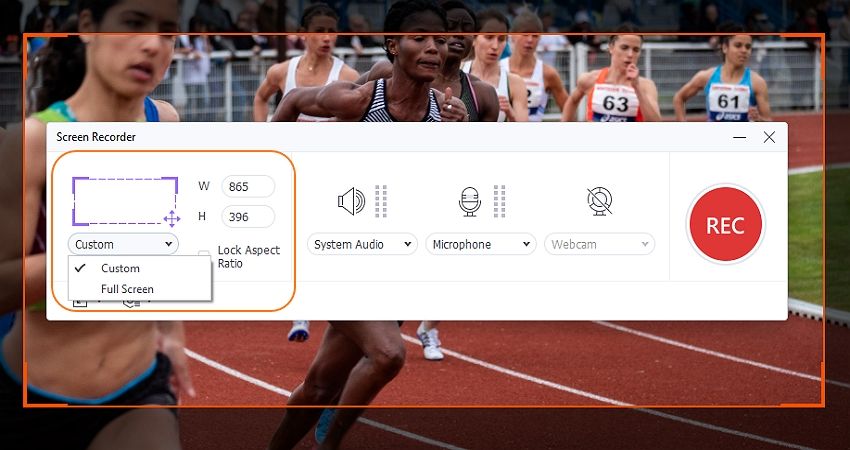 Sometimes, you may want to add one or two features to your Olympics video highlight. Fortunately, UniConverter allows you to record with system sounds like mouse clicks and keyboard sounds by choosing a device on System Audio. You can also apply a voice narration using a sound input device on Microphone and PiP effect by selecting s device on Webcam. 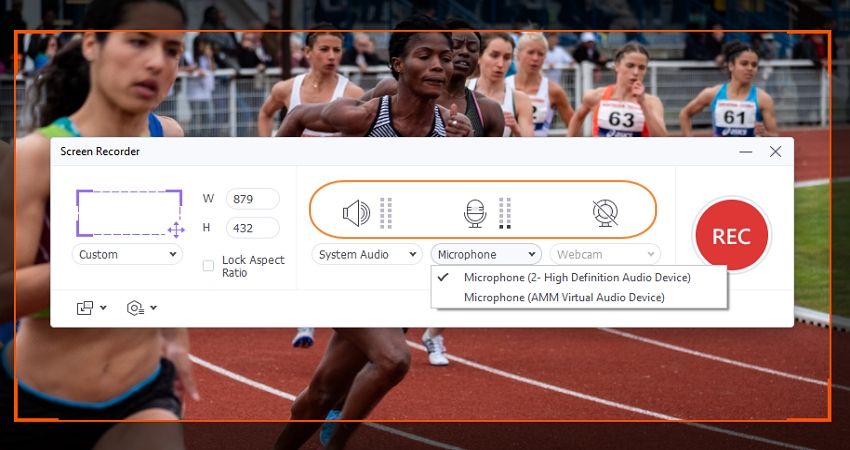 Don't stop yet! Tap the gear icon below the REC button to reveal additional settings. Here, you can set MP4, AVI, or FLV and the video format. You can also choose the output format, frame rate, folder path, and duration. Close the window and move to the final step.

Now preview the crop area and then play the sports game you want to record before pressing REC to capture the event. You'll see a button for adding annotations like shapes, lines, texts, and drawings on the recording toolbar. There are also buttons for taking a screenshot and enabling or disabling recording devices. Finally, click Stop to finish recording the Olympic event. 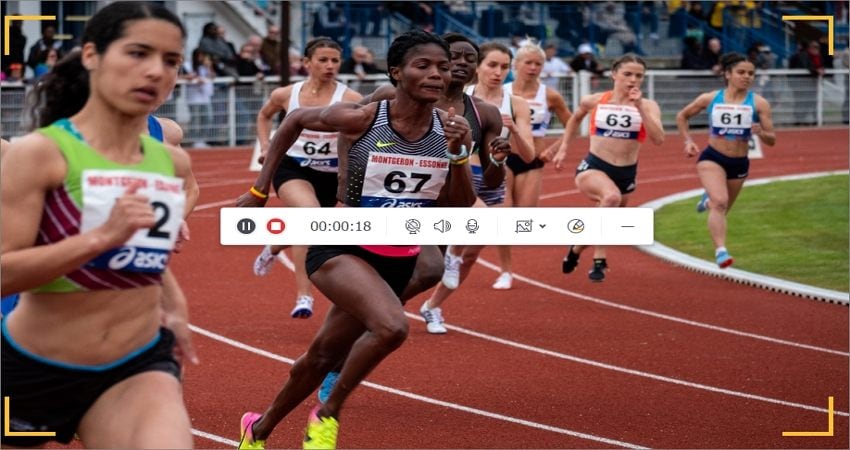 An easy-to-use video editor to make your sports videos stand out.

It allows you to record Olympic Games videos on full screen without any quality loss.

Add or remove image and text watermarks from your videos effortlessly. 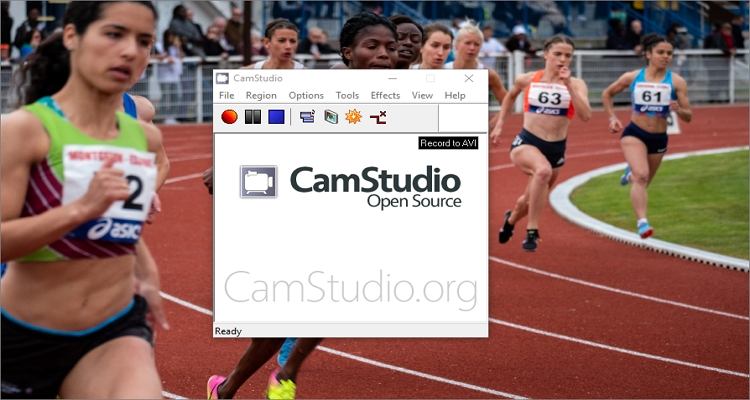 If you're looking for freebies to record the Olympic Games highlights, look at CamStudio. Like UniConverter, this video recorder allows creators to select a specific region to record before customizing it with shapes, texts, and annotations. CamStudio users can also record videos with system audio and microphone narrations. Plus, users can mute the video while recording. But on the flip side, CamStudio can be a bit challenging to use for beginners. Even worse, it lacks essential tools like a PiP recorder and video editor. 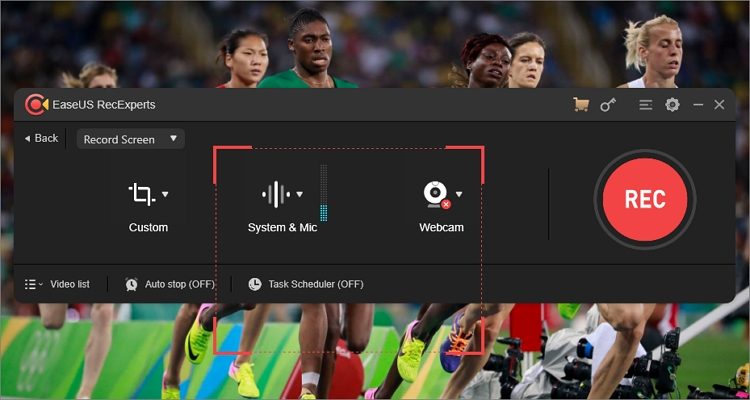 EaseUS RecExperts is another excellent game screen recorder for macOS 10.10+ and Windows 7/8/10. With this affordable video recorder, you'll enjoy a wide variety of features such as 60 fps recording, 4K resolution, and audio capture. Furthermore, it can a particular subset on your screen and easily overlay a webcam and audio. And in addition, EaseUS RecExperts comes with an intuitive video player with basic editing capabilities to trim and watermark videos. After everything, users can directly add videos to Vimeo, YouTube, Google Drive, or Dropbox. 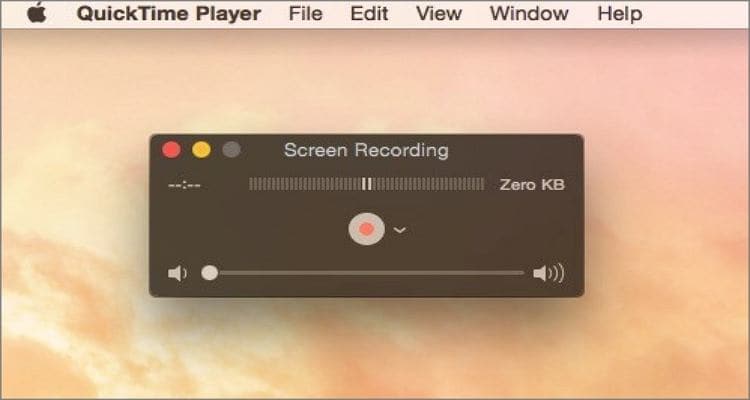 If you're a macOS user, there is no need to look any further than QuickTime Player. Typically, this program comes pre-installed in your MacBook or iMac for opening any movie and audio file of your choice. But you can also use this media player to record an Olympic video highlight with a voice overlay. Like the professional apps on this list, QuickTime Player lets you configure the capture area or capture the entire screen. Simply put, it's the simplest way to record Mac screen activities. 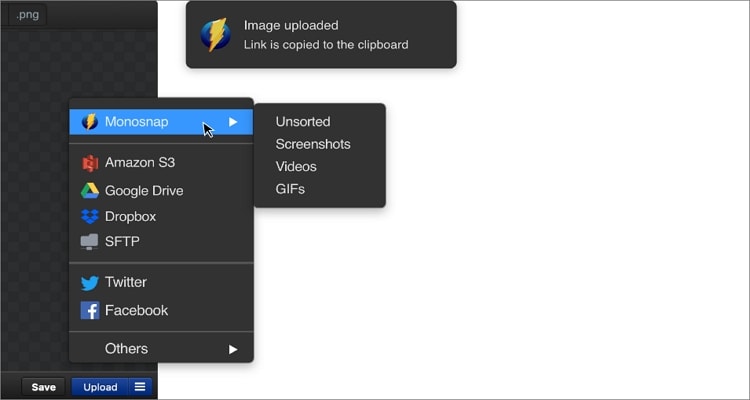 If you plan to take multiple screenshots of your favorite Olympic stars, Monosnap is the tool for you. That's because this Windows/Mac program is intuitive, simple, and fun to use. With it, you can take images and videos with annotations like shapes, texts, and arrows. But that's just the beginning. Monosnap comes with an image editor for rotating, cropping, and annotating screenshots. What's better, MonoSnap users can upload their video and image files to the cloud and continue editing anywhere, anytime.

Part 3. Quickest way to convert your recorded video of the Olympic Games to MP4 or other formats

First and foremost, run UniConverter, then press the Converter tab. Now drag and drop your Olympic Games video file on the workspace or click Add Files to open your local folders and add a video. Note that UniConverter supports batch conversions. 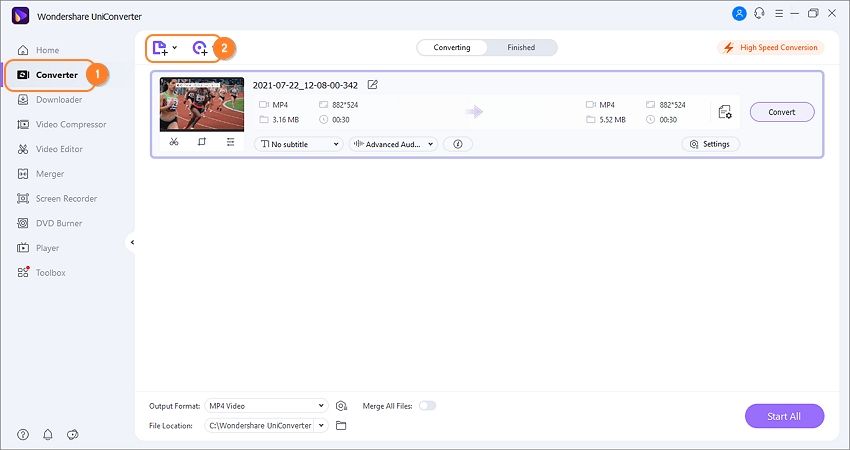 Do you want your video to look more watchable and presentable? Then, click one of the video editing buttons on the video thumbnail. As said initially, you can split, trim, crop, remove background noise, and so on. 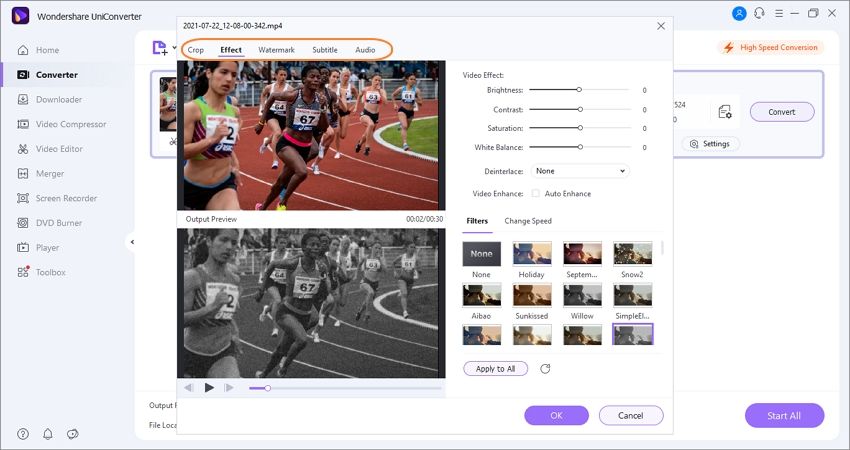 Step 3 Choose a target format for the video.

Last but not least, press the Output Format section at the bottom of the window and choose an appropriate format on the Video tab. You can also select a device-ready format like iPhone, iPad, Samsung, Apple TV, and more on the Device tab. Now finish up by clicking Start All. That's it! 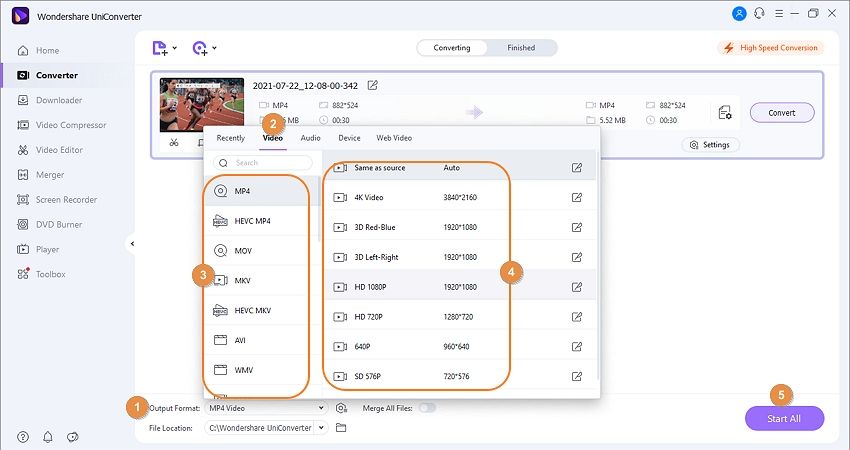 Do you still need any further clarifications regarding the Tokyo Olympics 2021? Hope not! Read the first section of this guide to learn the start and stop dates and where to watch the Olympic Games in Tokyo, Japan. And yes, use Wondershare UniConverter to record memorable moments of the Tokyo Olympics and edit the video professionally. Enjoy the show!