The wait is finally over; the Tokyo Olympics 2021 here. This competition offers sports fans a relaxing opportunity to cheer their national teams as they duke it out against other countries in multiple sporting events. So, to get in the mood for the 2021 Olympics, you can start by playing some entertaining Olympics video games. One such game is the Olympic Games Tokyo 2020 - the Official Video Game. But apart from this addictive video game, which other title do you know? This article lists the top twelve Olympic video games that you should play in the 2021 Summer Olympics.

Let's start by discussing the official Tokyo 2020 Olympics video game - Olympic Games Tokyo 2020 the Official Video Game. Released on June 22, 2021, this game is one of this summer's most entertaining releases and is developed by none other than Sega. You can play this game using PlayStation 4, Xbox One, Nintendo Switch, Stadia, and PCs.

That aside, this Tokyo Olympics video game maintains a fine line between fun-arcade style and realism. That's because it comes with multiple good-looking elements such as realistic facial expressions and more-than-average crowd visuals. In addition, the day/night cycle and strongly recreated venues will give you a strong sense of realism. Generally, the game graphics score highly, depending on the scale you weigh it on.

Meanwhile, The Olympic Games Tokyo 2020 – the Official Video Game comes with its fair share of offerings. It features up to 18 fun-filled arcade-style events to keep you on the edge of your seat. You can travel the distance with game events such as 100m, 110m hurdles, rugby sevens, soccer, 100m freestyle, and so much more.

However, I'm not sure if you'll be thrilled playing the soccer games in this video game. For example, instead of parrying the ball, keepers just let the ball bounce off them. Also, there is no game discipline because of zero bookings. And that's not to mention the omission of debuting events like skateboarding and surfing. But overall, this 2020 Olympics video game performs beyond expectations.

Advanced tips and menus are hidden

If you don't find the official 2020 Olympic video game worth the price and time, you can make a pick from these eleven options instead:

1. Mario & Sonic at the Olympic Games 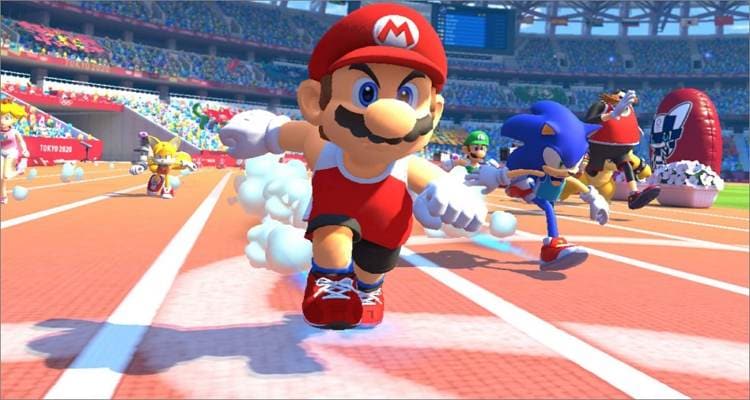 Mario & Sonic at the Olympic Games is another entertaining video game from Sega. The first installment of the game was released in November 2007, becoming the 2008 Summer Olympic Games' official video game. Quickly moving forward, you can play the first installment of the series on Nintendo DS and Wii. The game library contains up to 24 events based on the 2008 Summer Olympic Games. In this game, you'll take the role of Sega or Nintendo characters and control them using the Wii remote. All in all, the game was a massive success upon its release. 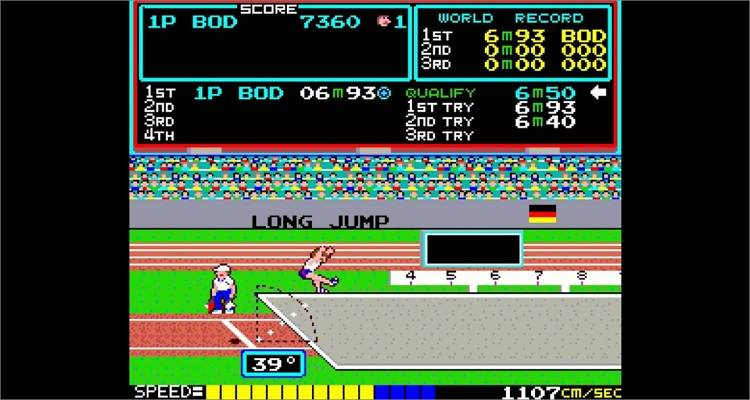 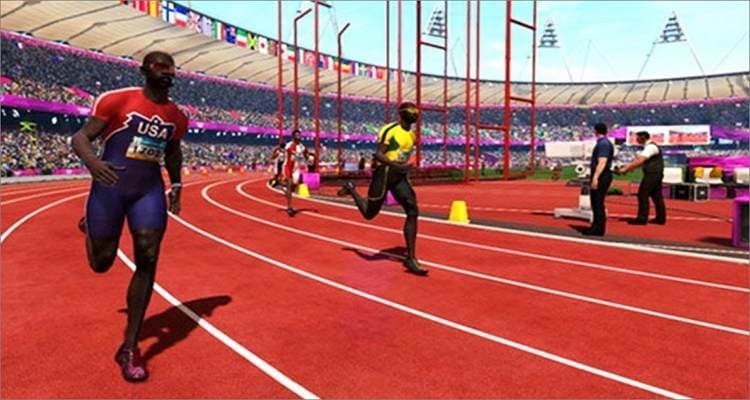 London 2020 – the Official Video Game is the 2012 Summer Olympics' official video game. Again, the game is developed by Sega Studios Australia and is compatible with Windows PC, Xbox 360, and PlayStation 3. Interestingly, Android and iOS versions from NEOWIZ are also available. That said, London 2012 features up to 37 countries participating in 31 events. Players can play offline or compete in the online multiplayer mode. In addition, it's the first game to include cooperative events in local multiplayer modes. 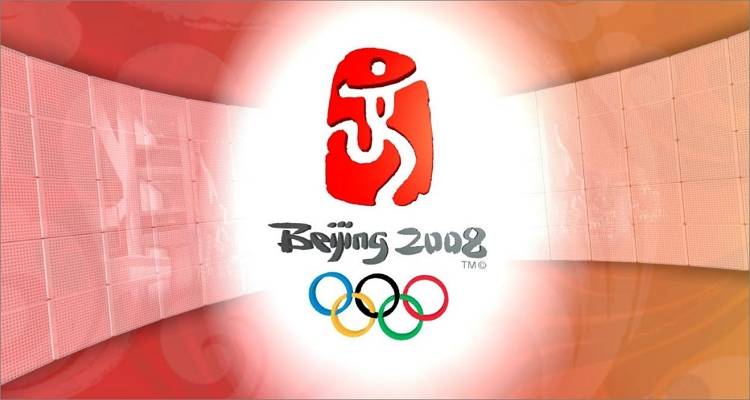 As the name hints, Beijing 2008 is the 2008 Summer Olympics' official video game. Although Eurocom developed the game, it's Sega that published it. Players can enjoy the action on their Windows PCs, Xbox 360, or PlayStation 3. You'll access up to 32 national teams competing in 38 sporting events. Some common sports include 100m, 200m, skeet shooting, high jump, table tennis, etc. And, of course, it supports the all-important online multiplayer mode. 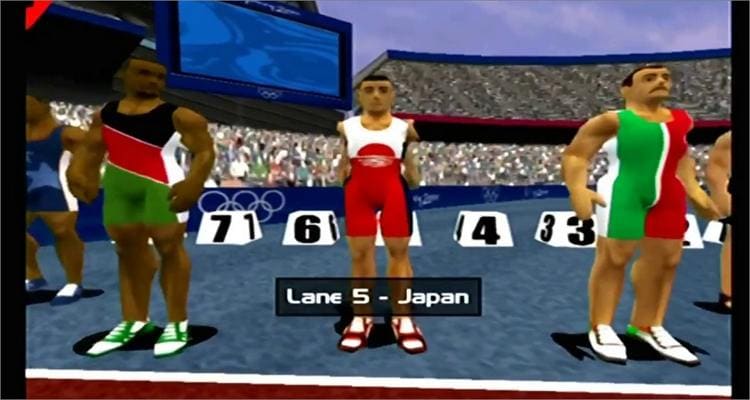 This is the official game for the 2000 Summer Olympics held in Sydney, Australia. The game is developed by Attention to Detail and released for Microsoft Windows PCs, Dreamcast, and PlayStation. In the gameplay, you'll participate in more than ten events, including weightlifting, cycling, javelin, 100m, triple jump, and so on. Individually, the game isn't much different from previous versions. That's because you'll get two action buttons to control the athlete's speed. However, you must improve and qualify your team/athlete for the 2000 Summer Olympics. 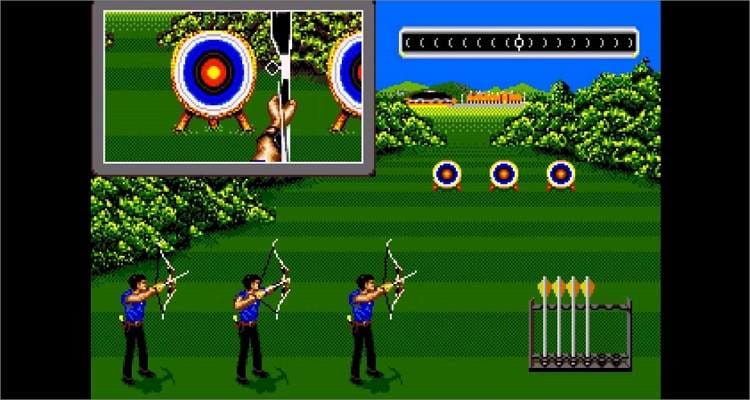 Olympic Gold was released in 1992 by Sega for the 1992 Summer Olympics held in Barcelona, Spain. The video game is compatible with Sega Genesis, Sega Game Gear, and Sega Master System. Each athlete gets a nationality and a fictional name in the gameplay, with the events controlled via button mashing. Sadly, the number of events is quite limited. Players participate in hummer throw, 100m, archery, 100m hurdles, pole vault, springboard diving, and 200m freestyle swimming. 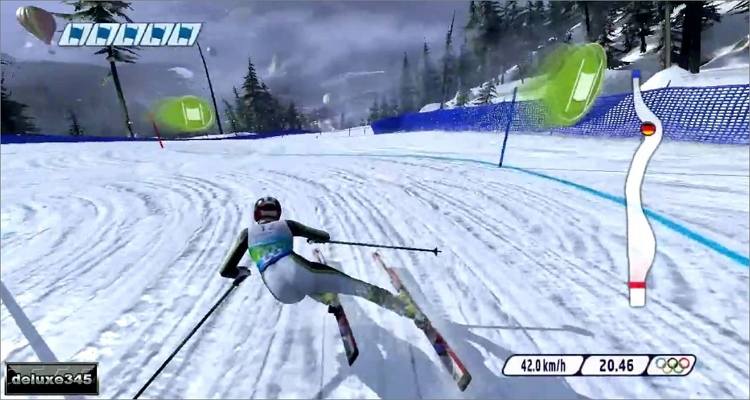 Vancouver 2010 is the official video game named after the 2010 Winter Olympics held in Vancouver, Canada. Sega published this game, although Eurocom developed it for Windows PC, Xbox 360, and PlayStation 3, with GameHouse developing the iOS version. That aside, the Vancouver 2010 Olympics video game features events like snowboarding, alpine skiing, sledding, speed skating, and more. In addition, players will get up to 30 varying challenges spread across multiple events. Moreover, 24 nations take part in the competition. 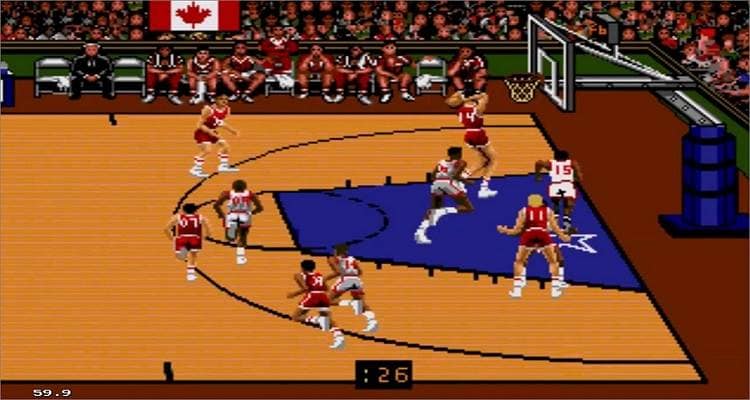 Although not an official Olympics video game, this video game still deserves a spot among the best Olympic video games. This game was developed in 1992 by Electronic Arts for Sega Mega Drive/Genesis console. Team USA Basketball is based on the 1992 Barcelona Olympics and features other national basketball teams apart from the USA. You can choose countries like China, Canada, Angola, Italy, Spain, and more. Players can also create a star-laden team featuring Rik Smits, Vlade Divac, Andrew Gaze, and others. 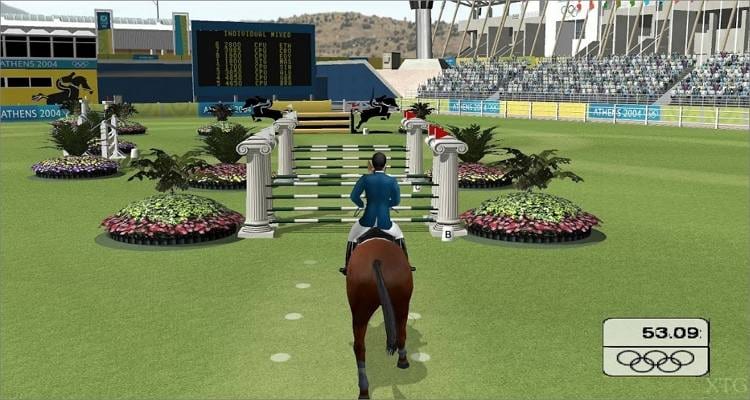 Yes, Athens 2004 is the official Olympics video game for the 2004 event held in Athens, Greece. Eurocom developed this game for Microsoft Windows and PlayStation 2. With that said, the game isn't short of possibilities. Gamers can compete in middle distance running, sprints, hurdles, swimming, long jump, and other popular sporting events. The playable nations include a record-shattering 64 countries, including the UK, US, Poland, Canada, Kenya, Singapore, and more. 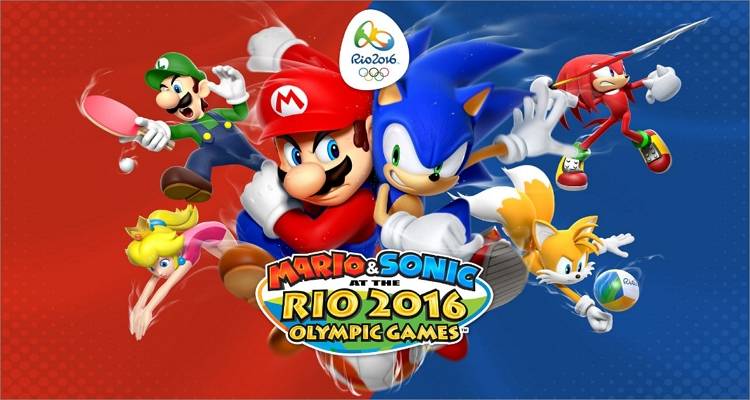 Last but not least, you can play the 2016 installment of the Mario & Sonic video game released in 2016 by Nintendo. This crossover sports game is compatible with Nintendo Wii U, Nintendo 3DS, and Arcade platforms. As expected, the game features a collection of Olympics sports mini-games with characters from Sonic the Hedgehog and Mario series. Other available characters include Diddy Kong, Rouge the Bat, Espio the Chameleon, Zazz, among others. Each character boasts individual stats for speed, technique, and power. 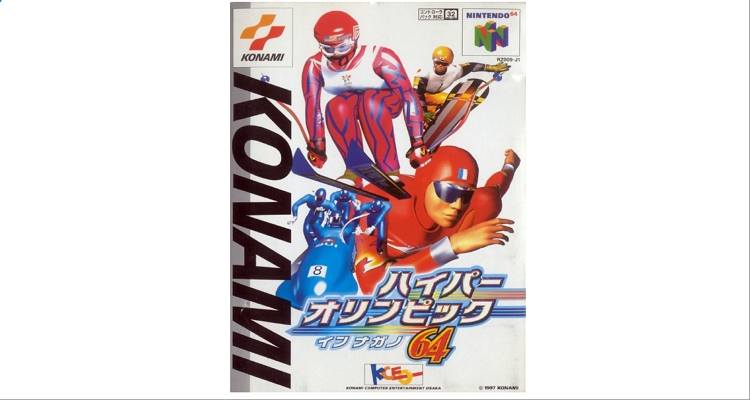 Nagano Winter Olympics '98 is a sports game developed by Konami in 1998 for Nintendo 64 and PlayStation. This video game is based on the '98 Winter Olympics and comes with up to ten Olympic events. You'll compete in skiing, skating, curling, snowboarding, and more. In the game, you'll find up to two game modes – Championship and Olympic. The Championship mode lets players compete in up to seven events winning performance points and getting gold in the end. On the other side, you only need to select an event and compete to win gold in the Olympic mode.

Part 3. The best way to record the greatest 2021 Olympic moments

Of course, you may want to record some Olympic games video highlights and save them for future playback. So, how do you go about this? Simple, install Wondershare UniConverter on your macOS or Windows computer. It's an excellent all-in-one tool that allows users to easily capture computer screen events with lossless quality. With the screen recorder function, you can take high-quality MP4, AVI, or FLV videos with unique annotations, picture-in-picture effects, and voice narrations. What's more, UniConverter features a fast video converter for editing and converting videos and a DVD burner for saving your Olympic moments on a DVD or Blu-ray disc.

Best screen recorder and video editor for macOS and Windows 10/8/7.

The best DVD burner for macOS and Windows 10/8/7 computers.

Below are the steps to create Olympic games video clips using Wondershare UniConverter: 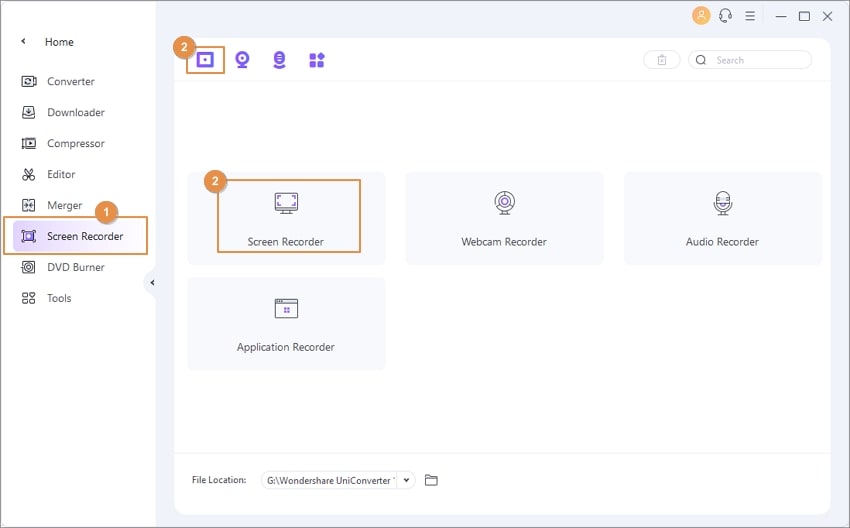 Step 2Launch the game and crop the capture area.

Now launch the screen you wish to capture and then crop the capture area by dragging the frame inwards or outwards. Another option is to choose Full Screen or Custom. You can manually enter the video frame dimensions you want to record with the Custom mode and then tap Lock Aspect Ratio. This gives you a more precise video frame.

Do you want to capture the computer screen with system sounds like mouse clicks and keyboard sounds? Well, choose a sound device on the System Audio section. Then proceed to the Microphone menu and select a voice input device before choosing a PiP device on the Webcam section. 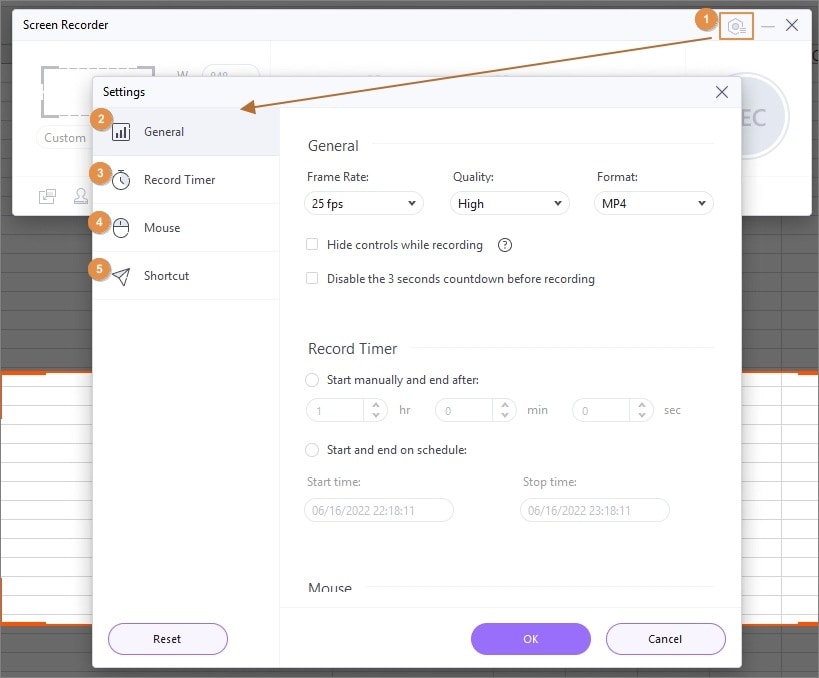 After that, click the gear icon below the REC button to launch additional settings. Here, you can select MP4, AVI, or FLV as the output format. You can also choose the video quality, frame rate, and folder path. Furthermore, you can manually enter the recording timer and select the custom keyboard shortcuts.

Now crosscheck if the capture area is perfect, and then press REC to begin recording. Voila! You can now record and save special moments of the 2021 Summer Olympics with UniConverter. 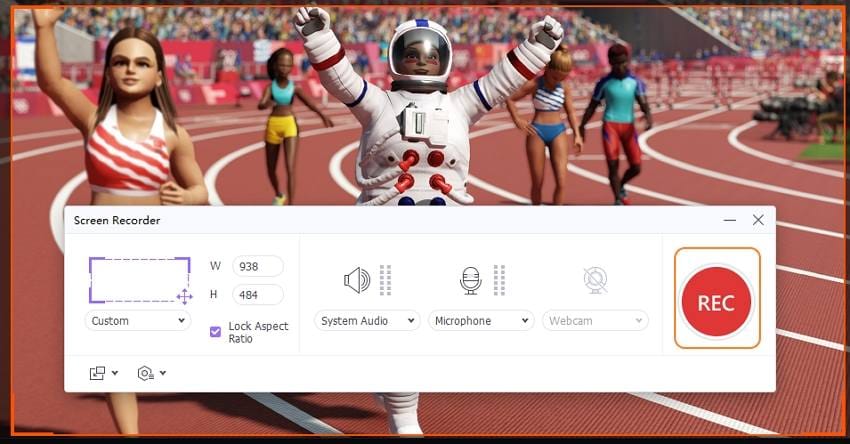 These are the best Olympic video games to play this summer as you wait for the electric event. Take note, however, that some of them may not be compatible with modern PCs and game consoles. Whichever the case, use Wondershare UniConverter to record and save memorable moments of the 2021 Tokyo Olympic Games. Have fun!

How to record gameplay with Nvidia screen recorder: A step-by-step guide makes it easy

Since Geforce Experience is next-level software for gamers, this article introduces the step-by-step guide to using Nvidia screen recorder for gameplays.

Screen recording with Facecam can help you make the perfect desktop tutorial. So, this article will introduce you to seven excellent Facecam recorder apps.

How to Record Picture-in-Picture Video in 6 Effective Ways

This article will show you six straightforward and effective methods on how to record picture in picture video on Mac or Windows.

9 Methods to Record Webcam and Screen at the Same Time

In this simple tutorial guide, you'll learn how to camera record screen and webcam concurrently on your desktop.

The Ultimate Guide to Create PIP Videos in Camtasia

Open this article to learn how to use the Camtasia Picture in Picture function to add a video overlay on a desktop screen recording.

How to Make a Picture-in-Picture Video with Wondershare UniConverter

If you want to create an online software tutorial on your computer, read this article to learn how to add a Picture in Picture effect.

Do you want to record a lecture or game with Picture-in-Picture on your computer? This article has several simple methods.