A decent PSP video converter must be quick, be able to recognize variety of different formats, must have a couple of other editing tools to make the clips useful, and must be lightweight so as not to put overhead on the hardware resources the computer has. Furthermore, it is also imperative that the PSP converter must be platform independent, i.e. it should be compatible with at least two types of operating systems.

Keeping all the above ingredients in mind, the following sections discuss about some of the best PSP video converter applications that can be obtained and used quite easily.

Part 1. What is PSP video format

Generally speaking, a PSP video format is an extension of a visual media file that the Sony PlayStation Portable device recognizes and plays. Although PSP can read AVI, , DivX, etc. formats, the one that it is most comfortable with and can run flawlessly is MP4. Also, due to the screen size of PSPs, the videos should be of 480p x 272p quality, and therefore, a good PSP file converter must be capable of changing the resolution during the conversion process as well.

When you want to transcode a video to a PSP compatible format, the best PSP video converter that you can find, and that is also appreciated by millions of users across the world is UniConverter by Wondershare. Wondershare UniConverter is a cross-platform program that can be installed on both Mac and Windows operating systems. In addition, UniConverter is capable of reading and recognizing 1000+ formats for conversions, thus making the tool useful for almost all professionals that directly or indirectly deal with media files.

The process of converting a video to PSP supported format using Wondershare UniConverter is given below:

Start Wondershare UniConverter on your computer (Windows 10 here), while making sure that you are on the Converter category, click the Add Files from the center of the right pane, and when the Open box appears, locate, select, and import the source video that you want to convert to PSP to the application.

Click the Output Format menu from the lower section of the right window, go to the Device tab, click to select the Games category from the left pane, and pick the PSP from the right. Note: Although selecting the PSP preset converts any video format to MP4 with 480p x 272p, if the source media is already in MP4, UniConverter only changes the resolution which may reduce the size of the file after such compression.

Define a destination folder in the File Location field present at the bottom of the right window, and click the Convert from the right of the imported file to use Wondershare UniConverter as a PSP converter.

After the transcoding is done, go to the Finished from the top of the interface, and when the next window appears, click the Open File Location to get to the output folder to access the converted video from there.

You can learn how to use Wondershare Free Video Converter as a PSP video converter by following the instructions given below:

After downloading Wondershare Free Video Converter from the https://videoconverter.wondershare.com/free-video-converter.html link and downloading and installing the program on your computer (Windows/Mac), launch the application, confirm from the top that the Convert tile is already selected, click the Add Files from the center, and select and import the source video to Wondershare Free Video Converter for conversion. 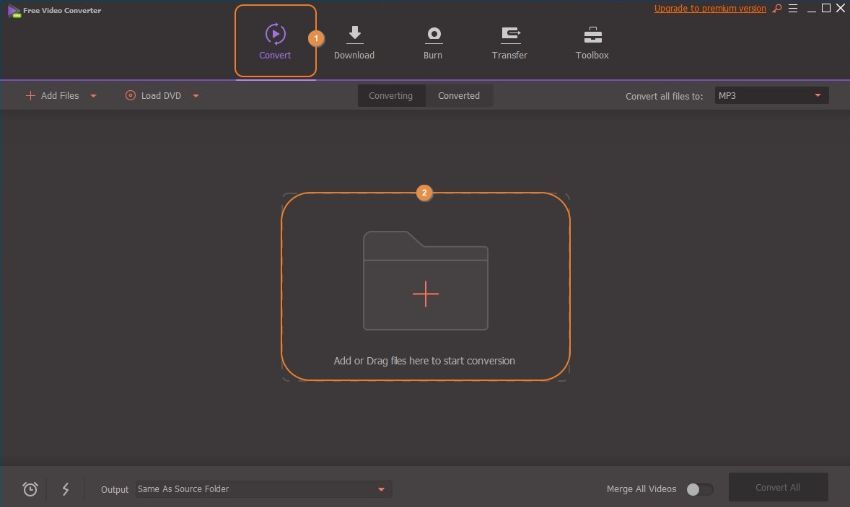 Click and open the Convert all files to menu from the upper-left the area of the window, go to the Device, select the Games from the left list, and click the PSP preset from the right. 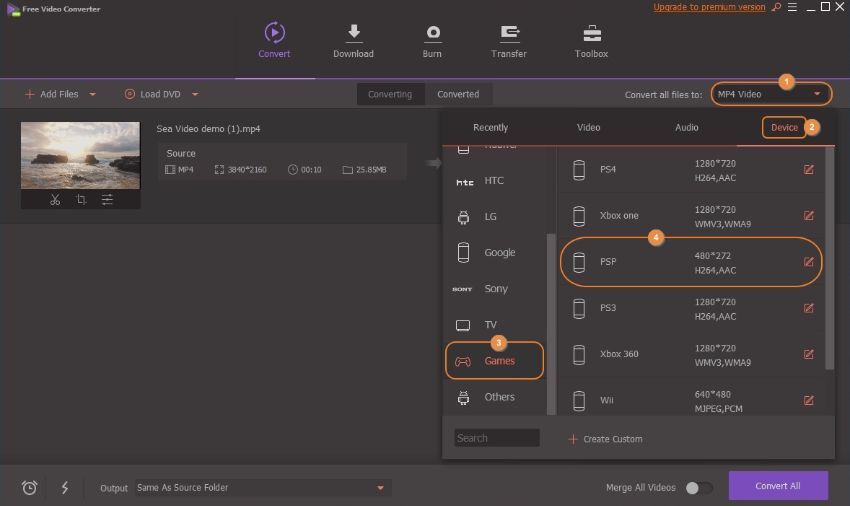 Define a destination folder in the Output field that is present at the bottom of the interface, and click the Convert from the right of the added file to use Wondershare Free Video Converter as a PSP converter to convert the video to PSP compatible format. 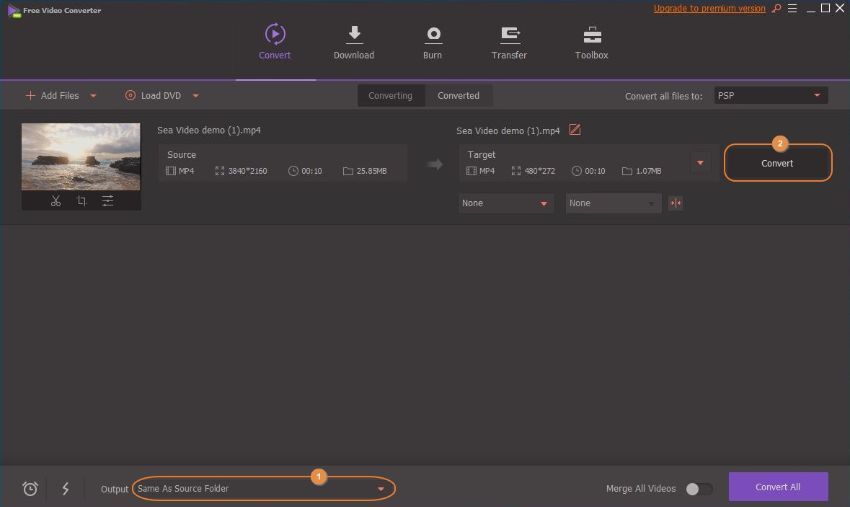 Go to the Converted from the top, and when the next window appears, click the Open File Location icon to get to the output folder to access the file from there. 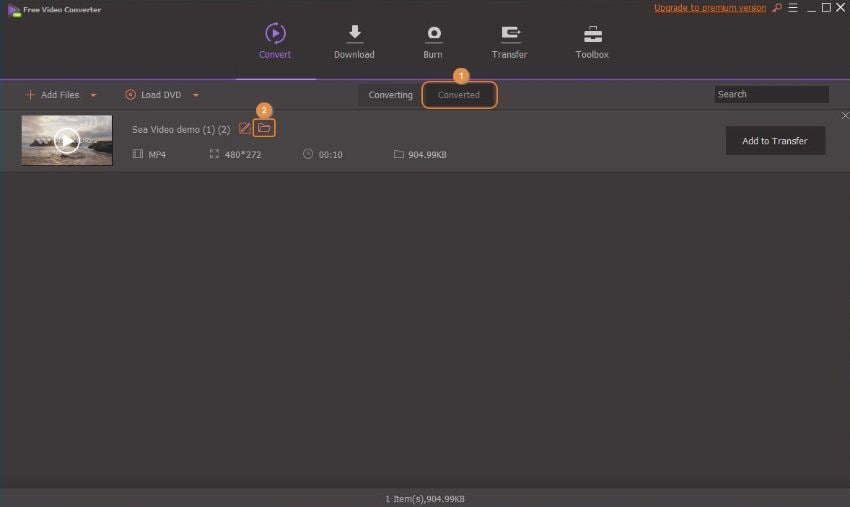 Part 4. Other 4 PSP video converter is for Windows/Mac/online

In addition to the above applications, a couple of other solutions that you can use as PSP converter online and offline are as follows:

Online Converter is a free PSP video converter online tool that doesn’t require any subscription plan, and neither does it ask for any donations or any kind of funds for that matter. The web app can accept the files from your local computer or their URL in case they are published somewhere on the web, and can convert them to PSP format for free. 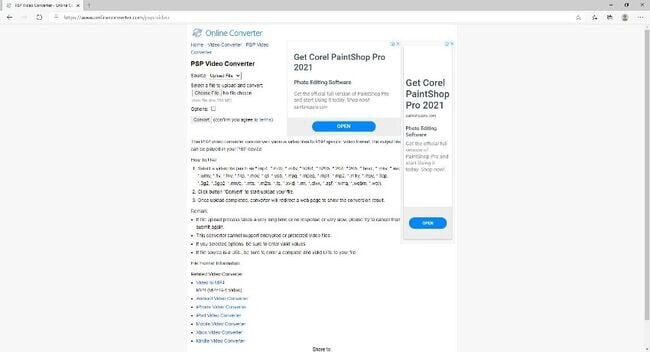 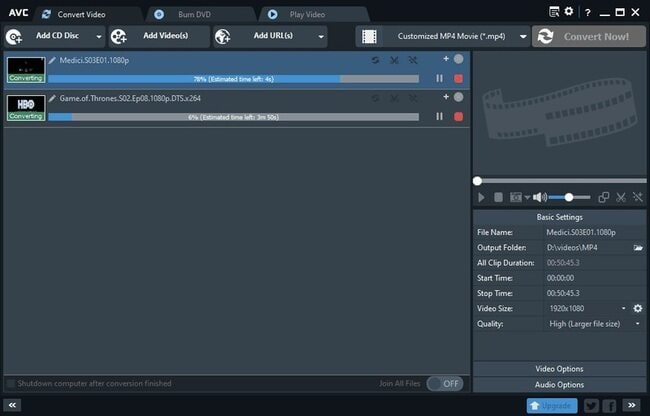 Available for Windows and Mac computers in both x86 and x64 architectures, Xilisoft Video Converter Ultimate is a tool with a fairly simple and intuitive interface, and can be operated even by the non-technical users. This is the reason the app can be considered the best PSP video converter, and can be a good competitor to the tools discussed in the earlier sections. 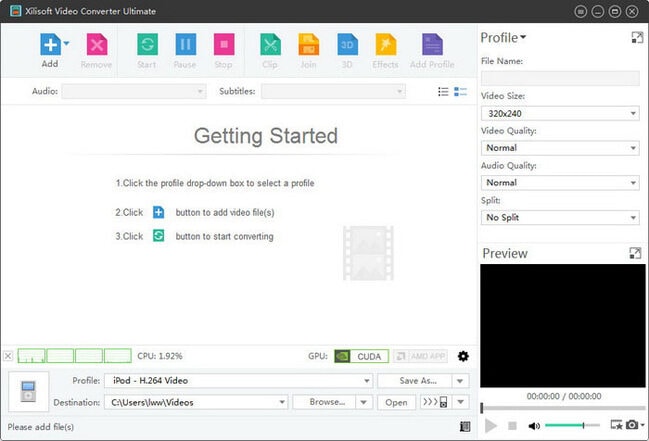 Although a paid version is also available for this app, WinX Free PSP Video Converter is sufficient enough to serve the transcoding purpose pretty well, as long as you don’t require a professional output that needs to be distributed among the mass for monetary gains. The free version is equipped with 30 video and 20 audio codecs. 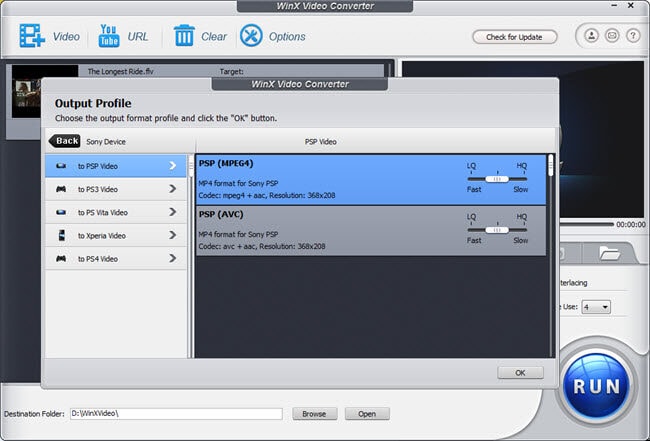 When talking about Sony PlayStation Portable supported formats, if you don’t have a media clip with a compatible extension, you definitely need an efficient PSP video converter such as Wondershare UniConverter to transcode the footage. If you are looking for a free online or PC-based solution, apps like Wondershare Free Video Converter would be your best bet respectively.