All about Macy's Thanksgiving Day Parade in 2022

Thanksgiving Day is an annual national holiday celebrated mainly in the United States and Canada. This festival celebrates a great year of harvest and other good things with the blessings from the past year. The family and friends gather up for a feast on the fourth Thursday of November to show their gratitude for each other's excellent year. The origin is, actually, related to the ‘pilgrims’ in 1621 who coined the term ‘Thanksgiving.’

The tradition of thanksgiving uprooted itself from the religious origins over time. It allowed people from all creeds and colors, from almost every state to actively and freely participate in the tradition. Tracing back to this day's originality in the 1920s, the City of New York was a historical witness to a brand-new tradition. A Parade initiated by R.H Macy and Co. to celebrate the day came into being and was gradually named Macy’s parade or Macy’s day parade. It is celebrated even today, with the same level of enthusiasm and allows the whole world to be a part of it.

Part 1: What is the history of the Macy's Thanksgiving Day Parade

All of the United States used to soar high during the twenties, and New York was not left behind. The iconic departmental store - Macy's emerged as a public platform in 1922. R.H Macy and Company gained several potential competitors in a few years of their journey. It forced them to open in several regional locations throughout the city.

The original flagship store in Manhattan was so successful that they had to expand it in 1924. This storefront covered an entire block stretching from Broadway to Seventh Avenue along with street number 34. To celebrate the enormous success and the introduction of the ‘World's Largest Store,’ Macy's decided to throw a Parade on Thanksgiving Morning to the entire New York City. It was only about the next big holiday on the calendar- Christmas and had a subtle marketing undertone to it. 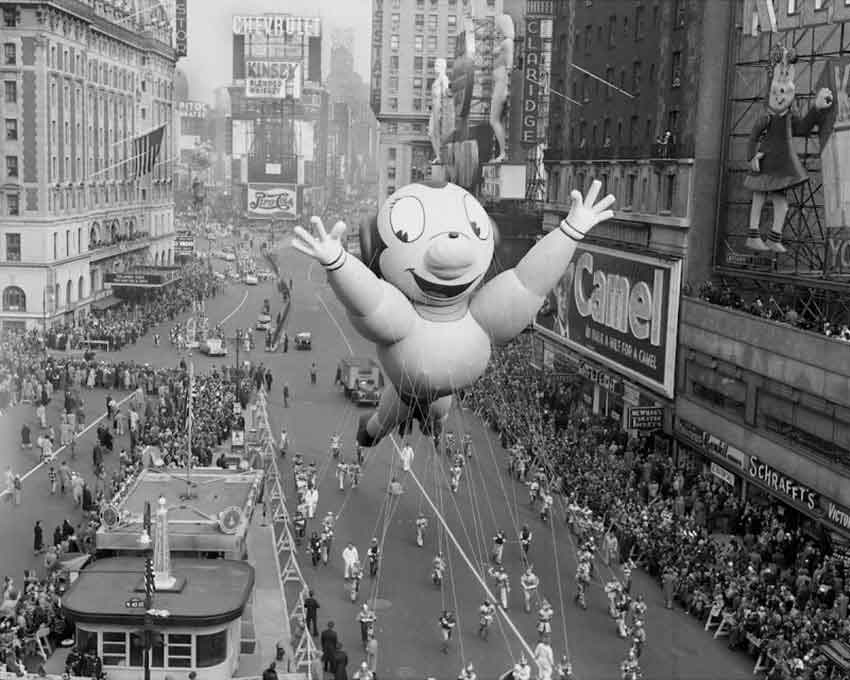 On the beautiful morning of November 27, 1924, Macy's started at 9 am by giving 'Special Thanksgiving Treats' to the children of New York City. With Police Escort leading the start of Macy’sParade from the 145th Street and Convent Avenue. The first-ever Parade extended up to 6 miles. It was already a challenge for those who started from Harlem to Harold Square.

The first-ever Macy's Thanksgiving Parade was widely themed according to the Macy's Christmas window display in the year 1924. The ' Nursery Rhyme ' theme featured Mother Goose favorites like the ' Little Miss Muffet,' 'Little Red Riding Hood,' or the 'Old Woman who lived in a Shoe.' The Department Employees took part in the parade dressed as Clowns, knights and countryside cowboys.

The Parade also showcased some of the animals from Central Zoo, like bears, camels, elephants and monkeys, which took it to another 'circus-like level.' The parade's central iconic attraction was the massive ' Santa Claus ' float, at the very end, on a Reindeer driven Sleigh on top of a mountain of ice. And adding to the frost on the cake, was four Bands, playing to the Festive March.

At the end of the Macy's Thanksgiving Parade, around Ten thousand people cheered for Santa Claus when Kris Kringle was crowned the "King of the Kiddies." Followed by children rushing to the store window to see the miniature nursery rhymes characters on moving belts and frolicking in their parade in front of a facade.

The parade was such a huge success that Macy's announced that it'd stage the parade again the next year. And since then, Macy's Thanksgiving Parade quickly became a holiday tradition in New York. The Zoo animals were replaced by character balloons to spread a happy vibe among the youngsters. In 1927, helium balloons were introduced, which has still clawed its roots to the present day.

Due to the course of time, the Macy's parade has been snipped off to a length of two to three miles and bloomed with balloons, marching bands, celebrities and cheerleaders.

And still, now, Santa Claus remains to be the Showstopper of the Macy's Thanksgiving Day parade, and his arrival to Herald Square marks the Christmas Season in the City.

Part 2: How is the parade different this year

Since 1924, Macy's Thanksgiving Parade has never been a miss-out to date. However, amidst the global pandemic which already claimed millions of lives, Macy's decided to carry out its traditional Macy's day parade following the format they used for the 4th of July Fireworks display. Macy’s day parade this year has subsided to an 'Onscreen-only' event. Though Macy's thanksgiving hours started to be filmed from 1953 and were live-streamed in the following years, it will be somewhat different from the rest of them this year.

The most significant difference the spectators will follow up is the absence of 'liveliness' in the parade. The parade, which turns 94 this year, is still scheduled to air on Thanksgiving, but virtually. The Macy's parade usually draws around four million spectators and over half a million broadcast viewers every year since it is streamed. This year, Macy's confirmed," the celebration will shift to television only special presentation," with its signature mix of character, helium balloons, floats, Clowns performers and the Showstopper Santa Claus. 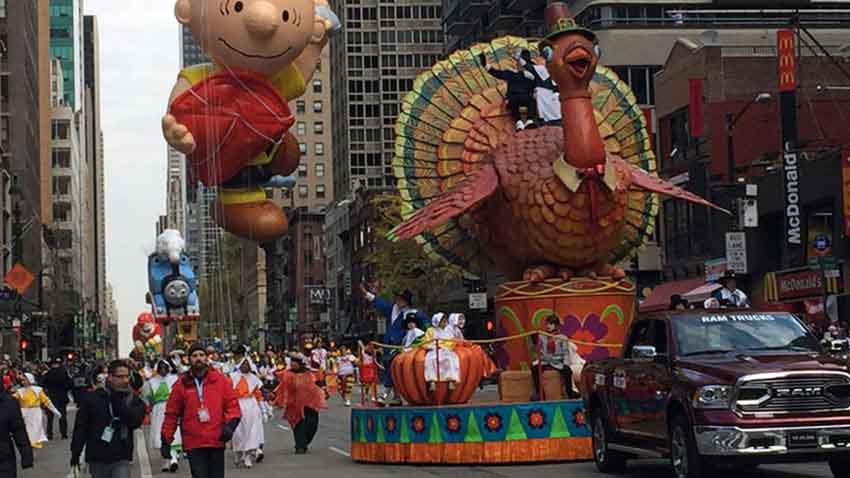 All the air floats will be carried out by 'specially designed anchor vehicles' instead of human handlers. The performances will be shot in an enclosed Broadway platform, maintaining social distancing, over two days. Any foreign performances, school or college performance, and bands have been deferred until 2021. It will be the first time in almost a century where the Macy’s day parade will not be executed in its good old traditional fashion.

Macy's reports states, there will be a reduction of approximately 75% of the participants this year to maintain social stability and safety. There will also be a 'no invitation balloon inflation event.' Furthermore, participants have to be above 18 to take part in the parade. All of the participants are required to wear face coverings and practice social distancing to spread awareness worldwide.

Part 3: How can you watch the parade 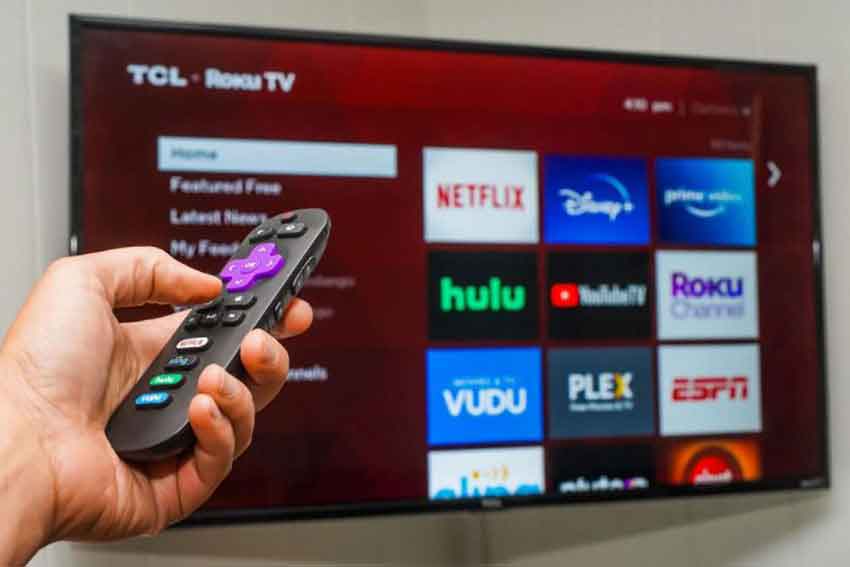 Apart from the TV, some online streaming platforms are also rumored to showcase the Macy's parade, like YouTube TV or Hulu+, etc. It is also accessible to any device having the live NBC feed. The NBC app on both iOS and Android will have Macy’s thanksgiving day parade live stream.

Part 4: Where does the Macy's Thanksgiving Day Parade take place

Since 1924, Macy's Thanksgiving Parade has been a tradition associated with the USA. The parade has always taken place in Manhattan, New York. The first year, it started from 145th Street in Harlem and winded up at Macy's Flagship store in Herald Square.

The 1930s brought forth the introduction of inflated balloons. At that time, the parade took on to the south of Amsterdam Avenue, turned east to Columbus Avenue, to Central Park West and ended up at Macy's. 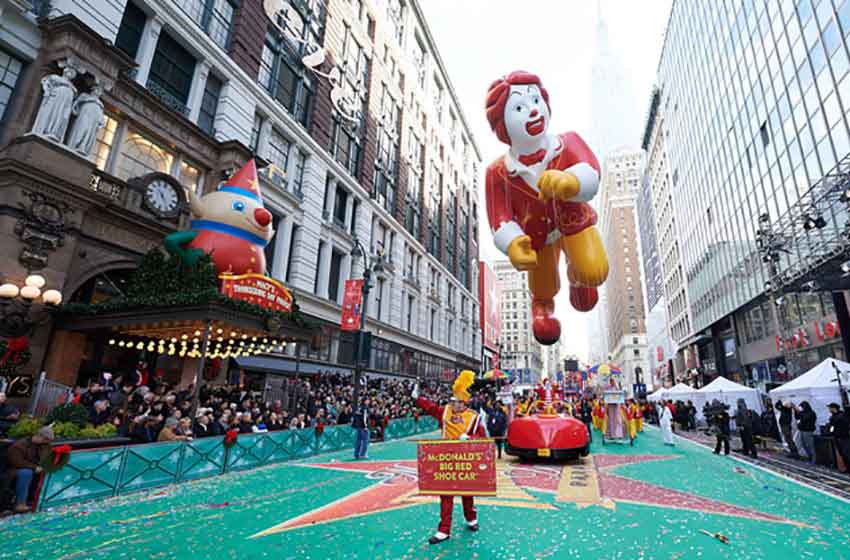 After following the old Macy thanksgiving day parade route for almost half a century, in 2009, a new course was established. It provided more alleys, wider viewing space for the spectators, and passed through the famous Times Square. 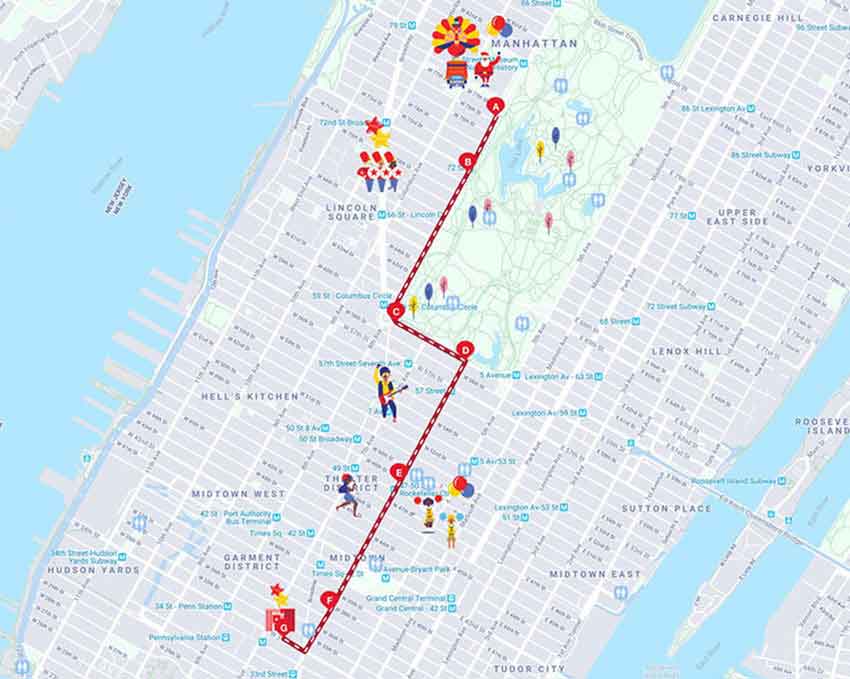 After a couple of years, the route to Times Square was eliminated. Consequently, the new route of Macy’s Thanksgiving day parade rounded from east of Columbus Circle, along Central Park, and then ended up in Herald Square. To provide a better view, NBC telecasts the whole parade from parts of the city and living streaming from various online platforms.

Unlike Macy’s parade 2019, the current year will witness the first time in history, Macy's Thanksgiving Parade 2020 digitally. Susan Tercero, the executive producer of Macy's quotes," while it will undoubtedly look different in execution, this year's Macy's Parade celebration will once again serve its historical purpose to bring joy into the hearts of millions across the nation."

Macy's Thanksgiving Day parade is an iconic annual event. It is an integral part of Thanksgiving in New York City, which is also a major crowd-puller. For the first time in history, Macy’s will organize the parade not on the roads but only on the screens. The saddest part is that you cannot see and cheer on the road with your pals! However, you can enjoy Macy's thanksgiving day parade live stream from the comfort of your home on-screen, on TVs, phones, or any other digital modes. So, if you have missed the 2019 Macy's thanksgiving day parade, take this opportunity right this year!