How to Get Twitter Following – Increase Your Fan Base

Most people on social media have twitter accounts, but many don't have the following they desire.

Some of the ways to increase twitter following on any given topic are as follows.

One way to create a first impression, and to increase the interest of your audience to retweet your post is to use a catchy phrase.

The headline on any current topic must be relevant to the discussion at hand, you must stick to this basic principle.

Having a catchy phrase is just the first part of the process; the content which is the most informative part of the tweet, needs to be to the point.

These twitter videos need to be entertaining, engaging as well as informative and must provide current information that is authentic to the current issues.

There is a high probability that you will have more fan following if you upload catchy, authentic, and reliable content paired with short videos.

One glaring example that comes to mind is the 8-year-old Boston bombing victim, whose tragedy was used by fake twitter account to generate donations. Lots of people started following the fake twitter account but consequentially, he was found guilty of spreading false information and was blocked permanently from the platform.

As we know, adding videos to your twitter feed adds value to your content. The tweet video makes your tweets engaging and illustrative to your audience, but there are limitations associated with uploading these videos.

There are two (MP-4 and MOV) formats out there to upload your tweet video. MOV format can be used but requires QuickTime Media Player on your computer and mobile device.

If your device does not have Quicktime Media Player you will have to convert the file into different formats. MOV also compresses the file size, which affects the overall quality of the end product.

Why is the MP4 Format Preferable?

MP-4 is considered the gold standard for uploading these tweet videos and is used by most customers.

It also has very few compatibility issues, as far as adapting to different devices or current technologies.

Some of the ways to quickly increase Twitter following are:

What are Twitter's requirements for video formats?

The twitter videos can't be more than 2 minutes and 20 seconds long and the maximum file size should be 512MB. If either of these requirements are not met, Twitter will not accept the upload or you will have to edit the video.

The range of resolution Twitter video allows is between 32x32 and 1920x1200. For better experience for your viewers, you should opt for higher resolution for better quality video. Most video editors stick to a frame rate of 40 fps.

Another requirement of twitter video is Aspect ratios, which ranges from 1:2.39 to 2.39:1. Strong aspect ratio will allow you to maximize the amount of space your video can take up on the platform, and the bigger the better. More visibility means more views and hopefully more engagement.

As long as the requirements meet the conditions of MP4 format, Twitter videos are suitable for MP4, which is considered the gold standard in the industry.

Below is the list of online tools that will help you to convert other video formats to MP4.

Various files can also be added to the program during conversion. However, it does not support video conversions to MP3 and other audio formats.

The best option Wondershare Uniconvertor offers is batch conversions on multiple formats. This convertor can support more than a thousand video formats and other standard formats.

You can also transfer videos from various devices via USB cable.

Important changes have been made to its code and framework. The speed of version12 is twenty times faster than version11.

The interface of this software is really easy to use, all relevant information can be found on the main page of the website. It is also interactive, which makes it extremely functional.

Wondershare has a fairly good video quality of 1820x720 pixels which is good enough for twitter videos.

The software allows you to both edit online videos through browser, and also offers the application for free.

The good part for the users is that Wondershare is compatible with both Mac and Windows.

Handbrake is a convertor that works with file types like MOV, MP4, MKV, MPG, AVI and WMV. HandBrake opens web videos in FLV, WEBM, MP4, and many other formats. 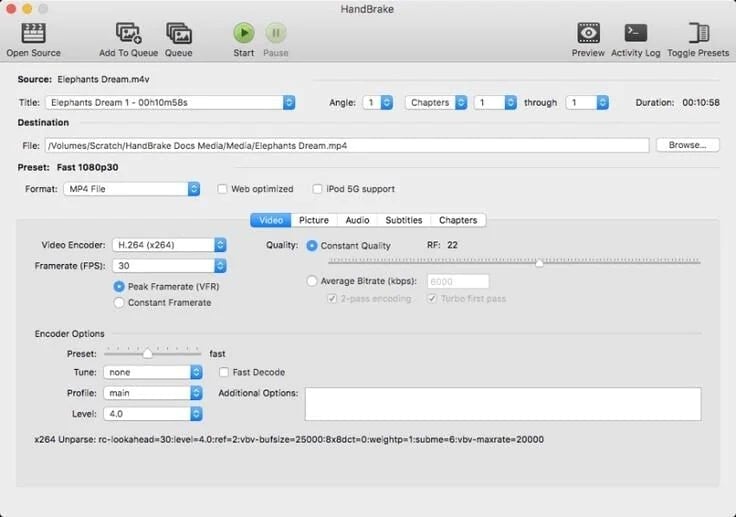 The conversion speed for Handbrake is 200 frames per second.

HandBrake also allows batch conversion but it does it very slowly, and also has limited choices to convert your video formats.

HandBrake is very intuitive and easy to use because the menus are simple to navigate. Video previewing is not allowed, but it has a lot of other features. 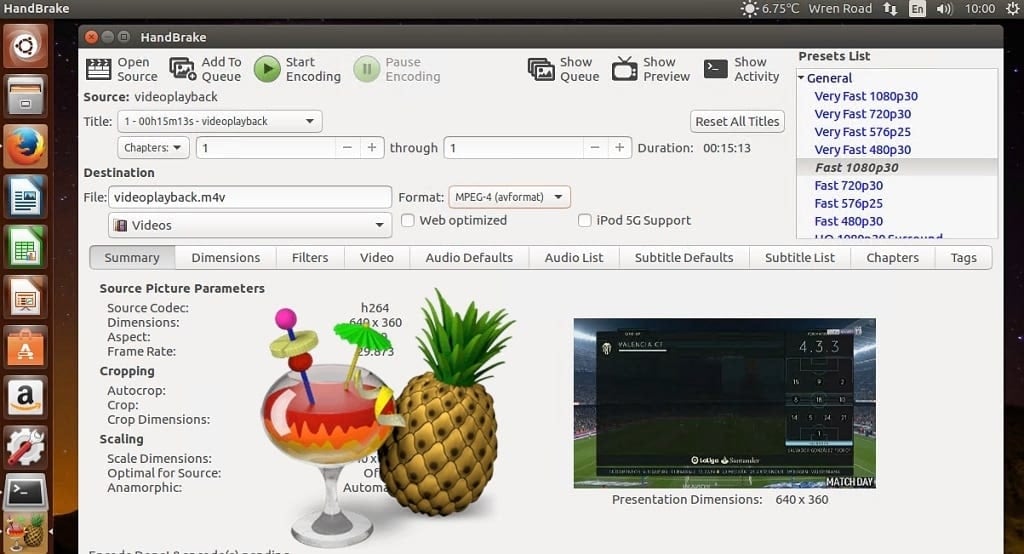 You can set your RF value on HandBrake by using a slider at "Constant Quality" between 50 (low quality) and 0 (highest quality). "20" is the default value which can be considered adequate for a DVD copy.

It is a free open-source transcoder for digital videos that you can access through a web browser.

HandBrake is compatible with recent versions of macOS, version 1.4.0 is a Universal Binary supporting both Intel and Apple Silicon Macs.

This is an ad-supported freeware multimedia converter using GUI for three conversion tools, such as CxImage for images, FFmpeg for videos and Mencoder for audios. Format Factory can convert any video to MPG, MP4, AVI, 3GP, FLV, SWF, WMV etc.

The conversion speed of Format Factory is relatively slow but is of the highest quality.

Various options are available on Format Factory to batch convert your different media formats into a single format. You can customize every media file and change its output properties such as bit rate, resolution, codec etc.

Format Factory offers a simple interface where all formats are easy to find, along with the ability to pick your favorite color for your interface. All you have to do is click on the SKIN and pick your color.

Whether it is a single file or multiple files, the quality of the edited videos of Format Factory are of high quality, and the good news is that it is absolutely free for personal or commercial use. 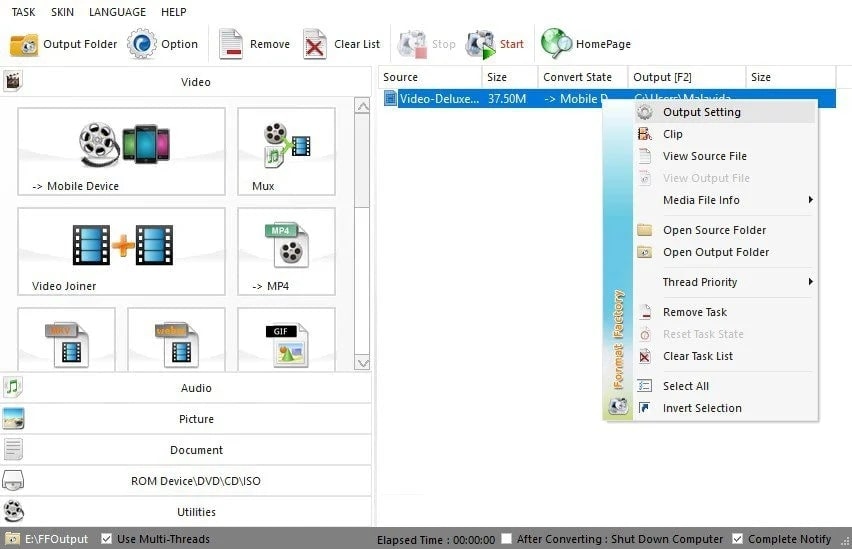 Format Factory is compatible with all popular video formats including MP4, MPG, AVI, 3GP, WMV and SWF, along with audio formats like MP3, AAC, WAV, OGG, and WMA.

You can convert to AVI, MP4, MP3, DVD, WMV, iPhone, Android by using Freemake Video converter. However, it does not allow batch file conversion. 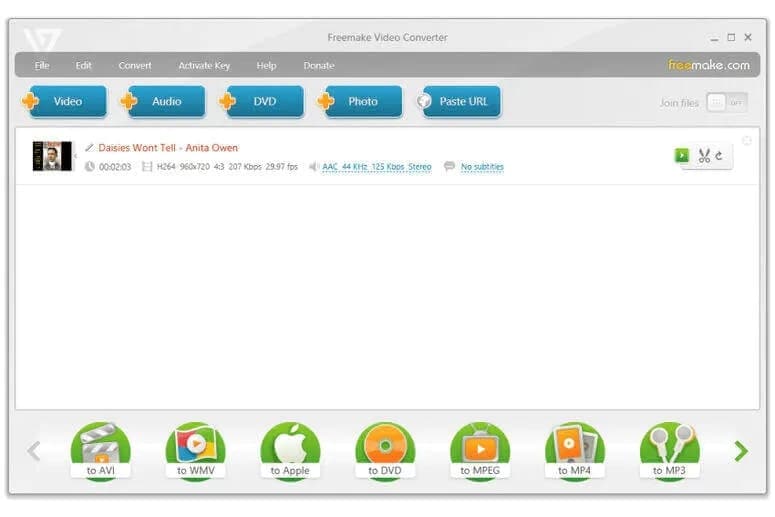 The user interface is intuitive and therefore easy to use, best of all it is free. Its handling of video files is pretty swift, and with a built-in editor it quickly trims clips, and rotates them also. All Freemake software is compatible with Windows 11.

This is a free cross-platform video converter that supports numerous formats as inputs, including MPEG, MOD, MPV, VOB, MP4, AIFF, AC3. It then converts a number of output formats such as QuickTime, DV, TS, MPEG, MPEG-4, AVI.

Once you choose the bit rate MPEG Streamclip will calculate the estimated size of your output file. 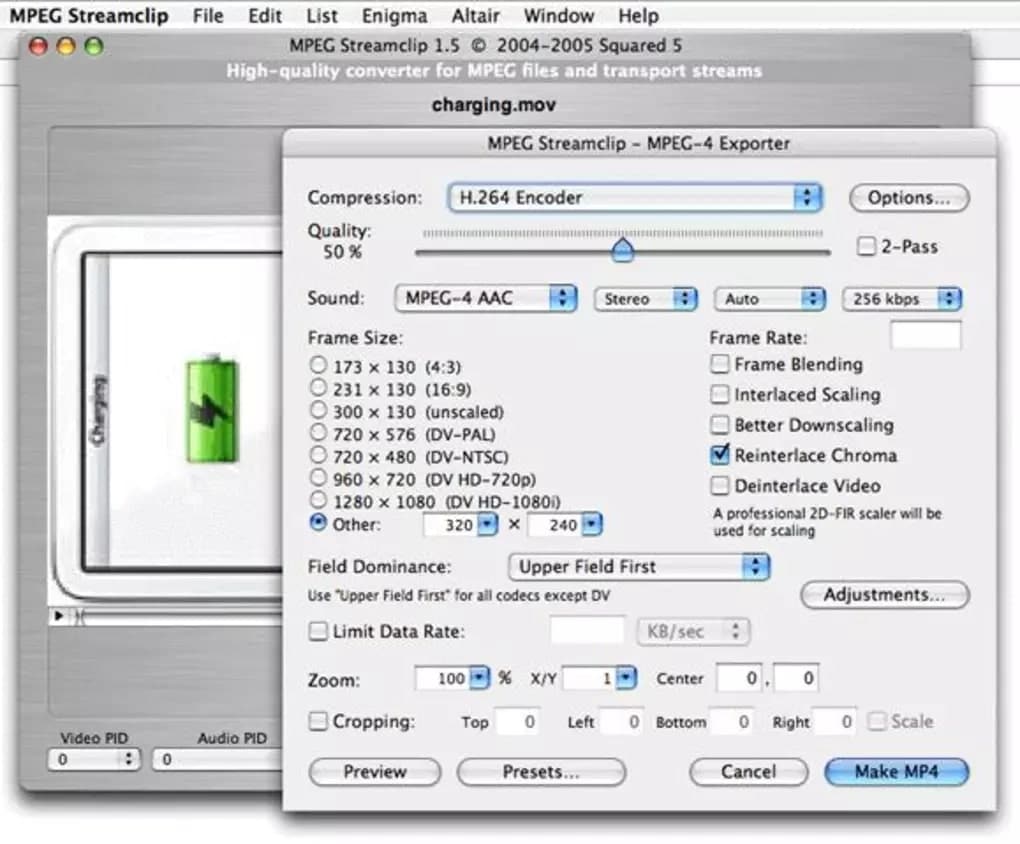 The user interface is very easy to use. 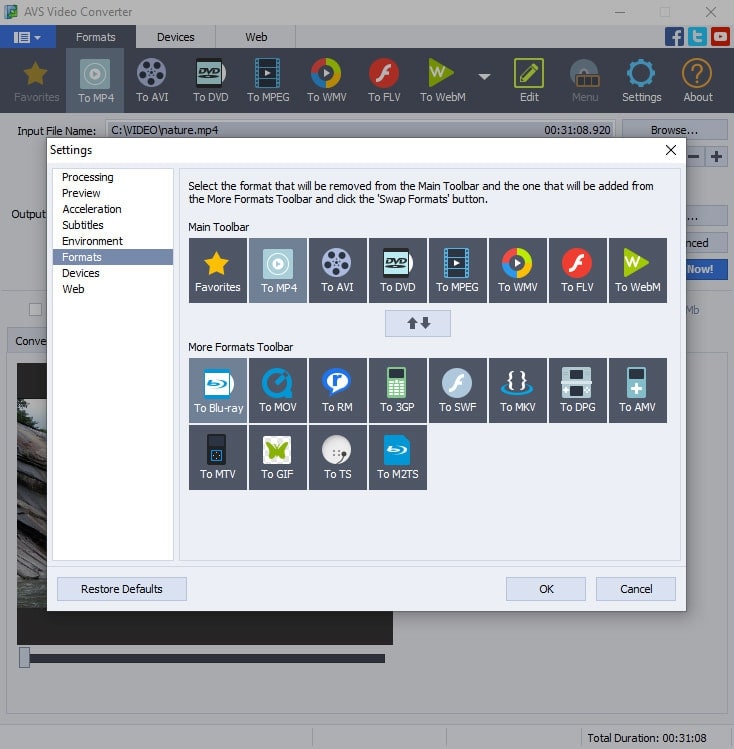 You can save time by using Batch mode for multiple video files, by using hardware acceleration. The conversion speed of AVS Media Convertor is also very fast.

AVS allows you to edit your videos before conversion through a built-in video editor. The interface is plain and is easy to use.

Since it offers multiple options to edit your videos, the quality of your video improves significantly.

Once FFmpeg is installed, it gives access to FFmpeg command, which converts audio files to various types of formats. Some of them are WAV, OGG, MF.

One of the drawbacks of FFmpeg is its very slow conversion speed. However, FFmpeg allows you to batch convert and multiplex almost every video file.

The interface has a steep learning curve and the users need to know how to use proper language and syntax.

FFmpeg offers advanced options that will help you with good quality edited videos at the lowest bitrate.

FFmpeg is a free and open-source software project consisting of a suite of libraries and programs for handling video, audio, and other multimedia files and streams. It is compatible with a large number of SW files.

One limitation of Media Coder is that it is not available for Mac OS which is very important these days. The conversion speed is extremely fast for this convertor. 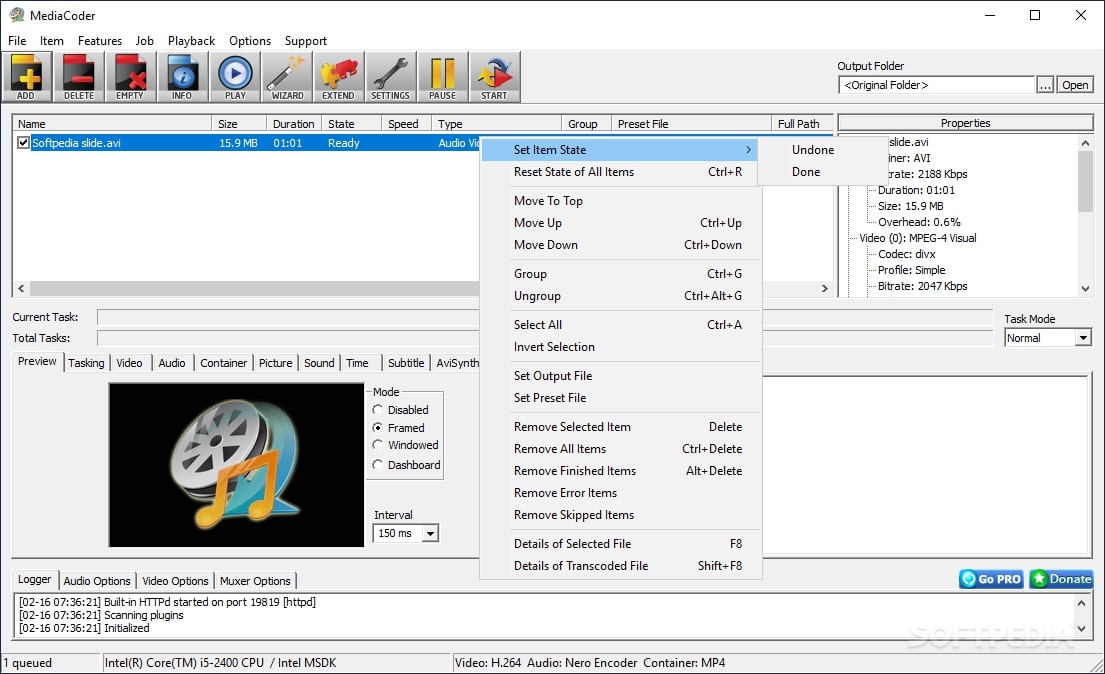 MediaCoder (64-bit) is also an open-source universal audio or video batch converter, which puts together lots of excellent audio or video codecs and tools.

The interface is helpful but also baffling at the same time. The setup process only takes a few easy steps, but it can only be done online.

MediaCoder is a free universal media transcoder which is compatible with iPhone, iPad, and iPod, and other mobile devices.

1. How long does it take to get 1k followers on Twitter?

A compelling profile with your picture, along with tweeting a lot with relevant content. Use extensions and plugins for publishing tools to speed up the process.

Sharing pictures and videos increases your engagement, conversions and CTR (click through rate).

According to Hootsuite's data Mondays and Thursdays around 8 a.m. is the ideal time to tweet. You can tweet a little later in the mornings on weekends.

As per HubSpot, most hashtags are very general and therefore usable by most brands. These include:

According to research by HubSpot, the most used and popular hashtags tend to be very general and can be used by most brands. They include:

Since tweets have a very short shelf life, it's best to spread your tweets 3 to 30 times a day.