As a multimedia professional or an employee working at a digital broadcasting house, if you ever stumble upon a situation where a TRP file is needed, you would need a decent MP4 to TRP converter. With that said, here you will learn about an efficient application that could be of great help when you want to convert MP4 to TRP format right from your desk, i.e., without hiring any professional service provider to get this simple job done for you.

First things first, in general, TRP uses a digital transportation protocol to broadcast high definition videos to the compatible receivers over long distances. Such broadcasts are mostly of DVD quality. To get a bit more technical, a TRP format is a container that holds MPEG-2 video and A3C audio information to form a complete movie file that can be transmitted via broadcasting signals.

The bitter part is, even though if you have a lossy MP4 clip, transcoding it to TRP wouldn’t increase its picture quality. However, an MP4 to TRP video converter would still be able to make your MP4 footages compatible with the players or broadcasting engines that only accept the TRP files.

Part 2. How to convert MP4 to TRP format with Wondershare UniConverter

As discussed earlier, if there is a need to convert MP4 to TRP format, you must have an efficient conversion tool to get the task done. Among all the applications available online today, the one that has received positive feedback from millions of consumers worldwide is UniConverter that is developed by a software giant called Wondershare.

Wondershare UniConverter (originally Wondershare Video Converter Ultimate) is a universal converter that supports more than 1000 formats and is available for Windows and Mac platforms. Besides being a robust MP4 to TRP converter and offering several other transcoding options, the additional features that the application is equipped with to make the software unique in its own way include:

The steps given below clearly explain how to convert MP4 to TRP format with Wondershare UniConverter:

Start Wondershare UniConverter on your Mac or Windows PC (a Windows 10 computer is used here for illustrations), check the left pane and make sure that you are on the Converter category, click Add Files from the main window, and select and import the source MP4 video from your local hard drive to the program. 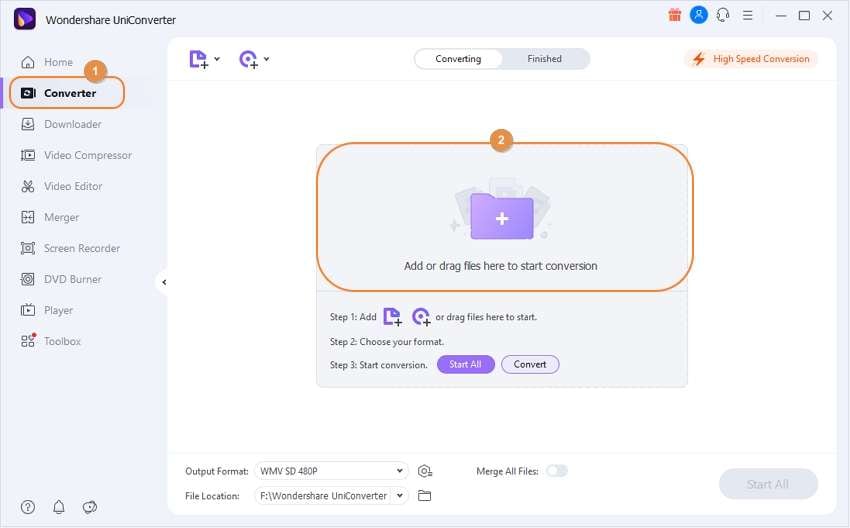 From the lower-left section of the main window, click and open the Output Format menu, go to the Video tab from the top if not already there, choose TRP from the list of formats in the left pane, and pick your preferred video quality from the right. 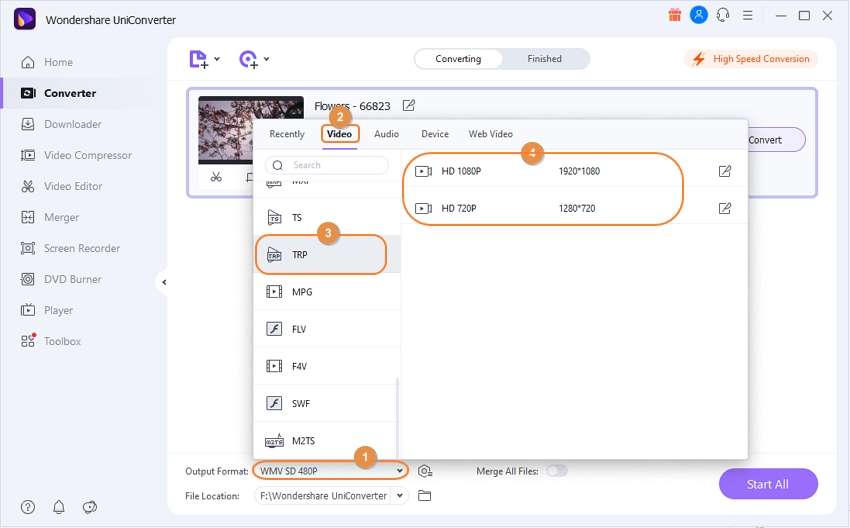 Step 3 Set an output folder and convert it.

Use the File Location field from the bottom-left section of the main window to select a folder where all the converted files should go, and click Convert from the right side of the imported file present in the list. Alternatively, click Start All from the bottom-right corner if you have imported multiple MP4 files to convert to TRP. 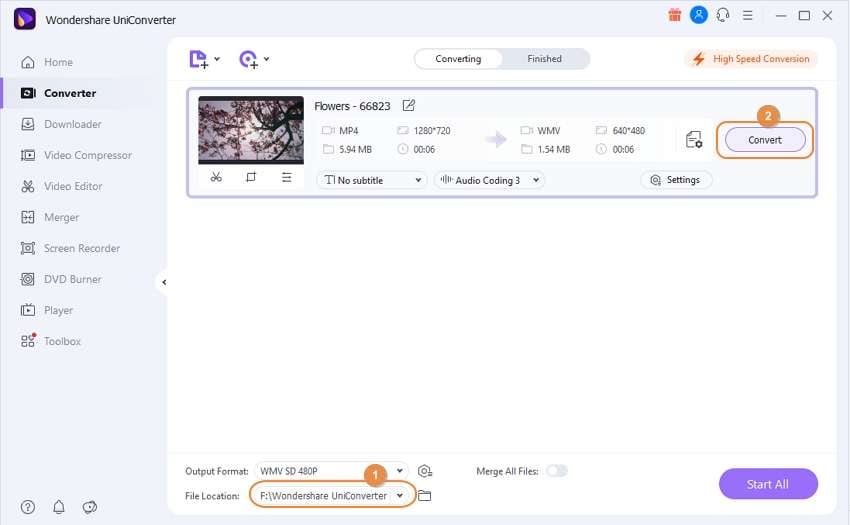 After the transcoding process is complete, click the Finished tab present at the top of the main window, and when the next interface appears, click Open from the right of the TRP file that becomes available post-conversion.

Part 3. How to open a TRP file

There are several methods to play TRP videos on your PC. The two most used ones are listed below:

VLC is one of the widely used media players that is available for all three major platforms, i.e., Linux, Mac, and Windows. The software has almost all the necessary codecs integrated in it, and therefore, regardless of the file type, VLC is able to recognize the extension and play the contents it has.

Wondershare UniConverter is a universal converter, alright! In addition to this, the program also has its own previewer that lets you preview the videos before performing the conversions. This preview window can be expanded to full-screen mode and thus can be used as a full-fledged player to watch all the supported media files. After importing a TRP video to UniConverter, you can click the small Play icon from the center of the thumbnail to launch the previewer.

Part 4: Which is better, MP4 or TRP format

The competition between the two is hard.

While the TRP files are good where high definition videos are to be broadcasted over long distances, the MP4 videos are lossy but are suitable for home viewing where the screens are not enormous in size. Also, most online platforms like Facebook, YouTube, etc. support MP4 format due to its small size and compatibility.

Therefore, to sum up, both MP4 and TRP have their own significance, and according to their purpose and the audience they are intended to reach, you can pick one or the other.

Depending on the requirement of the platform you are planning to work on, you may need a good MP4 to TRP converter that is not only efficient and quick. It also has several other features like media editor, DVD creator, and much more. While most conversion tools have limited features and are confined to merely one or two tasks, Wondershare UniConverter is a complete post-production and multimedia package for both beginners and professionals.